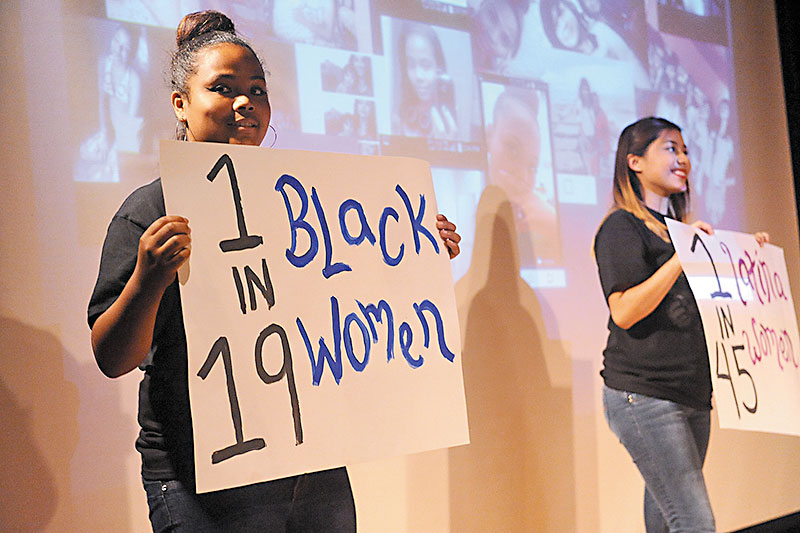 High school students Destiny Harris (l) and Tania Lara perform in "My Life Without You: Teens Impacted by Incarceration and Deportation," Aug. 15. Harris and Lara are summer interns for Youth Rise Texas, which helps teens whose families have been personally affected by the criminal justice and immigration systems learn community-organizing skills. Their signs represent the number of black women and Latinas who are incarcerated in Texas, respectively. (Photo by John Anderson)

Travis County Commissioners Court formally adopted Tuesday a $287 million bond proposal for a long-delayed Civil and Family Court­house Complex to be placed on the November ballot. If voters approve, the new courthouse will be built at Fourth and Guadalupe, on what is currently a parking lot owned by the county.

Civil rights hero and icon Julian Bond, activist, leader, legislator, and historian, died Saturday, Aug. 15, after a brief illness. He was 75. In a statement, President Obama said, "Justice and equality was the mission that spanned his life."

Houston Sen. John Whitmire and Lt. Gov. Dan Patrick met at the Capitol Tuesday to announce the launch of a special inquiry into jail suicides. There have been 29 suicides in Texas county jails in the past fiscal year (ending Aug. 31) and three since Sandra Bland's death.

While that was happening, the Travis Co. Sheriff's Office distributed a press release concerning the death of an inmate at the county jail. Athena Covarrubias, 40, went to jail on Aug. 5 for possession of a controlled substance, possession of marijuana, and driving with an invalid license, all in Williamson County. According to TCSO, "preliminary findings show that there is no evidence of foul play," though the medical examiner will perform an autopsy this week.

Hood County has agreed to pay $43,872 to settle a lawsuit filed by Jim Cato and Joe Staple­ton, a gay couple denied a marriage license in June. County Clerk Katie Lang, backed by anti-LGBT, conservative Liberty Institute, refused to issue the license based on "religious convictions." Local attorneys Jan Soifer and Austin Kaplan, who represented the couple, will donate a portion of the recovered legal fees to the Equality Texas Founda­tion.