The coming weeks' schedules are jam-packed 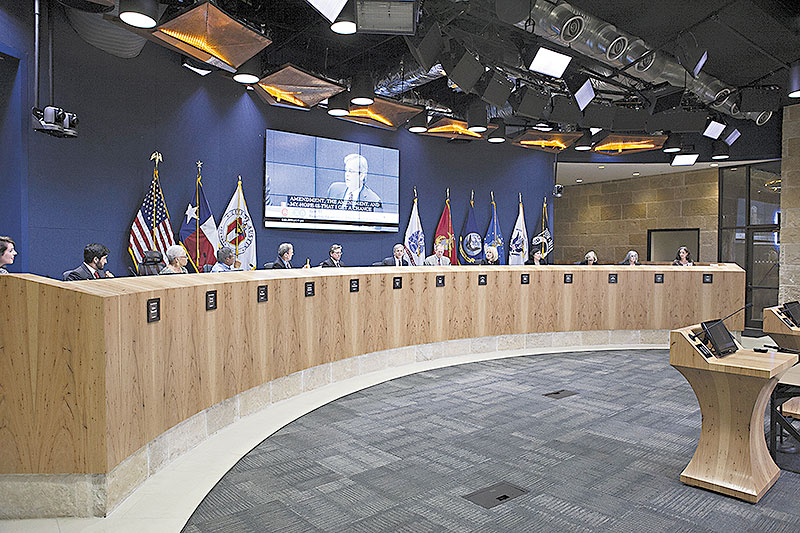 City Council is hitting budget crunch time, and the strain is showing. Leading up to today's regular meeting (Aug. 20) were three work sessions (budget Monday and Wednesday, regular meeting Tuesday), as well as committee meetings, including a marathon Planning and Neighborhoods session Monday night – dominated by public testimony on short-term rentals – that lasted until nearly 3am. (Like water, Council work seeks its own level, and pushing the heat to the committees means the late nights move there too.)

At Monday's work session, the whole group managed to work through three of the five scheduled departmental presentations – meaning two were bumped to Wednesday morning's session to join the five others already on tap. Public budget hearings are scheduled for Aug. 20 and Aug. 27 (that is, beginning at today's regular meeting), and it would be helpful for Council members to have heard all the presentations before the public weighs in.

Monday's session (beginning with Austin Water) began to derail when District 7 Council Member Leslie Pool raised the issue of Stage 2 water restrictions (one watering a week), arguing they should remain in force rather than "ping-ponging" back and forth in response to the May and June rains followed by July and August drought. The subject was not strictly germane to the budget review, but had been prompted by CM Don Zimmerman's proposal (posted on the Council message board, without yet a co-sponsor) to return to Stage 1 restrictions (two waterings a week) immediately.

Pool's remark prompted Zimmerman to respond – to the dismay of the temporary chair, Mayor Pro Tem Kathie Tovo (Mayor Steve Adler was in and out with other engagements), who feared wandering from budget prep into the policy woods. Zimmerman argued that residents have re-landscaped after the rains, and under the city's own rules, rising lake levels may allow the utility to ease the restrictions. Austin Water Director Greg Meszaros responded that both policy and experience suggest rain in Texas is very much an intermittent thing, and administrators are hoping to maintain and encourage residents' recently successful efforts to conserve.

It was only a brief detour, but it served to magnify Council's concerns about getting control of its schedule. In explaining the budget decision schedule, Interim City Attor­ney Anne Morgan told the group that following the public hearings, Council's state-law-defined day for budget adoption is Sept. 8. (Technically, City Manager Marc Ott added, Sept. 8, 9, and 10 are scheduled for budget adoption, although in most previous years the adoption is completed in one day.)

That news alarmed CM Ann Kitchen, who took it to mean that every individual proposed budget amendment – from soup to nuts, aardvarks to zebras – had to be raised and voted on in a single day. That's never been the case (the budget adoption votes normally ratify decisions made in the progress of budget review), but with an inexperienced Council and departmental presentations lagging, actual decisions on open questions have been few. Morgan promised to return with more precise information (and indeed by Tuesday's work session, the mayor reported that he'd conferred with Morgan and staff, and Council would indeed be able to make their budget amendments and meet their deadlines). But as Morgan described the schedule Monday, it indeed sounded like all actual budget decisions would be made on one day.

That mutual misunderstanding provoked Zimmerman to chime in and begin denouncing the entire budget process, insisting that departmental heads were simply lining up to "justify expenses," and the Council had little time or ability to intervene. "The whole process is completely backwards," Zimmerman said, "and I think we need to fix it before next year." He contemplated a budget process in which Council would take "months" reviewing every budget proposal before making decisions – not quite how the process is imagined in the City Charter, let alone practical under the city's administrative structure. Zimmerman's outburst – and its reflexively nasty edge – was of a piece with much of his treatment of staff throughout the year, and it evoked a rare, pointed response from Ott.

The city manager said he rejected the Council member's characterization of the budget process, that city staff members are simply doing their job of annually proposing a budget, and that Council has ample opportunity to make its own policy decisions. "We've done it professionally, we've given you the benefit of our best collective professional judgment about a fiscal plan for the next fiscal year ... and I reject your characterization of our motives in bringing a professional, fiscal document to the Council. I don't think it reflects our intent, our work, or the document – the recommendation that is before you. The process is what it is, there are some constraints associated with that timeline that are not reflected in your remarks. ... This isn't designed to minimize Council's opportunity to discuss, deliberate, and consider – as it is your job – this recommendation that is before you, for next year's fiscal plan. So I do not agree with your remarks."

Zimmerman didn't respond directly, but in due course his complaint was taken up again by CM Ellen Troxclair, after Acting Assistant City Manager Mark Washington began his presentation on Human Resources. Part of Washington's task was to explain management's reasoning in recommending a 3% across-the-board wage increase for civilian city employees – comparable market rates, maintaining competitiveness, addressing turnover, etc. – and Troxclair read it as a direct attack on the pending proposal (sponsored by Zimmer­man) to instead cut-and-tier that wage. She accused Washington of exceeding his charge, and of "presenting no alternatives" to management's wage proposal. Wash­ing­ton didn't retreat – he suggested that Council can certainly determine final policy, but the budget proposal is management's considered recommendation, for Council to amend or confirm.

The immediate effect of the string of debates was to run out the clock. As members began to leave for various other obligations, they decided to speed-date all seven remaining departmental presentations (including Austin Energy) at Wednesday's morning session, with a hard allocation of 20 minutes per department. And today's meeting, depending on public turnout for the budget hearings, looks to be at least as crowded.

In addition to kicking off those hearings, they'll be making at least preliminary recommendations on short-term rentals (see "Late-Night STR Debate" and "Public Notice: Paralysis by Committee," Aug. 21); hearing an appeal by Spring­dale Farm concerning its application for a conditional use permit (rejected by the Planning Commission) – although they may limit oft-heard public testimony; and presumably moving forward on allowing a developer to use a piece of city-owned land on Rainey Street as a construction staging area, in return for certain concessions (recommended by the board of the Mexican American Cultural Center). Any one of those things could evoke another marathon – let's hope the folks on the Planning and Neighborhoods Committee caught some ZZZs before this morning.