Austin's newest trail system will make its debut Friday, Aug. 14, with the official opening of the first six miles of the Violet Crown Trail. When completed, the trail will extend 30 miles from Zilker Park into Hays County, passing through greenbelts, urban areas, and city-owned water quality protection lands. Spearheaded by the Hill Country Conservancy, which preserves open space by forging land preservation agreements, the project has been in the making since voters approved the first purchase of water quality protection lands in 1998.

In some ways the grand opening is symbolic: The trail's first five miles, from near Barton Springs Pool south to Gaines Creek, comprise the existing Barton Creek Green­belt trail. The HCC has reconstructed some damaged areas and added mile markers with maps and wayfinding signposts, paid for by the Austin Parks Foundation, to orient trail users. They've shared the signposts' GPS coordinates with the city to help emergency crews pinpoint a caller's location. And in partnership with mountain biking club Austin Ridge Riders, the HCC has assumed responsibility for the maintenance and cleaning of that section of the greenbelt.

One new mile of trail, connecting the Barton Creek Greenbelt trail to the new Violet Crown trailhead at Hwy. 290 and Brodie Lane, runs along Gaines Creek, south of Bar­ton Creek. The new trail, like the greenbelt, is a natural dirt surface and open to hikers, runners, mountain bikers, and leashed dogs. The labor on both sections has been done primarily by youth in the Texas Con­ser­va­tion Corps, an AmeriCorps service program of local nonprofit American YouthWorks.

Because the trail will eventually pass through environmentally sensitive water quality protection lands, where caves and karst features connect to the Edwards Aquifer, and where the endangered golden-cheeked warbler nests, the city commissioned the Lady Bird Johnson Wildflower Center to assess the trail's proposed route and identify potential problems. That process has informed the planning particularly for later sections of the trail. The conservancy's goal is to complete the next seven miles, connecting the trailhead to the Veloway, by the end of 2016.

The HCC got into the trail business to get a new generation invested in preserving Hill Country land, says Executive Director George Cofer. "The more people we can get onto the lands, who will come to understand how beautiful and how sensitive from an environmental standpoint they are – that's good for recreational reasons, health reasons, and educational reasons." 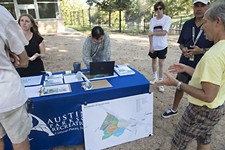 How Much of Zilker Park Can Austin Return to Nature?
Balancing ecological preservation and the human element in city's Zilker Park Vision Plan