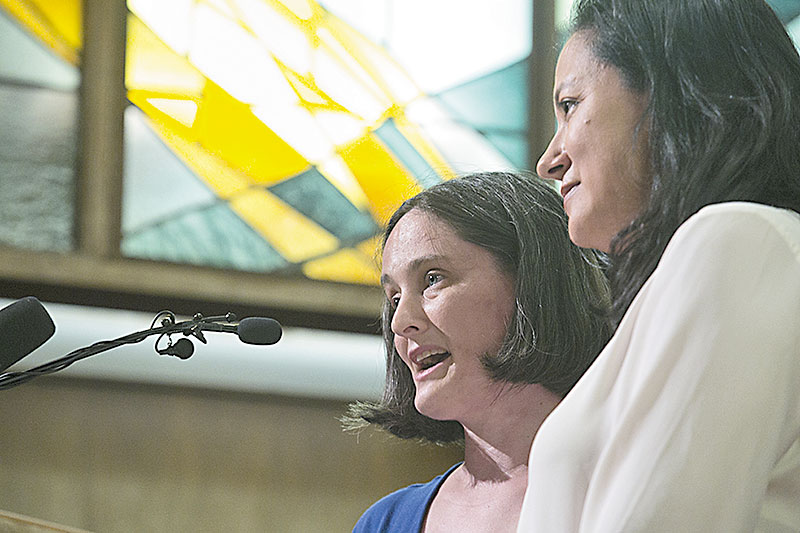 When Nicole Dimetman and Cleopatra De Leon welcomed their baby girl in March, only Dimetman's name was allowed to appear on the birth certificate. When De Leon gave birth to their son three years ago, it was Dimetman who was excluded. Even after June's historic U.S. Supreme Court ruling affirming same-sex couples the right to marry, LGBTQ couples continue to face injustice in the realm of family law – and beyond. However, recent court action may soon change that.

"As a couple, you are just so happy and excited that you've brought this new life into the world and then it's incredibly hurtful when you realize you can't be part of the first declaration of being that child's parent," Dimetman told the Chronicle.

As it stands, birth certificate forms in Texas only have two spaces for parents' names – one for a mother and one for a father – one member of a same-sex couple must formally adopt the child to be considered a parent in the eyes of the state. This adoption process is rife with anti-gay bias – in 1997, the Texas Legislature amended the law to ensure that supplemental birth certificates issued to adoptive parents also only have gender-specific categories. The discrepancy can create problems when it comes to insurance, health care, and school enrollment.

Dimetman and De Leon, who married in Boston in 2009, say they were left in limbo for months before securing an adoption. That anxiety-riddled time meant only one mother could legally make vital decisions for and offer protection to their child, leaving the family vulnerable. If the legal parent becomes incapacitated or dies, the remaining spouse's hands are tied. "It's pretty depressing to think that in addition to either losing your partner or your child there is nothing you can legally do to help either one," said De Leon. The problem, in part, led the couple to file suit (De Leon v. Perry) against the state's constitutional ban on same-sex marriage. In 2014, federal Judge Orlando Garcia invalidated the ban but placed a stay on the ruling pending appeal; after Obergefell v. Hodges, the 5th Circuit affirmed Orlando's ruling.

The consistent word from the Department of State Health Services on the issue of birth certificates post-Obergefell has been, "We'll get to it – eventually." In a July 30 message to the Chronicle, DSHS spokesperson Carrie Williams said the agency is in the process of reviewing the Supreme Court decision, working on the study with the Attorney General's Office and expects a full review in the coming weeks. "Once we complete that analysis, we would make any necessary changes as soon as possible," said Williams.

But last week, the tide turned for same-sex couples. A lawsuit filed on Aug. 5 by Neel Lane, the same attorney who represented De Leon previously, sought to compel (recently indicted) Attorney General Ken Paxton and DSHS to change the death certificate of James Stone-Hoskins, as requested by his husband, John, who is suffering from terminal cancer and is estimated to have only 45-60 days to live. Judge Garcia granted the plaintiffs an emergency motion to intervene in the De Leon case and ordered Paxton and DSHS interim Commissioner Kirk Cole to appear before the court on Wednesday, Aug. 12, to determine whether they should be held in contempt for not following the 5th Circuit's ruling.

To ensure birth certificates are also considered, Lambda Legal's Ken Upton and local attorney Ian Pittman, representing married Austin couple Robin and Leigh Jorgeson, sent a letter to Garcia on Aug. 7 offering Leigh (also Pittman's law partner) to testify before the court. Robin gave birth to the couple's second son on Aug. 4. They've faced an ongoing dispute with DSHS to obtain accurate birth certificates for both children. DSHS denied Leigh's application to be listed as one of the newborn's legal parents, despite the fact that he was conceived using her genetic material. "Right now, I have no rights with respect to my son," Leigh told the Chronicle. "I can't make medical appointments, I couldn't enroll him into daycare, and if my wife passes away he would not necessarily be placed with me. It's a really scary place to be."

Yet Paxton refused to show up to the Wednesday hearing, claiming it would be a waste of his time: "High-ranking officials such as myself have greater duties and time constraints than other witnesses," wrote Paxton. However, despite the grandstanding, the state seemed to cave, telling Garcia they would allow an amended death certificate for Stone-Hoskins and are now "working diligently" to finalize policies for both birth and death certificates, which could come as early as this week. (Garcia then rescheduled the hearing for Sept. 10.)

Advocates are cautiously optimistic, especially considering the state's sustained opposition to issuing same-sex marriage certificates, led by Gov. Greg Abbott and Paxton, who drafted a nonbinding legal opinion encouraging county clerks to refuse granting the licenses. His mostly hollow ramblings did little to stop the majority of Texas county clerks, who have complied with the high court order. If the state's guidelines for birth and death certificates aren't adequate, said Pittman, an additional lawsuit may be on the horizon. "I don't know how far Texas will go in drafting these guidelines," said Pittman. "We should not have had to reach the point where we force their hand. So, until we see them accurately reflect the legal realities, we are not going to hold our breath."

For those waiting to secure their families, every day the state drags its feet is another day of feeling powerless. Suzanne Bryant not only specializes in legal adoption for same-sex couples as a family law attorney, but has lived it. She and her partner, Sarah Goodfriend, whose February marriage in Travis County marked the first and only same-sex Texas marriage before the Ober­ge­fell ruling, each adopted one of their two daughters. After recently filling out a stack of paperwork to enroll her daughter in an AISD high school, Bryant realized she wasn't listed on her birth certificate, rendering the information void, a reminder of the remaining inequity. Luckily, the school accepted the adoption order, but someone in a less gay-friendly city or county might run into problems, like picking up their own child from school. "One thing to think about is the bureaucratic embarrassment to a child when a birth certificate isn't accurate – it's not just troublesome for parents but it's shaming for the child," said Bryant.

As a lawyer, Bryant worries the ruling delivered the false impression the birth certificate issue was settled. "It scares me to death that I hear people saying 'Oh, now that we can get married, we don't need to do an adoption,' which is so, 100 percent not true," she said.

Chuck Smith, executive director of Equality Texas, says the organization was fielding calls a week after the Obergefell decision from disappointed women who had given birth at hospitals that were refusing to put their spouses' names on birth certificates. "Legally married couples deserve to have their families recognized, and the state has an immediate duty to provide them with accurate birth certificates for their children," said Smith.

And that's just one of several issues, he reminds. "There is still much to be done to have full equality beyond marriage," he said. "The simple reality is that a same-sex couple could be legally married in the morning but return to work and get fired from their job; go home and find themselves evicted from their apartment; get refused service at a restaurant or kicked out of a cab for no other reason than their sexual orientation."

He continued, "It is great that we have secured the freedom to marry in Texas, but it is nowhere near the end of being able to say that same-sex couples can live their lives without being discriminated against because of who they are." 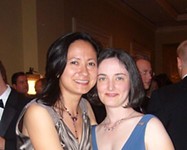