The Drag gets the Brooklyn treatment

We all know the story: "Austin was cool, then it sold out." Urban Outfitters' upcoming retail outlet, Space 24 Twenty, will be a step in one direction or another.

Positioned between 24th and 25th streets on the Drag, the Space will contain two restaurants, a selection of food trucks, an artists' market, a semi-public courtyard, and a stage for live music, pending a special events license. In addition, of course, to an expanded Urban Outfitters store with a bar.

Promotional materials market the new complex – construction of which is set to be completed in October – as an artistic community hub. "It's more than a retail, it's a fun space for people to meet and hang out," says Rachel Albright, Urban Outfitters' marketing director. "We want to get the local students and artists involved."

"This is going to be a big transformation for the block, but the Drag is constantly undergoing change," says District 9 Council Member Kathie Tovo. "I hope that they will get some truly independent and local restaurants to take up leases."

Five thousand of the Space's 15,000 square feet are to be reserved for local businesses. Additionally, the complex will host two new restaurant concepts: Pizzeria Vetri, an artisan pizza shop at the site of the former Mellow Mushroom, and a yet-unnamed burger joint from Michael Symon, the popular Food Network chef who describes his culinary style as "meat-centric."

Space 24 Twenty marks the third outlet of this kind from Urban Outfitters, following locations in Brooklyn and Los Angeles (if that says anything about Austin's emerging brand). "The Drag needs some help, a little revitalization," says Albright. "It's pretty run-down. And I understand it used to be the most amazing place to hang out. It'll be nice for it to be inviting again."

There was some grief over the several local businesses that had their leases bought out to make room for the expansion, including Manju's, the women's clothing store that had been a staple of the Drag since 1977 (see "Urban Outfitters Annexes Block of the Drag," June 17).

"They use 'community' in a very thin sense of the word. Community is created by people, not by retail," says UT professor Robert Jen­sen. "And to go hang out at this place is gonna be out of reach for many students."

On the other hand: "This is just what the Drag needed to clean up its image," says student Noelle Barthey. "I can't wait to drink martinis in the courtyard between classes." It's Do or DIY
Whether quiet protest or paradigm shift, the handmade crowd has plenty to say 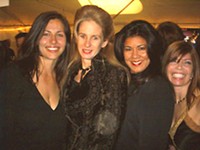 After a Fashion
Austin's friendly neighborhood (not to mention cuddly) Style Avatar, Stephen Moser makes the scene as the scenesters take over Austin! Be sure to catch AAF in each of our SXSW dailies!