Police accountability activist Antonio Buehler was arrested for interfering with public duties and resisting arrest early Sunday morning while filming police activity Downtown on Sixth Street. He was booked into the Travis County Jail shortly after 3am Sunday and remained there until after 7pm, when the Chronicle spoke with his attorney, Millie Thompson, who said she was on her way Downtown to bail him out. According to Thompson, APD was in no rush to file a probable cause affidavit (officers have 48 hours after making an arrest to file the affidavit), and were instead willing to let Buehler spend Sunday in jail.

Not surprisingly, the stories being told by APD and the Peaceful Streets Project, the cop-watch organization Buehler co-founded, are quite different. An affidavit issued by APD Officer Al Joe Garibay details a series of events in which Buehler and his cohorts obstructed police reaction to a "disturbance" and repeatedly went out of their way to interfere with officer activity. However, video (PSP produced six different YouTube videos detailing events leading up to and through Buehler's arrest) indicates that the 38-year-old didn't move much at all, and that both parties may have gone into the interaction with a certain degree of prejudice.

Thompson wrote in an email Sunday morning that the arrest was "retaliation" against Buehler, who since his well-documented NYE arrest in 2012 has been a vocal nemesis of APD and its officers. He was arrested three times that year – either for interfering with public duties or disobeying a lawful order – though each case has either been dismissed or decided in Buehler's favor.

A version of this article appeared in print on August 7, 2015 with the headline: Stop the Presses: Buehler Arrested

Buehler's Case Dismissed
One charge down; more cases to come 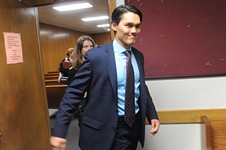