AISD Board Pays Tribute to Schneider 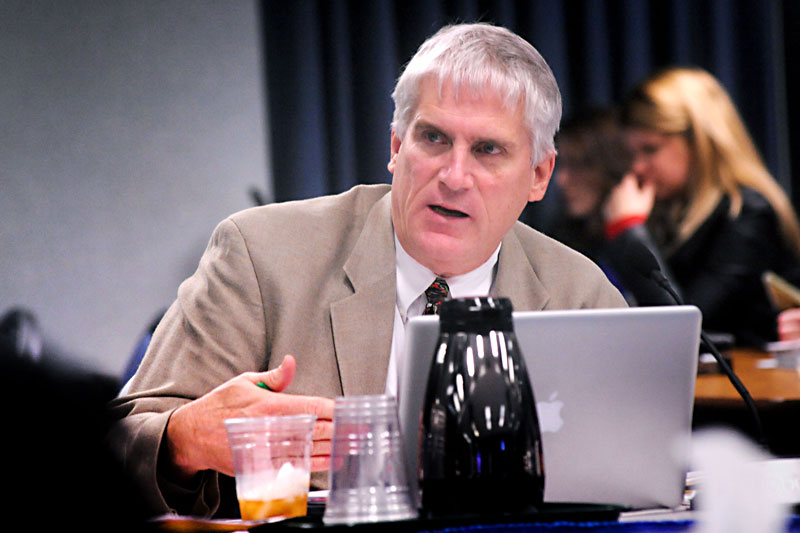 Austin Independent School District trustees delivered a sad farewell to one of their own on Monday night, and began the difficult process of replacing him, as the board held its first meeting since the death of District 7 Trustee Robert Schneider.

The first item on the evening's agenda was a resolution honoring the 13-year veteran of the board, who died on July 28 at the age of 62. Wearing a badge that said "Trustee Schneider Proud," Board President Gina Hinojosa led the tributes to "the longest-serving of our team of 10."

With Schneider's widow Kathleen, their children, and former board members Cheryl Bradley and Lori Moya in attendance, the six trustees present took turns remembering their lost colleague and friend. A tearful Amber Elenz thanked his family for sharing his time with the board, as Julie Cowan recalled his pivotal grasp of the operations and power players under the Capitol dome. Paul Saldaña recounted his humor and his love of Whataburger, while Ann Teich recalled regularly talking policy with Schneider over a burger. She noted that when she first joined the board, "Robert was one of the first trustees to come up to me and offer his support."

It was no secret that Schneider's health had been declining in the months before his death, but he kept up his commitments to the district right to the end. Board Secretary Jayme Mathias, who had been mentored by Schneider when he first joined the board, called him "omnipresent." Mathias said, "He was here for every meeting. It was such a beautiful thing to see his commitment to the district."

Superintendent Paul Cruz presented a tribute on behalf of staff, and noted that "Mr. Schneider," as he always called him, was the district's data maven, often probing far deeper into the numbers than was comfortable for the administration. However, Cruz said, "if he had different data, I'd always go with him."

The memorial resolution passed unanimously, but this was just the first half of the discussion, as trustees moved on to the complex issue of selecting Scheider's successor. While Hinojosa said that it "does not feel right" to discuss the issue so soon after Schneider's passing, the board had been informed by the Travis County Elections Division that it was on a tight timeline.

Trustees have two options. First, appoint a replacement within the next 180 days, who would then hold the seat until the next scheduled board election in November 2016. Second, hold a special election in November of this year: If they take that option, they must announce it by Aug. 11 to get a space on the ballot.

Hinojosa clarified that the district cannot simply appoint a successor to fill the remaining three years of Schneider's unexpired term, which runs through to Nov. 2018. However, while there was consensus that a decision has to be made quickly so that District 7 will have representation, there is still division over whether to elect or appoint. Both Hinojosa and Teich said they had been contacted by City Council Member Ellen Troxclair, whose seat covers most of Schneider's district, saying there was support for a quick election. Saldaña said he was undecided on the issue, but wanted more clarification of costs of a special election, since the board had heard numbers ranging from $80,000 to $600,000. His concerns were echoed by Mathias, who suggested that notorious budget hawk Schneider would be extremely cautious about spending multiple teacher salaries.

On top of this was the issue of voter turnout. Both Hinojosa and Mathias expressed concerns that voter participation in an off-year election, as opposed to a presidential year, could allow a small pressure group to decide the fate of the seat. Teich countered that, if the board simply appointed an incumbent, it would be an even smaller group making that decision. With no consensus, the board has scheduled further discussion for their next meeting on Aug. 10.

School's Out, but AISD Pay Raise Talk Goes On
Debate over salary increase details carries on at AISD