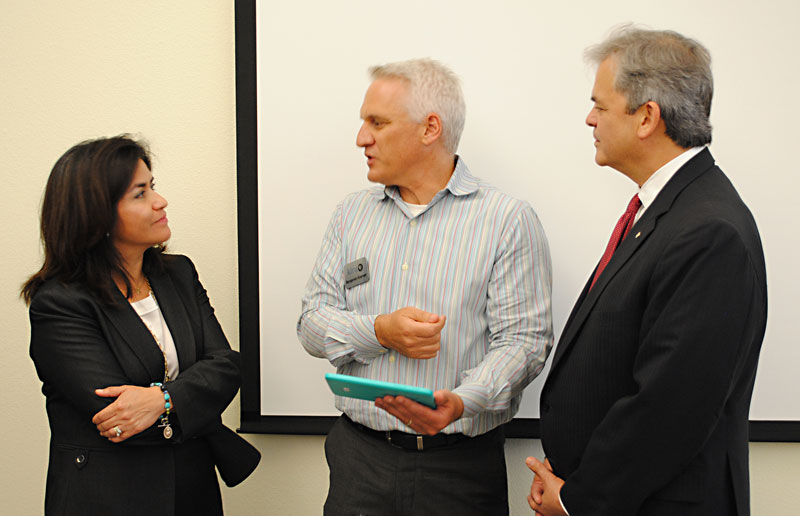 Earlier this month, President Barack Obama and the U.S. Department of Housing and Urban Development announced a new pilot program meant to close the gap between those online and those left out when it comes to Internet access, largely due to expense. The plan, called ConnectHome, attempts to deliver high-speed, affordable broadband to low-income public housing residents. Supported by corporations, nonprofits, and local governments, the initiative is slated to launch in 28 communities across the nation and reach 200,000 households. "Just because you don't have money in your household to buy fancy technology, that should not be an obstacle," said Obama, who called the Internet a "necessity," not a luxury.

High-tech Austin didn't make the list of participating cities – but not because it isn't qualified. In fact, Austin is ahead of the curve, earning it a spot as a peer mentor to other cities in the national program, HUD Principal Deputy Assistant Sec­re­ta­ry Lourdes Castro Ramirez announced Tuesday. "Togeth­er with Austin's Unlocking the Con­­nec­tion and other partnerships across the country, through ConnectHome and the city of Austin's leadership, we can work together to bridge the digital divide for all Americans," she said at an event at the Hen­ry Flores Education and Training Center at the Housing Authority of the City of Aus­tin's Meadowbrook Apartments.

In November, HACA, Google Fiber, and around two dozen national and local groups teamed up to provide free Internet access, hardware, and digital literacy training for HACA residents (see "Connecting a Whole Community," Jan. 23). The goal of "Unlocking the Connection" is to give 4,300 public housing dwellers living in the 18 HACA developments across the city a shot at the online resources – including education, bill payment, health care, and job searches – many of us take for granted. The trailblazing effort is seen as the model for HUD's new initiative.

"We'll provide guidance around issues like data plans and refurbished computers, but also how to convince people that say they don't see the use in the Internet that it can actually be very helpful for them," Catherine Crago, strategic initiatives manager for Austin Pathways, a HACA nonprofit dedicated to promoting education for subsidized housing residents, tells the Chronicle.

But is the ambitious program actually working?

Crago says roughly 80% of the residents at five HACA properties have already registered for free basic Google Fiber service. For now, the high-speed access is available at Man­cha­ca Village, while Meadowbrook and Shadowbend apartments are getting set up for basic broadband service. The program expects to connect all HACA properties within the next two years. And more importantly, to many digital inclusion advocates, nearly 70 residents have completed computer classes provided by longtime nonprofit Austin Free-Net, earning them each a free refurbished computer donated by Austin Community College, and 30 more are set to graduate from the program in August. The classes – funded through foundation donors – range from digital literacy basics to social media, coding, and workforce training lessons. "It's been incredible to see moms gain access to the AISD web portal to set up appointments with teachers and to view their kids' grades. And to see students be able to get help with their homework online," said Crago.

Even with the progress, local leaders understand that bridging the digital divide among housing residents is far from complete. HACA President and CEO Michael Gerber said the mentorship role could also be a two-way street, allowing Austin to collect new ideas to improve their own program. "What we find is that human connection is really the change agent for technology adoption," said Gerber. "No one has a lock on how to do digital inclusion. We're working to leverage as many partnerships as we can to truly bring opportunity home to our residents."