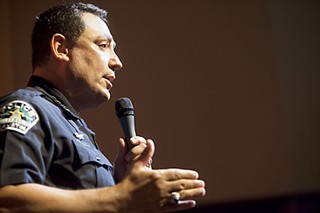 Austin Police Department Officer Blayne Williams is currently out of a job after receiving an indefinite suspension memo on Monday. It was the second such letter Williams, an eight-year veteran, has received in the past two years.

Monday's memo notes that Williams was terminated for mishandling a domestic disturbance call in late January between a mother and her daughter in East Austin. Williams reportedly jumbled a series of pertinent testimonial specifics in his relaying of information to three others – Corporal Earl W. Garrison, Sgt. Robin Orten, and Detective Mark Ferris – indicating instead that the dispute was a "mutual combat situation." Those supervisors, however, conducted their own investigations and determined that there was a primary aggressor in the disturbance – testimony corroborated by both witnesses and Williams' dash-cam video – and ordered Williams to make an arrest. Garrison, Orton, and Ferris each reported Williams as having "neglected to convey pertinent and/or material information in their different conversations with them," according to the memo, and indicated that his omissions "nearly resulted in the non-arrest of [the daughter] for Family Violence and Interference with an Emergency Call."

Police Chief Art Acevedo docked him for Neglect of Duty and Dishonesty. He said that Williams "intentionally misrepresented the facts and misled others" when he told Garrison and Orton that the mother in the altercation changed her statement. Acevedo notes that Williams' dash-cam supports the consistency of the mother's statements. "Even if I was to believe that Officer Williams did not intentionally misrepresent or mislead his supervisors ... I am left with the conclusion that he either is unwilling, unable, or not competent to follow Department policy and take appropriate action upon the commission of a crime."

Monday's memo marks the third significant disciplinary measure Acevedo has taken on Williams since 2011. That summer, he was suspended for 90 days for pushing an elderly store employee at a North Austin H-E-B grocery store. He was placed on probation until Dec. 2013. Two months before completing his probation, he was fired for failing to report and collect as evidence (as well as lying about) a cell phone hidden behind a ceiling tile at the Hyatt Regency Hotel on Barton Springs Road, where Williams was working a second job. (In October, an independent arbitrator overruled the termination and reduced the suspension to 15 days after deciding that Williams was not guilty of Dishonesty.)

The termination notice was the start of an enduring standoff between Williams and Acevedo. The officer has sued the city twice; once, in July 2014, claiming that the chief retaliated against his filing of a discrimination complaint alleging Acevedo's racial favoritism and, most recently, in March, when Williams alleged that he was passed over for a series of promotions because of his complaints. Speaking on Tuesday, his attorney, Greg Cagle, noted the pattern of behavior on behalf of the department. "When they're trying to indefinitely suspend someone, they take a policy violation allegation and turn that into untruthfulness," he said. "There's a pattern there. Every case with an untruthfulness [allegation] is one that they create during the course of the investigation. That's how they justify the indefinite suspension.

"If you look at the whole file, you'll see that Williams was out there trying to work the case. He's out there for over an hour. I see cops get in trouble for going out and not working. [Williams] goes out of his way to try to do the right thing on the call."

Acevedo, however, noted in his memo that he has lost faith with the officer's "pattern of behavior" and inability to learn from his mistakes. "Even setting aside the dishonesty allegation, the acts of Jan. 23, 2015, when combined with Williams' sustained disciplinary history, warrant indefinite suspension. Based upon his history, if Williams is retained, his chain of command and I are unanimous in the belief that he will continue to commit acts of misconduct resulting in further disciplinary action."

Cagle told the Chronicle that Williams will appeal the indefinite suspension.