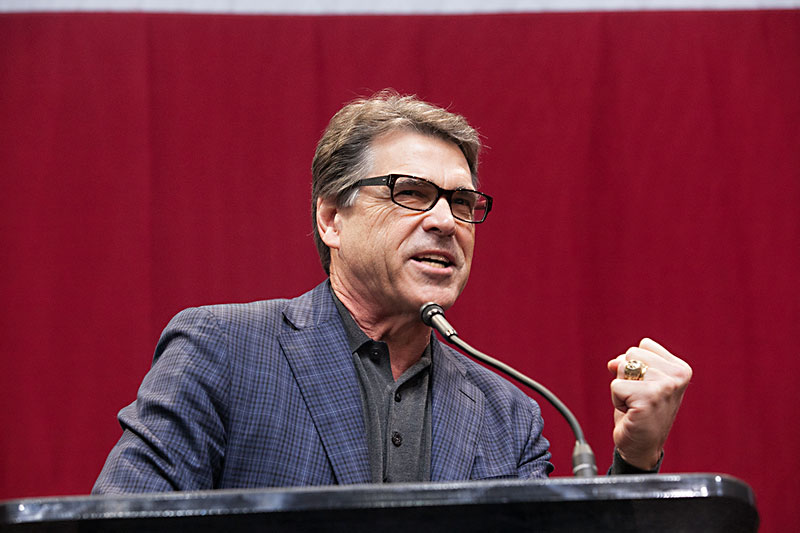 Ready for Republican presidential hopefuls in your home? The first of nine televised GOP presidential debates is scheduled for Aug. 6, in Cleveland, Ohio. Yet with more announced candidates than can fit in the studio, should any of the three Texans in the race bother booking a flight?

Only the top 10 candidates in an average of five national polls will be invited to attend the debate. With 16 names in contention, and most of them only polling in single digits, a good week could place a candidate in the lead, just as one slip could throw them straight down into the also-rans. Take Donald Trump: A month ago he was a punch line. Now a series of comments about Mexican immigrants being "murderers [and] rapists" has played to portions of the GOP base, and in some polls, he's doing better than more established candidates with actual political records.

Like, for example, former Texas Governor Rick Perry. In the latest YouGov poll for The Economist, Trump now leads the pack, with 15% of Republicans surveyed placing him as their first choice for president. The only good news for Perry, who lags in margin-of-error territory at 3%, is that Trump singled him out as a governor responsible for a porous border. That accusation, plus Perry's rebuttal that his old friend Trump simply didn't know what he was talking about, gave the former governor his first national headlines in weeks.

But headlines fade, and the long haul will come down to finances. With campaigns giddily announcing their fundraising totals for the first half of the year, Perry's only pulled in $1.1 million. To boost the coffers, affiliated super PACs have pulled in an additional $16.8 million. Yet while most politicians boast about how many small donors have reached into their pockets, that could be tough for Perry. Three donors were responsible for 89% of that super PAC haul: oil pipeline tycoon Kelcy Warren ($6 million), tech billionaire Darwin Deason ($5 million), and a so-far unnamed third party ($4 million).

That largesse still puts Perry at a severe cash disadvantage to Sen. Ted Cruz, the second Texan running for the presidential nomination. While his polling numbers are still dire (4% to Perry's 3%), his supporters have been far more generous. His campaign issued an excited statement on July 7 that he had $14 million in his war chest, plus another $37 million split between three super PACs. Those numbers were a little tarnished by three June letters from the Federal Election Commission, dinging him and his donors for technical violations and sloppy bookkeeping.

However, he may have to reconsider how he spends some of those stacks, after a bizarre spat with The New York Times – not the editorial board, but the books section. Politico.com reported that Cruz's autobiography A Time for Truth had been excluded from the NYT bestseller list over allegations of strategic bulk purchasing. That's when a political campaign or pressure group pays for large stacks of a book to inflate sales numbers, knowing the prestige of being able to put "New York Times Bestseller" on the cover. It's become an unpleasant but accepted part of the political landscape, but the Times editors have seemingly put their foot down with Cruz. So far, Amazon.com, publisher Harper-Collins, and Cruz's campaign have denied any such inflated sales, and now the candidate can yet again rail against East Coast liberals trying to deny the existence of his Republican crusade.

The priority now for both Cruz and Perry is to make sure that they're on the guest list for that Aug. 6 debate, and so far both seem pretty likely to make the cut. However, it's a tougher road for the third Texan on the primary ballot. Austin-born Carly Fiorina is positioning herself as the GOP's best alternative to presumptive Democratic nominee Hillary Clinton. However, her pro-business, anti-regulation message has done little to distinguish her from the rest of the pro-business, anti-regulation GOP pack. And while she is tied with Perry at 3% in the YouGov numbers, on aggregate he is a nose ahead of her. Meanwhile, neither her long career as a tech exec with firms like AT&T, nor her behind-the-scenes experience with conservative groups like the American Conservative Union Foundation, nor even her time as Republican National Com­mit­tee fundraising chair, have opened the donation floodgates. So far, her campaign has announced just $1.4 million in contributions, plus another $3.5 million held by the Carly for America super PAC.

Ultimately, all three are scrabbling in the middle of the pack. By contrast, while Jeb Bush polled behind Trump in the YouGov poll at 11%, everyone expects the Donald's support to wane, making way for the Florida governor to come out in front. His $114 million war chest ($11 million from his campaign, $103 million in his super PACs), combined with consistent first- or second-place positions in just about every poll this year, still make him the candidate to beat.