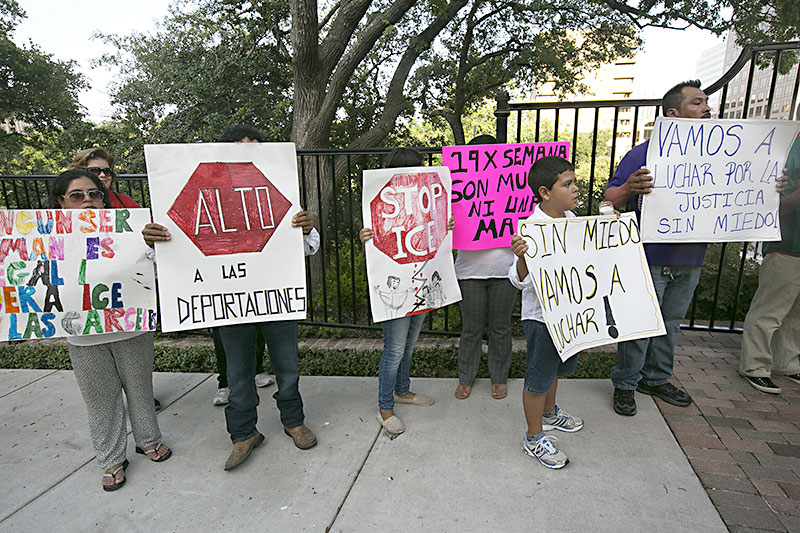 Protesters line up outside the Governor's Mansion July 9 for a vigil led by the Austin Immigrant Rights Coalition, in support of Deferred Action for Childhood Arrivals (DACA) and Deferred Action for Parents of Americans and Lawful Permanent Residents (DAPA). Part of a statewide effort, the rally was intended to pressure GOP opponents, including Gov. Greg Abbott, into accepting immigration reform. (Photo by Jana Birchum)

Nearly one year after rolling into Austin, Uber announced that it will begin offering service in San Marcos. No word yet on whether or not Lyft intends to join the party. San Marcos' city council approved a resolution in April to allow transportation network companies.

Jefferson Davis down? A final public meeting on what to do with controversial statues of Confederate leaders on the UT campus was held July 15. The UT Briscoe Center for American History has offered to take them if UT President Greg Fenves decides they should be removed.

Capital Metro finances look healthy, according to a draft budget given to its board July 14. Early figures show $279.3 million in operating revenue next financial year vs. operating costs of $244.9 million, and a fund balance of $143 million, much of which will go to new and expanded services.

The city manager's much-anticipated response to the Zucker Report on the city's Devel­opment Services and Planning and Zoning departments was released last week. Interested parties are avidly digesting the 204-page report.

Tin foil hats on! Jade Helm 15, the U.S. military training exercise covering multiple states, including Texas, has begun. Conspiracy theorists accuse the operation of being everything from a secret federal takeover to the reason Blue Bell ice cream went off the shelves.

Sen. Ted Cruz is in hot water over his autobiography, A Time for Truth. Not only has The New York Times refused to include it in their bestseller list over claims of bulk-buying scams (see "Texas-Tied GOP Candidates Race for Debate Spot," July 17), but Senate Majority Leader Mitch McConnell's office has called sections "pure fantasy."

The 5th Circuit Court of Appeals ruled last week that, despite the intense heat, Louisiana's death row prison house does not need to be air conditioned. However, the ruling stated that extreme temperatures in the cells may violate the Eighth Amendment. This could influence conditions in Texas, where inmates – and sometimes prison guards – have complained about intense overheating during the summer months.

President Obama commuted the prison sentences of 46 drug offenders on Monday, explaining via video that the individuals were not "hardened criminals" and that their punishments were too severe considering their crimes; 13 of those granted relief had been sentenced to life in prison.

Obama continued calls for reform to the criminal justice system Tuesday at the NAACP national convention, advocating against mass incarceration. He announced a federal review of the use of solitary confinement, pressed for shorter sentences for nonviolent criminals, and asked Cong­ress to pass a sentencing reform bill by year's end.