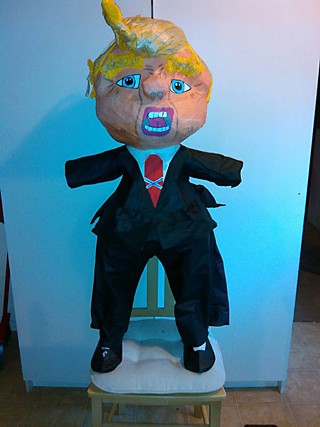 Those of you in search of a locally made Trump-bashing option are in luck: Jumpolin owners Sergio and Monica Lejarazu, who know about unscrupulous real estate developers, sent in this photo of their version of the popular piñata subject. Orders can be placed by visiting Jumpolin's Facebook page or calling 512/424-9511. (by Monica Lejarazu via Facebook)

"Wow!" exclaimed a beaming Donald Trump as he stepped onstage, basking in the cheers of a throng attending his launch into the 2016 presidential race. "That is some group of people," he gushed. "Thousands."

It was a showbiz extravaganza. Literally. The crowd was cheering the self-promoting hypester who wants to be president – but not necessarily supporting him. That's because some of these over-the-top enthusiasts were actors! Yes, hired at $50 a pop to do a three-hour gig as Donnie's "crowd." Extra Mile Casting had been retained to puff up the audience: "We are looking to cast people for the event to wear t-shirts and carry signs and help cheer him," said Extra Mile in an email to its list of actors who work as extras in films, TV shows, etc. When the Donald Show was over, the extras dumped their signs in the trash and went to their next acting gigs.

For his part, Trump delivered a rambling, almost-incoherent 40-minute rant. Citing his chief qualification for the highest office in our land, he said: "I'm really rich. ... And by the way, ... I'm not even saying that ... to brag .... That's the kind of thinking you need for this country." And his immigration policy is simply ... well, simplistic: "I would build a great wall. And nobody builds walls better than me, believe me." Wow, apparently he intends to build the wall himself! Then he added a jingoistic gringoism to this Good Neighbor policy, declaring: "And I'll have Mexico pay for that wall." And what's his economic policy, you ask? It's a whopper: "I will be the greatest jobs president God ever created," he bellowed.

No, no, Donnie – don't even try to blame God for creating you or your nuttiness. You truly are a self-made man, spawned from the fumes of your own gaseous ego. Yet, you're a godsend for those of us seeking comic relief in politics.