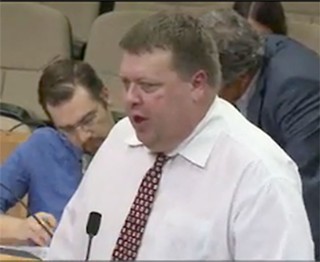 City Council and its committees are on hiatus throughout this month of July, but not so all of their citizen counterparts, the 73 city boards and commissions which advise Council on everything from African American Resources to Zoning and Plat­ting. Especially Zoning and Platting, in fact: With its June 16 meeting canceled due to weather – and with several brand-new commissioners just seated – ZAP had 38 public hearings on its agenda this Tuesday, July 7, each with backup materials, ranging up to 258 pages of documents on the controversial Austin Oaks PUD proposal to build a regional center at MoPac and Spicewood Springs. On that one, even after a year of negotiations, said Jerry Rusthoven of the city Planning and Development Review Department, staff has yet to see a proposal they could recommend, but they're also unwilling to say they would never get to that point: "We continue to go back and forth on issues such as traffic, density, environmental – none of them have reached a hard landing point yet." Still, said Rust­hoven, PDRD wants another three months to try to work things out with the Dallas-based developers. Opponents, including six adjacent neighborhood associations, were asking for a decision now (which would clearly have to have been a rejection), and a number of commissioners appeared to agree. In the end, though, they voted to postpone the case to Sept. 15, with all sides agreed that this would be the final delay.

Some of ZAP commissioners were just getting acclimated in their first meeting; they're among some 391 appointees – new and returning – to the city's boards and commissions, whose terms began July 1. See the full list at www.austintexas.gov/department/boards-and-commissions. And if you're itching to serve, it's not too late; that same page also lists some 238 more B&C vacancies the city's still trying to fill, along with a vacancy on the three-member Civil Service Com­mis­sion overseeing employment issues regarding firefighters, police officers, and EMS personnel. Deadline to apply for that one is Aug. 8.

Talk about affordability. What does it mean to you? What does it mean to your neighbors, or the family across town? It's time we talk about these issues, with total strangers, repeatedly, in scattered public settings around town. Conversation Corps is a partnership between Capital Metro, AISD, and the city of Austin, inciting public conversations on various topics, with the ultimate aim to "inform decisions and guide collaborative partnerships." This month's topic is household affordability, and the discussion begins Monday, July 13, 11am at Strange Brew, 5326 Manchaca Rd., and at noon in Spanish at the YWCA at 2015 S. I-35. See www.atxtalks.org for the full schedule.

NavigateLifeTexas.org is a new website providing comprehensive information for families who have children with disabilities and special health care needs. It's presented by the Interagency Task Force for Children With Special Needs, and the Texas Health and Human Services Commission.

A GoFundMe page has been established for beloved Yellow Cab Austin driver Conrado "Conrad" Guadalupe Contreras, a victim of senseless violence, gunned down at the Omni Austin Hotel in the early morning hours of Sunday, July 5. The fund is intended to help Mr. Contreras' family pay for funeral arrangements and other related expenses: www.gofundme.com/conradocontreras. Yellow Cab Austin has already made its first donation and will match every dollar donated up to the first $2,500 in outside donations.

The South Lamar Corridor Improvement Program has extended their survey/comment deadline by one month to July 17. Review the draft plans for South Lamar that were presented at a May 27 open house, and submit comments and questions through an online survey at www.austintexas.gov/southlamar.

Happy Birthday to Windsor Park Library! East Austin's Windsor Park branch celebrates 15 years of service to the community, with a party 4-8pm Wednesday, July 15 at the library, 5833 Westminster, with live music from the Wheatones and the Walter Daniels Band, Toni Maxaroni the Texas Clown, rescue dogs, birthday cake, and more!

The July 4 holiday weekend, generally one of the busiest times of the year at the Austin Animal Center, saw a 25% drop in intakes of lost and stray pets compared to 2014. With increased tagging and microchipping of pets, many of those missing have been returned to owners, and more than 60 pets have been adopted since the 4th. But the $25 Super Shelter Adoptathon is still in effect through July: Austin Pets Alive!, Austin Humane Society, and Austin Animal Center join to offer $25 pet adoption fees at all three facilities. All pets are spayed/neutered, vaccinated, and go home with a collar, tag and microchip.

Do you need help filing a flood insurance claim? FEMA's National Flood Insurance Program has a call center staffed with specialists who can assist Texas policyholders; call 800/621-3362, Mon.-Fri. between 8am-6pm. Staff can answer questions about insurance, and also serve disaster survivors who have general questions about the National Flood Insurance Program. Texans who prefer to put their concerns in writing can find a "Request for Support" form at www.fema.gov/national-flood-insurance-program.