September 1: That's the date set by the Texas Supreme Court to hear the long-running challenges to the state's public school finance system. But with no ruling expected until next year, and new legislation unlikely before 2017, Austin ISD faces an increasingly desperate financial future.

After the legislative session, the district's finance department calculated AISD would receive $10.6 million in recapture relief – the reduction in payments to the state under the Robin Hood recapture system. However, new calculations from the Texas Education Agen­cy suggest that could fall to $2.4 million, a figure AISD Finance Executive Director Leo Lopez called "negligible for a budget our size."

Blame House Bill 1474, which reformats the Instructional Materials Allotment. This portion of the state contribution, which covers instructional materials, technological equipment, and technology-related services, was previously paid out yearly. Under HB 1474, those funds will be doled out as one lump sum at the beginning of the biennium. Author Rep. Gary VanDeaver, R-Clarksville, said this would "allow districts to spend allotments more efficiently" through two-year planning. However, this is the unfathomably complex Texas school finance system: Pull one rope, and five more twitch. Because the IMA goes up, AISD suffers an $8.2 million cut in its per capita apportionment, thus the recapture relief cut.

There is even worse news for the total recapture payment. During the Lege session, staff calculated a $228 million bill for 2016 (see "The Education Session," May 1). But revised provisional property valuations from Travis County put that projection at $261 million – close to 30% of all property taxes for maintenance and operations expenses. Lopez said, "If current trends hold, we'll be looking at over $300 million for next year."

That's another blow delivered by the 84th Legislature among a catalog of school finance failures. The closest thing to omnibus reform, HB 1759, by House Public Education Chair Jimmie Don Aycock, R-Killeen, sputtered out: a particularly savage blow locally, since its draft text delivered an extra $96 million to AISD in new money and recapture cuts. So now AISD faces two choices: deeper cuts, which board President Gina Hinojosa says will be hard to find; or creative new ways to generate revenue, like more aggressive student recruitment. The district has already gone down that path, she said, "but these are things that have just started, so we haven't seen the fruits." 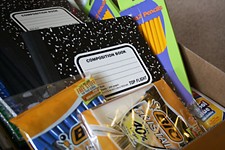