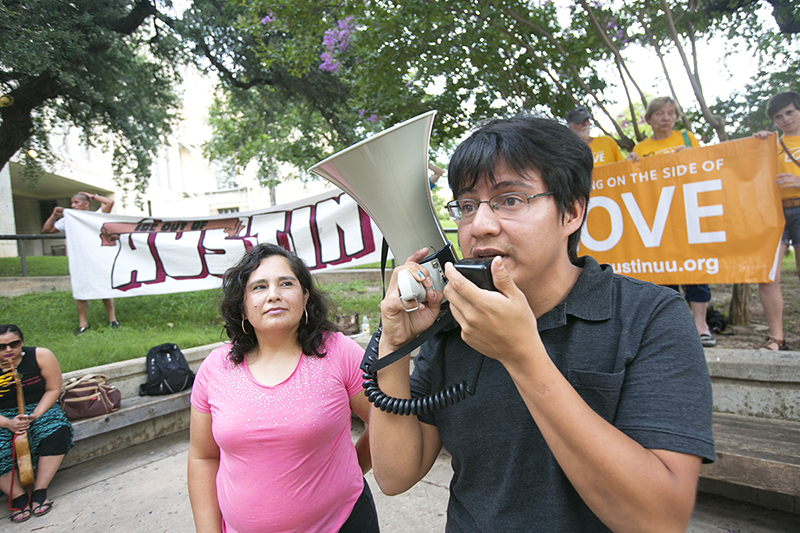 Long the public face of the Austin Immigrant Rights Coalition, Alejandro Caceres recently left his post as executive director. But his exit is mired in mystery, with hints of infighting between Caceres and the AIRC board over the coalition's vision.

Caceres had worked for AIRC since 2010 – starting as a volunteer before ascending to the top leadership position. Something of a fixture at various immigration-related events, Caceres has distinguished himself as one of the most vocal critics of Travis County's participation in S-Comm. (See "AIRC, S-Comm, and the Fight for Immigrants' Rights," Aug. 13.) Since his departure from AIRC, Caceres has been working closely with Grassroots Leadership.

"The board decided local campaigns are not something they wanted to engage in," Caceres told the Chronicle. "The board wants to handle Texas legislative comprehensive immigration reform. I've always found that to be tiring and doesn't produce enough wins for people," he added, noting that about 15 AIRC members have opted to follow him out the door.

AIRC disputes Caceres' account. Interim Executive Director Antolin Aguirre said the AIRC would continue its local grassroots campaigns while keeping an eye on state and federal issues that impact the Latino community. He pointed to today's scheduled vigil outside the Governor's Mansion (see p.21) as an example. "From the beginning, the mission of the coalition was to work for the community, whether it be at the local, state, or federal level," he said in Spanish. "When things work, it's because the community is involved."

Case in point is current work dubbed En Comité, where Aguirre meets 10 undocumented immigrants at a time to inform and educate them on their rights should they be ensnared by immigration officials. They then each meet with 10 others, spreading their knowledge through the community. "With that education, they are able to defend themselves and, in turn, educate others in all the areas that affect us," Aguirre said.

AIRC is entirely immigrant-led. Aguirre himself is a native of Rio Bravo, Tamaulipas, Mexico, who immigrated in 1988 before eventually securing citizenship under an amnesty program launched during the Reagan administration. Married with five children, Aguirre is the owner of the thriving Rey de los Antojos (King of Cravings) truck, located outside the Fiesta on 38th ½ Street.

The front page of the AIRC website broadcasts the split with Caceres: "The current active membership of AIRC would like to inform our trusted friends and allies of several painful and troubling developments that have occurred without our consent. Three individuals who constituted our board, and whose role was intended to be advisory, have taken it upon themselves to displace our leadership and instate a new (and illegitimate) leader. We do not acknowledge this change in leadership or recognize this individual as a representative of the organization that we have poured our hard work and vision into."

Neither Aguirre nor Caceres would speculate as to the creator of the post (although Aguirre did acknowledge that Caceres knew the website's password). "I can't speak badly about Caceres," Aguirre said. "All I can say is the community has elected me, and I'm serving in a voluntary capacity. I don't like gossip, but prefer to get to work. We didn't have access [to the website] and how sad the medium is now being used to defame."

The revamped AIRC has earned the support of other, similar organizations, according to Aguirre, including Reform Immigration for Texas Alliance, and the El Paso organization Red Fronteriza por los Derechos Humanos (Border Network for Human Rights).