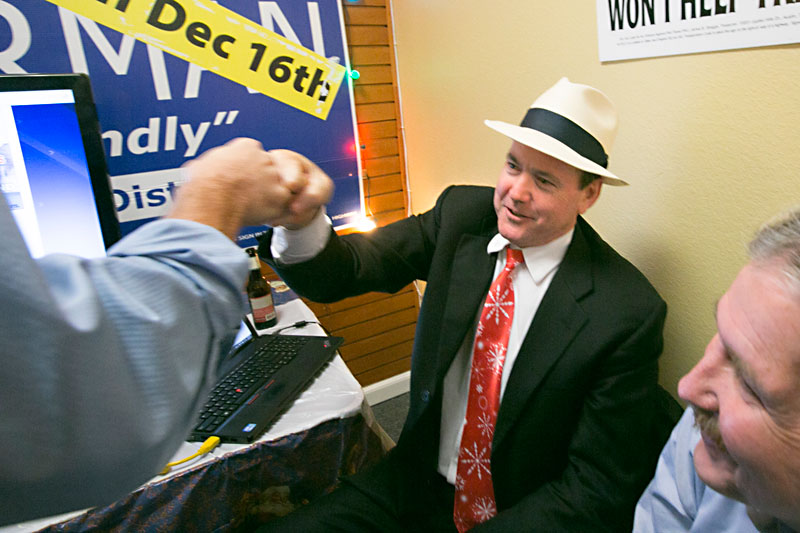 Last Friday's Supreme Court ruling legalizing same-sex marriage across all 50 states set off a wave of celebration across the city, from the hordes guzzling 50-cent drinks on Fourth Street to Mayor Steve Adler preparing to attend a wedding the following day. But a social media storm was already brewing over Facebook comments made by District 6 Council Member Don Zimmerman, comparing marriage equality to pedophilia.

In response to someone else's post invoking the Supreme Court's Loving v. Virginia decision, which legalized interracial marriage in 1967, Zimmerman posited: "Replace [gay with] pedophile, then explain how you can justify denying marriage happiness to a couple in love based on age discrimination. In fact there is no such thing as 'pedophilia,' only 'intergenerational love.' Explain why you are a pedophobe and why you're opposed to love and equal rights. Who gives you the right to pass judgment against those you disagree with?"

Zimmerman strutted into his previously scheduled town hall meeting Saturday afternoon at the Lord of Life Lutheran Church guarded against press inquiries. When approached by the Chronicle for an interview, the Council member declined, and further requested the paper "stop harassing" him. After presentations by APD on property crimes and TxDOT on road construction, Zimmerman took the stage and made himself available briefly for questions.

Democratic activist Will Davies asked Zimmerman if he thought pedophilia is the moral equivalent of homosexuality. First detailing his longtime stance against marriage equality, Zimmerman predicted a new wave of opposition in the wake of the ruling. Then, he pointed residents to an exclusive interview with former City Council candidate and gun rights radio personality Michael Cargill, which aired on Sunday.

"I've been in a same-sex relationship with my partner since 1998," Cargill told the Chronicle by phone on Monday, explaining why he reached out to the CM. "I wanted his take on what he actually wrote, so he could explain more in detail, rather than a little Facebook or Twitter posting, or something like that. So I wanted to see where he was coming from, and kind of explain himself. We're friends, and I'm still going to remain friends with him. We're just going to disagree on this topic."

In a short segment, Zimmerman essentially sidestepped his comments, and instead talked about his support for Texas' 2005 ban on same-sex marriage, made biblical allusions, discussed Dred Scott and Roe v. Wade, and hunkered down on his North American Man/Boy Love Association (NAMBLA) metaphor.

"My objective when I interview anyone is to get their perspective," Cargill explained. "I'm not there to bash them or anything like that. I do want them to be able to speak freely and honestly about how they really feel. And that's what I wanted to do – get his full perspective on what his thoughts were. So that way we, as Austinites, can understand who our elected officials are."

Monday at 8am, law clerk Mark Walters filed a complaint with the city to be reviewed by the Ethics Commission. The complaint, published in advance by the Austin American-Statesman, expresses concern about Zimmerman using a public forum to express those views, and suggests the Council member may have used a city computer or a city-paid cell phone to post them.

"The city code of ordinances is very clear about the expectations of public officials," he continued. "They have to provide the public with a sense of confidence and integrity. And I don't believe that Mr. Zimmerman has done that."

From Austin's sister city of Hackney – outside of London – Adler gave a muted response to Zimmerman's comments. "I disagree with what he said. The opinion is right. I think the Constitution protects people from discrimination. And I think it's consistent with how Austin wants to treat its residents, so I was very happy with the result."