The End of Family Detention?

Positive changes coming, but some say it's not enough 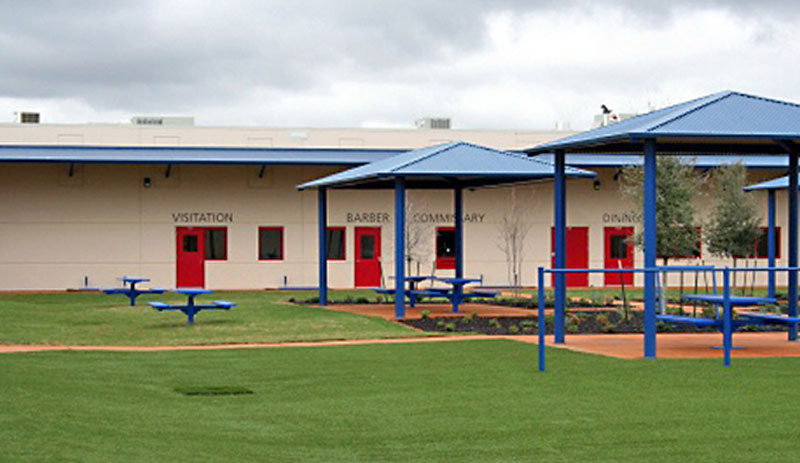 The playground at the Karnes County Residential Center (by U.S. Immigration and Customs Enforcement / Wikimedia)

Immigrant advocates applauded changes to the Obama administration's family detention policy unveiled last week that has the lowering of bonds as the cornerstone of the revamping. Categorizing the change as a first step toward reform, activists continue to call to an end to the practice of holding immigrant families.

Jeh Johnson, the secretary of the Depart­ment of Homeland Security, announced changes that would include lowered bonds and a heightened effort to conduct interviews with detainees to firmly establish their "credible fear" of returning to their homelands as part of their pleas for asylum. Immigrant advocates have long decried the high bonds set for detainees – recent ones have ranged from $7,500 to $10,000 – and the lack of uniformity in determining their levels.

"I cried when I read it, and they were happy tears," said Virginia Raymond, an Austin-based immigration attorney who's represented roughly 20 families kept in the for-profit Karnes County Residential Center, located 100 miles south of Austin in Karnes City, Texas. But her joyful tears are tempered.

"Because I spent so much time with those families, I have a very palpable sense and knowledge of the anguish that all of those additional months caused them," Raymond said. "Their lives would've been different if the policy announced yesterday had been in place before ... the family released in June would've been released in early December," she said of one family she represents pro bono.

Raymond recently secured the release of a Guatemalan woman with a 12-year-old son; a Brazilian woman with a 10-year-old daughter (a case she lost but on appeal); and a woman from El Salvador with three girls ranging in age from 11 to 16 years old.

Bob Libal, executive director of Grass­roots Leadership, also is calling for an end to the program. In May, his members joined more than 600 protesters – including a caravan of parishioners from Austin-based St. Andrew's Presbyterian Church – gathered outside the recently opened South Texas Family Residential Center in Dilley, Texas, calling for its closure. "I think there is some positive movement of Johnson's announcement," he said. "They are feeling the impact of what has been unanimous outrage over the decision to incarcerate kids and moms. But I don't think it goes far enough."

Libal points out the built-in incentive to keep families detained, given the for-profit nature of the detention camps – operated by publicly held companies that bill the government $300 a day to detain each immigrant. "There is no way to humanely detain a kid in one of these detention camps," he adds.

More positive movement is imminent: ICE issued a memorandum June 29, strengthening the standard of treatment of transgender detainees. While many immigration advocates claim the protections don't go far enough – there is still the possibility that trans detainees will be housed according to their biological sex, or in an isolated unit – ICE does direct staff to ask detainees if they "wish to disclose [their] gender identity," use detainees' preferred pronouns, as well as work to provide them appropriate housing.

New York City-based Immigrant Justice Corps plans to deploy 70 of its fellows to both facilities to help immigrants fight deportation and release from imprisonment. Teams of attorneys will be sent to represent immigrants in two-week rotations – a mass deployment of expertise months in the making but heightened in the wake of revamped release bonds.

"Hundreds of thousands of people have been deported without having had representation from a lawyer," said Rachel B. Tiven, executive director of Immigrant Justice Corps, in a phone interview. "Only one-and-a-half percent of women and children detained in Texas now without a lawyer are going to win their cases," she said, citing a Syracuse University study showing incarcerated mothers are 17 times more likely to win their case when they have legal representation than when they don't. "This is fundamentally un-American," Tiven said of the U.S. detention policy. "These are mothers who have left increased violence and gang rule to protect their children. They are doing what I would do to protect my own children."

To Raymond, the past is prologue: "The closest thing to it is Japanese internment," she said, referencing an ugly chapter in U.S. history when Japanese-Americans were incarcerated following the Japanese attack on Pearl Harbor that led to war.

"What I tell my friends is that we can celebrate we've gotten this far, but not to relax," Raymond said. "There's still a lot more work to do."