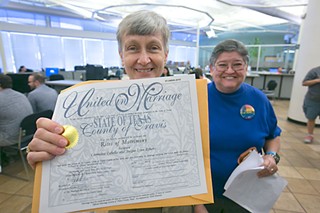 Last Friday, the Travis County Clerk's Office transformed from bureaucratic building into a site of momentous liberation and equality for dozens of long marginalized couples. Soon after the U.S. Supreme Court delivered its historic ruling, requiring same-sex marriage to be recognized as legal in all 50 states, a record number of local residents flocked to the offices on Airport Boulevard to see their relationships fully realized or to simply partake in the celebration.

Staring in disbelief at their brand-new license, Austin couple Marti Bier and Sanaz Faili were among the first in Austin, and the state, to receive the official paperwork. After 14 years and two children, their love is now legally recognized by Texas – a state notoriously hostile to gay rights. "We've fought for this for so long. It still feels surreal," said Bier, who participated in activism against the state's 2005 ban on gay marriage. "It's nice to know that in the eyes of the state and by law, we are what we've always known we are – a family and a committed, loving couple."

In a remarkable victory for the LGBTQ community and its allies, the Supreme Court affirmed marriage equality in a 5-4 vote on June 26, barring states from denying same-sex unions. "Under the Constitution, same-sex couples seek in marriage the same legal treatment as opposite-sex couples, and it would disparage their choices and diminish their personhood to deny them this right," wrote Justice Anthony Kennedy, joined by Justices Ruth Bader Ginsburg, Elena Kagan, Stephen Breyer, and Sonia Sotomayor. Chief Justice John Roberts dissented, along with other conservative-leaning Justices Clarence Thomas, Samuel Alito, and Antonin Scalia, who, in a scathing, and at times hysterical, separate dissenting opinion, called the ruling "pretentious," a "threat to American democracy," and an affront to the Constitution.

While the Travis County Clerk's Office initially paused to ensure the go-ahead from county attorneys, they promptly began issuing marriage licenses to same-sex couples at 10:30am after all legal questions were cleared. By the end of the day, the county staff – some working more than 13 hours – had issued more than 313 marriage licenses to both same- and opposite-gender couples. (By comparison, 17 were issued the day prior.) Additionally, some Travis County judges waived the 72-hour waiting period usually required before tying the knot in a ceremony. The county's alacrity and eagerness comes as no surprise – in February, Travis County Clerk Dana DeBeauvoir granted the state's first (and at the time, only) legal same-sex marriage license to Austin residents Sarah Goodfriend and Suzanne Bryant (see "Marriage Equality Comes to Texas," Feb. 27). 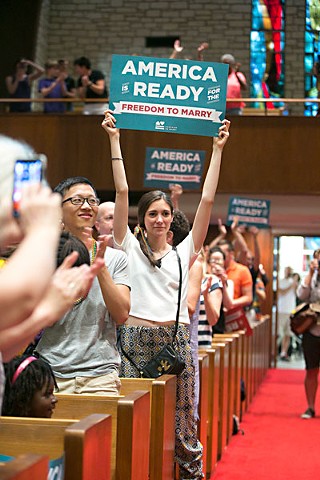 Tears of joy and relief flowed through the county's packed room of couples, who were joined by equally ecstatic friends and family, waiting their turn to inch one step closer to marriage. Austin resident David Quinto-Pozos, there with partner Manuel (who legally changed his last name in 2001 after an unofficial wedding ceremony), said he never expected to witness a favorable marriage equality ruling in his lifetime. "There have been so many strides for LGBT rights in the past decade, so on some level I should have seen this coming, but it's still hard to believe," he said.

Echoing the amazement of his partner of 17 years, Manuel pointed to the many rights opposite-sex couples have long enjoyed. "We are finally seen as equal in the eyes of the law and civil society. Now, we are not disadvantaged when it comes to visiting our partner in the hospital and making important medical and end-of-life decisions." Manuel also added that the momentum today should be carried on to continue lingering battles in the gay community. "I hope we can take this energy and apply it to areas where we still see injustice, like transgender rights, people of color, and LGBT homeless youth," he said. "This fight for equality is not over."

Among the crowd was openly gay Texas state Rep. Celia Israel, D-Austin, who stopped by the office to show her support. "I'm really proud today," Israel told the Chronicle. "We've worked so hard for so many years on LGBT issues; finally Texas is being dragged into the 21st century. It's a good day to be Texan." As his district is home to the clerk's office, District 4 City Council Member Greg Casar headed to the office Friday morning to join the celebration. "It's really special to share this historic moment in my district," said Casar. "It's usually hard to see progress, but it's times like these that show us we can be a better society."

While Travis County welcomed LGBTQ couples with open arms, other counties around Texas weren't so enthusiastic. Close to home, Williamson County first refused to offer any licenses following the ruling Friday, claiming that the county attorney was still reviewing the law and that because the marriage application had changed, extra time was needed to update software. (Yet, later in the day the county attorney allowed an opposite-sex couple to obtain a license.) Finally, Williamson came around and began issuing licenses under the high court's order Monday morning. And a handful of previously resistant counties – including Bastrop – have followed suit. 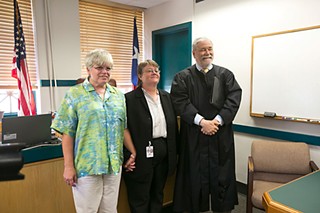 Deanne Croan (l) and Ingrid Ellerbee, who have been together for 17 years, and Justice of the Peace Herb Evans

Some 149 counties are already offering licenses, and 46 will start soon, according to Texas for Marriage.

As expected, conservative Texas officials took the opportunity to desperately grandstand and perform political theatrics against gay rights. Carrying the legacy of his predecessor, now-Gov. Greg Abbott, anti-LGBTQ crusader Attorney General Ken Paxton issued a six-page nonbinding legal opinion – at the request of anti-gay advocate Lt. Gov. Dan Patrick – backing up county clerks who wish to refuse licenses based on "religious objections." However, the AG warned that doing so could very well result in litigation and/or a fine (of up to $500), but that "numerous lawyers stand ready to assist clerks defending their religious beliefs, in many cases on a pro-bono basis." The strength of "any particular religious accommodation claim depends on the particular facts of each case," he repeatedly noted. The opinion compelled state Sen. Rodney Ellis, D-Houston, to write to the U.S. Department of Justice on Monday, urging them to monitor the implementation of the ruling in Texas, and intervene if necessary to "ensure that Texas officials do not flout the Supreme Court's ruling and blatantly discriminate against same-sex couples."

Rebecca Robertson, legal and policy director with the ACLU of Texas, framed Paxton's claims as misleading. While religious liberty is a fundamental American value protected by the First Amend­ment, when the government comes into play it's not the First Amendment that's at issue – it's the 14th Amendment, which requires all government employees to treat every Texan who walks through the county clerk's offices exactly the same, regardless of who they love, she said.

"It's certainly concerning to us that some people might think that religious liberty gives government actors the right to use their personal religious beliefs to deviate from the ruling and discriminate against people – it doesn't," Robertson told the Chronicle. "Even the AG seems pretty tentative in warning people that if they follow his advice they may open themselves up to lawsuits." Robert­son is optimistic resistance won't lead to a trail of litigation. As the ACLU has witnessed in other anti-LGBTQ state leaders, avoiding compliance is short-lived. "Opponents eventually realize they need to follow the Constitutional requirements. I think we are seeing that in Texas, as more and more counties fall in line."

Undeterred, Travis is far from budging – as of press time the clerk has issued a total of 461 marriage licenses to both same- and opposite-gender couples since the high court's mandate. In response to Paxton's initial call to halt licenses, Ronald Morgan, chief deputy Travis County clerk, told the Chronicle, "While we appreciate the attorney general's recommendation, we follow the legal advice of the county attorney, so his opinion is not binding in this office. We are obligated to follow the law and today the law is marriage equality, and we are overjoyed to comply."

For LGBTQ couples that have long fought for equal rights in a political environment intensely averse to granting them those rights, the ruling is a crucial step toward justice. Just before obtaining their license, Brittany Tovar, standing alongside partner Ana Isabel Lopez, said the SCOTUS ruling delivered a sense of validation. "It's given us a certain amount of humanity," said Tovar, with tears in her eyes. "I feel like a real citizen today." 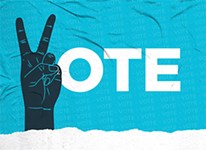 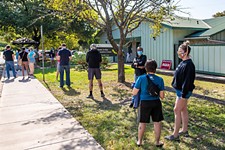 Election Ticker: Getting Out the Vote and Then Some
Texas heads into early voting