Her Body, Her Choice

Local donates self to "Body Worlds"

Of the people who would want their body to be preserved and publicly displayed after death, Cheryl Morris doesn't fit the traditional mold. The petite South Austin native – mother of two grown daughters, married to her seventh-grade sweetheart – is a hairstylist, an artist, and a writer. She's even completed triathlons. However, Morris has signed up to donate her body to "Body Worlds," the touring exhibition of human remains.

While Austin considers what to do with its cemeteries (see p.18), its residents consider options for their own mortal remains: Some donate their organs for transplant, while others donate their whole bodies for dissection by medical students. Then there are body farms like the Forensic State Anthropology Center at Texas State Uni­ver­sity, where scientists research rates of decay. "Body Worlds" takes that kind of anatomical education out of academia and into the public sphere. The traveling exhibit, currently at the Texas Museum of Science and Technology, displays partial and whole cadavers preserved through a process called plastination. This removes all the water and fat that cause decay; the preserved bodies are then dissected and posed to show exactly how humans work.

Morris called the exhibit a mixture of art and information, and sees donating her body, with its particular issues, as a way to continue that aim. "I went out of my way to not look like your typical person with health challenges," she said, but she's been through more than most people could endure. At the age of 10, she showed symptoms of a severe condition, but it eluded doctors for five years. Finally, one physician poked her in the side, and told her parents: "Take her to the hospital right now." She had ulcerative colitis. It was an easy diagnosis to miss because, as she noted, "at that time it was an old person's disease." That didn't make it any easier when she underwent massive surgery to remove much of her digestive system, and, "The rest of my life has just been adapting to whatever they throw at me." Since then, Morris has had 25 major surgeries. "I have more tubes going in me than out of me," she said. "My surgeons said, no one can go in [my body] that hasn't been there before." It's even brought her a certain degree of fame: After one revolutionary surgery, she was featured in a medical magazine. "Playboy was my goal. Oh, well."

In 2010, her oldest daughter took her to the "Body Worlds" exhibit when it was visiting Houston. It became what Morris called "a classic 'aha!' moment." It was being in front of a nervous system, removed from but still recognizable as a body, that most moved her to donate her body to the exhibit. She said, "Being able to see the inside of a human being, I felt overwhelming gratitude to that person."

Texas Museum of Science and Technology Executive Director Torvald Hessel had a similar experience. He said, "One of my muscles tore in my foot once, and I was walking through the exhibit and seeing it and going, oh, that's the one." He understands the impetus to donate one's body to medical science: His grandmother, a nurse, did it. He said, "This is the same thing, but taking it a step further." While some may see "Body Worlds" as ghoulish, he sees it as an examination of life. "This is not an easy exhibition," he admits, but he believes that it is the purpose of a facility like his to pose difficult or complex questions. And, he said, "You don't get an issue that is more complex than about yourself."

When Morris finally dies, the fact that her body will become a learning tool will be a continuation of her life. She was a customer at lingerie store Soma Intimates, but as time went on, she said, "I started thinking about all the women who walk around who are altered." Now she works there. "Every­one in the store knows my story, and women who come in who have things going on, they send them to me." As much as selling clothing, she sees her job as "helping a person see themselves differently. Just opening their eyes." And it's not just people with medical conditions, she said: "You would be amazed how many women of 80 years old hate their bodies. Can you imagine going that long?"

While she calls her body "a battlefield," Morris has made some kind of peace with it. "This here is nothing but a shell," she said. "You can dress it up, you can do what you like with it, but it's a shell. The core human being that's deep inside, they can't remove that." Her hope is that someone will have the same revelatory experience that she had in front of that wall of nerves. "If there is anything that can come of me being displayed in any way, any of the organs I have left, it would be worth it for me." 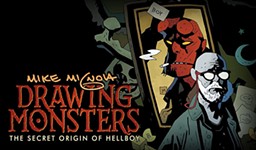