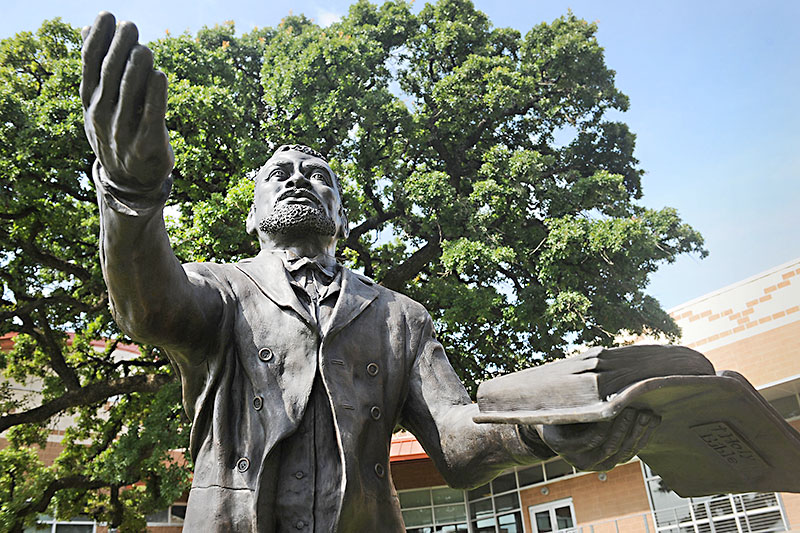 Figurative renderings of important black community members went on display last week at the George Washington Carver Museum to commemorate Juneteenth. The preacher could "speak his word" and deliver messages to freed slaves, according to museum curator Bernadette Phifer. (Photo by John Anderson)

City Council completed its final bits of business last week before the July hiatus, taking a break until budget workshops resume July 30, followed by the next regular meeting on Aug. 6. For some stock-taking, see "Council: Midterm Report Card."

Karen Kennard, former city attorney who led the city's legislative liaison team in the recent session, has decided to resign rather than stay in that position as Intergovernmental Affairs Officer. (Anne Morgan is now the city attorney.) In a memo to City Council, City Manager Marc Ott said he would consider replacements for open executive positions after budget preparations.

The Department of Justice has come down on Kung Fu Saloon over allegations of racial discrimination. In a settlement agreement issued Tuesday, the DOJ claims the Downtown bar discriminated against black and Asian customers and unfairly used a dress code to do so. Under the terms of the decree, employees will undergo civil rights training and must enforce a nondiscriminatory dress code. Kung Fu denies the allegations but entered the agreement to avoid "costly" lawsuits.

Funeral services took place Tuesday for fallen Hutto Police Sergeant Chris Kelley, 38, killed on June 24 while attempting to arrest Austin resident Colby Ray Williamson. Williamson allegedly threw Kelley to the ground during the apprehension, jumped into Kelley's patrol car, and ran him over as he drove away.

Austin Regional Clinic, the area's biggest private clinic system, is taking a stand against the anti-vaccination craze. From July 1, its pediatric doctors will only accept a new patient if their parents have either had them vaccinated or are prepared to put them on a catch-up schedule.

County clerks are furious that Gov. Greg Abbott and Attorney General Ken Paxton left them out to dry over gay marriage, according to emails obtained by the Fort Worth Star-Telegram. By letting them decide whether to issue marriage licenses to same-sex couples or not, it's the clerks, not the state, that face prosecution.

Austin Bergstrom International Airport could expand after council instructed staff to start negotiations to renovate the old south terminal. The airport regularly sets passenger records through its single operating main terminal, while the smaller south terminal has been mothballed since 2009.