No More Pencils, No More Books ... 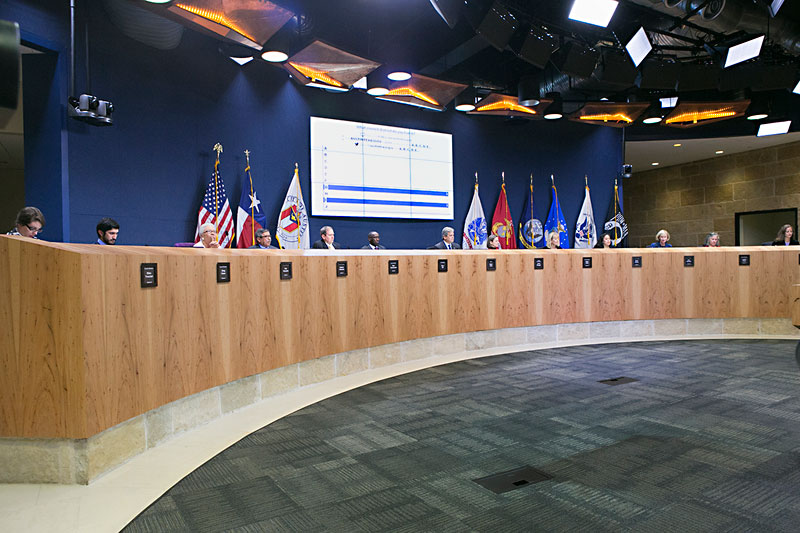 By the time you read this, presumably City Council will have informally adjourned for summer break: Work can proceed (especially at the staff level, intensively for Financial Services), but Council does not resume its formal meeting schedule until July 30, when FY 2016 budget work sessions begin in earnest, and occupy most of August into early September. (I write "presumably" because this Council has been kicking a lot of cans down the weekly agendas, and today's "final" meeting – June 25, the day after the Chronicle goes to press – may turn out not to be quite final after all.)

In the past, most Council members have made themselves somewhat scarce for a couple of weeks; a few left town pronto and officially stayed more or less incommunicado. Whether the 10-1 Council, which generally likes to distinguish its new-and-improved procedures from all and sundry that have gone before, will follow suit, remains to be confirmed.

There will be a presumably brief agenda today, as Council first meets in the morning as the Austin Energy committee of the whole, and then turns to its regular order of business for action votes – e.g., perhaps recommending to itself in the morning, acting in the following session. (If you're already confused, blame the last Council's decision not to move AE toward an appointed board, as threatening the delicate balance between democratic representation and managing effectively a major utility business.)

Last Thursday's meeting (June 18) reflected widening cracks on the dais – some procedural, some substantive – and they didn't disappear by Tuesday (June 23), the first of two "special-called" sessions to address matters that have been accumulating for some time. The June 18 agenda originally listed 110 Items – by far the lengthiest of this year's meetings – for two major reasons: The dais had gotten in the habit of postponing its most difficult decisions (complex or just politically awkward), and then the summer deadline loomed, and city business needs to proceed whether Council is in session or not. Mayor Pro Tem Kathie Tovo (the only holdover/experienced member), made a point of noting that had earlier agendas not been so short, perhaps this one wouldn't be so long. "This is a big city with a big budget," she reminded her colleagues. "We still have to conduct the business of the city."

So, faced with the likelihood that conducting all that business was not going to be accomplished in a day, Council scheduled an additional meeting Tuesday and then added some unrelated matters to today's AE agenda. And when Tuesday's morning session opened, a mild internal coup took place. Several CMs had already begun pushing back against the pattern of some members – generally one of the three westsiders, D6's Don Zimmer­man, D8's Ellen Troxclair, and D10's Sheri Gallo, but to a lesser extent D1's Ora Houston as well – to pull for discussion many contracting or purchasing items, and then to interrogate staff on matters of cost, utility, history, and so on, generally with the implication that the costs have been excessive or arbitrary and staff negligent in managing the city's business. (Gallo and Troxclair are usually polite and professional; Zimmerman is reflexively condescending, occasionally abrasive.)

D2 CM Delia Garza had earlier weighed in against micromanagement (most specifically in the staff "vacancy" discussion that proceeded for weeks and eventually came to virtually nothing), and D7's Leslie Pool has also increasingly objected to the contract nitpicking, on substantive grounds and also because it was gobbling increasing amounts of Council time. By Tuesday, she effectively collaborated across the dais (literally the Boards and Commissions Room tables) with D4's Greg Casar, who informed his colleagues that on contract, purchasing, and real estate matters he intended to call the question after an initial explanation by whatever CM had pulled the Item – and with seconds from Pool, there were a series of 6-3 or 7-3 votes (new mother Garza was absent) that essentially informed the three persistent dissenters: You can try to stick a wrench in the works, but we're going to get the production line moving again.

A few of these obstructions have been triggered simply by expensive contracts – one bone of contention was the Downtown "wayfinding" project that Gallo and Troxclair objected to because of cumulative cost and because, Gallo argued, "Most of us have smartphones and can find our own way" (although the innovative system is in fact designed to work directly with smartphones) *[see correction below]. The silliest was a diversion over a hay-and-pecan revenue-producing contract with a farmer on Austin Water's Hornsby Bend property, used, among other things, to manufacture Dillo Dirt; Troxclair and Zimmerman wanted to shorten the option years despite AW staff patiently explaining that it takes time for land and crops to be improved and developed, and farmers are less likely to commit to projects that ignore agricultural timelines. (Similar nitpicking proceeded over Fleet Services bulk deals with manufacturers for new cars; Zimmerman insisted that used cars are always cheaper – despite staff's dogged insistence that you can't direct-buy used cars in bulk at a manufacturer's discount.)

At any rate, goosed by the prevailing motions to call the question and Council's sudden eagerness to get things done, the Tuesday session did manage a few accomplishments. In several highlights, Council:

• Despite some misgivings about effectiveness, approved a new Austin Energy "deferred payment" system for customers who fall way behind on bills;

• Approved the wayfinding system, with the proviso that staff regularly report total funding in addition to annual installments;

• Authorized negotiation and execution of a laptop/tablet-lending contract for libraries (after Zimmerman objected – in error – that the system didn't accommodate Windows OS);

• Approved the eventual purchase of $8.2 million worth of new vehicles;

• Discussed, but did not approve, the new Austin Water drainage charge structure(**more precisely, the Watershed Protection charge billed through AW), likely to increase the burden on homeowners but lessen it on multifamily renters (who use less impervious cover).

That leaves plenty to be done today:

• A construction contract for "chilled water" piping that will eventually amount to $12 million over five years (CMs hope to have questions answered by today);

• A $300,000 consultant contract for an independent review of AE's Resource, Gener­a­tion, and Climate Protection Plan (Zim­mer­man wanted to make an issue of the allegedly unconsidered cost of Climate Protection – which he disdains – but his colleagues refused to concede);

• Extending an existing contract with nonprofit West Austin Youth Association for Lamar Beach parkland (CM Houston has attempted to link WAYA with the proposed – and traction-less – Decker Lake golf course in her district, without success);

• A deal currently being worked out to allow Fun Fun Fun Fest to return to Auditorium Shores (we shall see);

• And a discussion, but no action planned, on Council's boards and commissions appointment process, notoriously languishing as volunteer terms expire.

And if they manage all that today ... school's out for the summer.

*Correction: This passage has been corrected to reflect that CM Sheri Gallo, not CM Ellen Troxclair, made the remark concerning smartphones.

**Clarification: The drainage fee or charge concerns the effects of impervious cover on the watershed, and is precisely assigned to the Watershed Protection Department, although the charge is included on the water and wastewater bill.