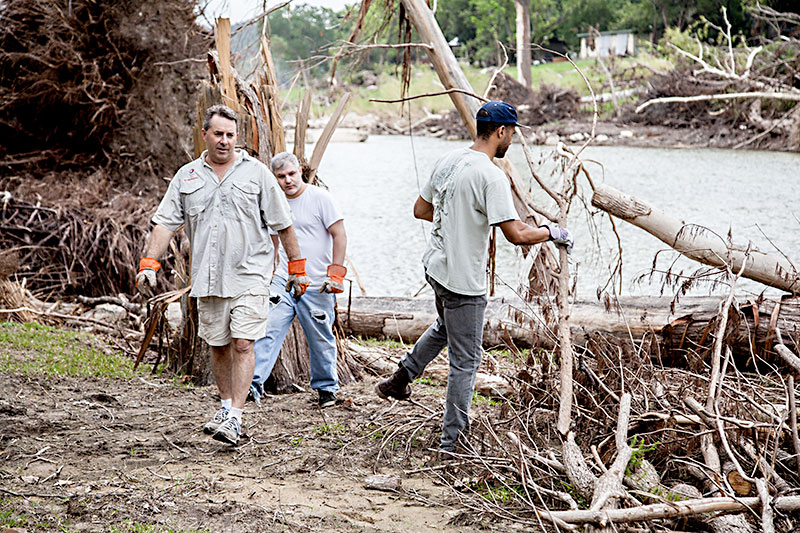 The Chronicle team gathers fallen brush and debris along the Blanco River. (Photos by Kat Goins)

Stepping across the sodden linoleum floor of a house that no longer exists, I surveyed the rushing Blanco River and the fallen cypress trees littering its banks. Sheared to the bark, they were still bent, this past Saturday, June 20, in the direction of the flood waters that devastated Wimberley, San Marcos, and other parts of Hays County on Memorial Day weekend.

Like so many across Texas, staff at the Chronicle were touched by the storms: My family's home in San Marcos was flooded with over six feet of water, and marketing manager Dallen Terrell's grandparents, Gay and Michael Sullivan, received a direct smack from the Blanco.

Homes along the Sullivans' street were tagged with red or yellow signs, designating whether owners will be allowed to restore the structures. If yellow, like the Sullivans, work can begin; if red, the entire house is unsafe and must be demolished. Some, like the neighbors whose foundation I was standing on, didn't have to wait for a designation – their entire house was just washed away. Terrell's aunt, Gail Schaubhut Fisher, explained the fallen trees will mostly stay as they are – bent and shucked – in order for them to sprout saplings that will endure far longer than all of us. It's hard to remember, with precious items soaking in the mud, that this is all a part of nature's renewal.

Seventy homes in Wimberley were completely washed away, and about 300 were damaged. Six days after the floods, President Obama declared a natural disaster in three counties. FEMA descended to offer tangible aid to people who had previously been paralyzed by the extent of the damage. In San Marcos, two mobile stations, at the San Marcos Activity Center and the Blanco Gardens Neighborhood, set up to connect home- and business-owners with available aid. Even homeowners with flood insurance can apply, and depending on personal circumstances, can qualify for grants, up to $200,000 in disaster loans, and temporary housing. Undocumented immigrants with a U.S.-born child can also secure "short-term, non-cash" help.

But in the weeks since, even families that have been able to secure aid or volunteers have been hampered by persistent rains, both in terms of work days lost and construction setbacks. In the early evening Saturday, the rain began again, and work came to a stop at the Sullivans'. Terrell's grandfather covered his 1967 Alfa Romeo with a tarp. – Nina Hernandez 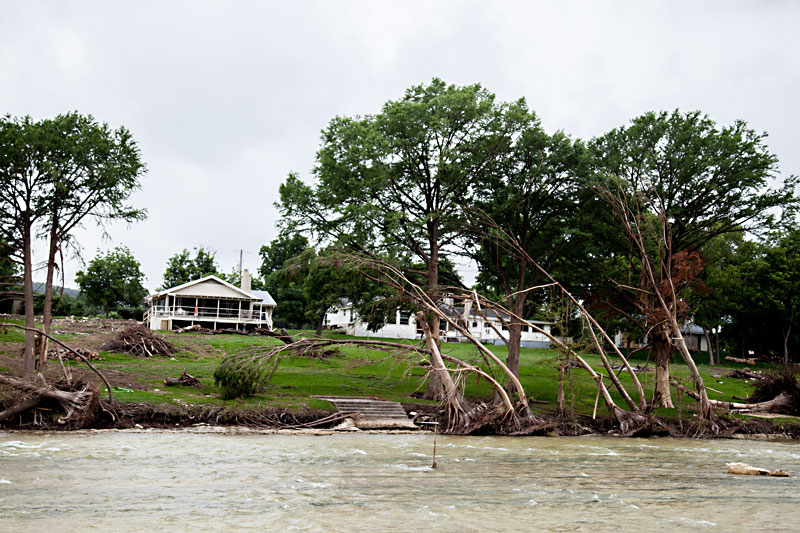 Relief efforts continue. If you're interested in getting involved, here are some ways to contribute time, money, or resources. – Kate Messer

• The most up-to-date info on the Volunteer Resource Centers in San Marcos and Wimberley are at the city of San Marcos site: www.sanmarcostx.gov.