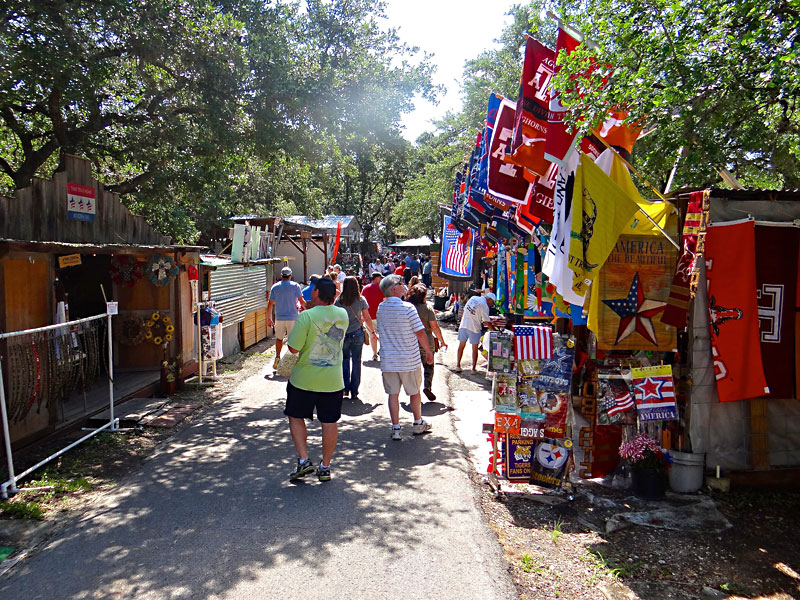 A steady flow of visitors enjoyed the glorious Hill Country morning and filled flood relief donation buckets at the Wimberley Lions Market Days, which opened for business this past Saturday, June 6. (Photo by Kate X Messer)

City Council meets today (June 11) with a heavy (28-case) zoning agenda, a couple of public hearings, and some Council proposals that could generate sparks: a property-tax freeze for the elderly and disabled, more designated funding for low-income assistance programs, and a move to create a "sobriety center" to reduce public intoxication arrests.

Early word on the bag-ban report by Austin Resource Recovery – to be presented to the Zero Waste Advisory Commission Wednesday – is that the two-year-old ban on most single-use plastic bags is working well. According to a statement released Tuesday by the Texas Campaign for the Environment, ARR's review found that the ban has dramatically reduced Austin's bag litter and bag waste, while saving money in the recycling process.

McKinney Corporal Eric Casebolt, a 10-year veteran of the MPD, resigned Tuesday after his actions in subduing a group of teenagers at a McKinney pool party – throwing people to the ground and brandishing his gun – were recorded and generated a nationwide backlash (as well as defenses). Casebolt had been placed on administrative leave.

The body found floating in Lady Bird Lake Sunday morning has been identified as recent University of North Texas graduate Julio Santos. KXAN reported Tuesday that the medical examiner found no "suspicious trauma," but the investigation is ongoing. Santos was last seen alive in front of Barbarella after 2am Friday.

Two local affordable housing agencies could soon be broke, according to a county Audit­or's Office report. The Housing Authority of Travis County and the Strategic Housing Finance Corp­or­ation may be insolvent within 15 months as funds dropped more than $2 million from 2012-14, the Austin Monitor reported.

Former Austin state Rep. Glen Maxey, the first openly gay member of the Texas House, offered a wry response to (unmarried) presidential wannabe South Carolina Sen. Lindsey Graham's declaration that – should he be elected president – "I've got a lot of friends – we could have a rotating first lady." Maxey posted to Facebook: "If Lindsey needs a rotating lady, maybe I could apply. I've been grand marshal of the Texas Gay Rodeo ... And I rotate very nicely."