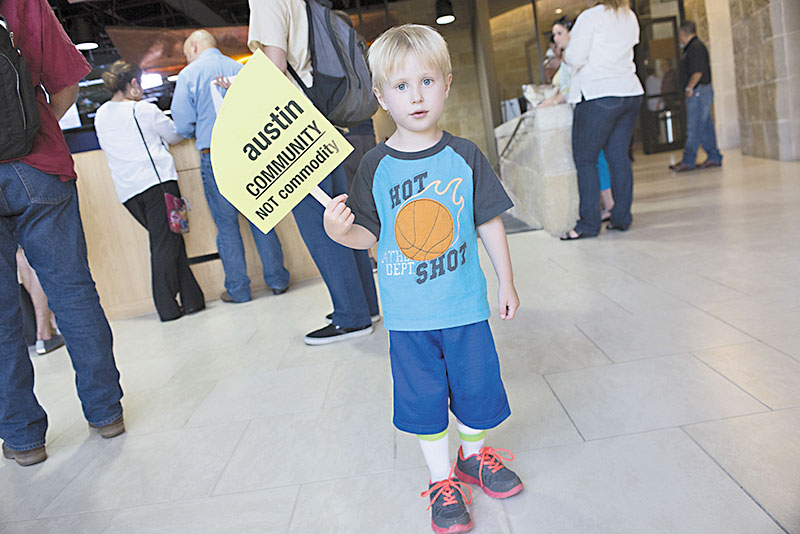 A young protester at the Planning Commission. (Photo by Sandy Carson)

The city's Planning Commission voted 4-1 Tuesday, June 9, against granting a conditional use permit for a pair of would-be hoteliers who hope to build a 65-room, three-story facility in the midst of an established neighborhood.

"The decision by the Planning Commission is a guarded relief to those of us who worked so hard to fight the construction of a hotel on East Cesar Chavez, the aorta of our beloved neighborhood," a weary Alberto Martinez, chair of the East Cesar Chavez Neighborhood Planning Team, said the day after the vote. "We pounded the streets with petitions, we researched, we planned, we gave it our all. But most importantly, we came together – disparate groups that at times fight each other – in a common cause. We came together and we prevailed."

Some 40 community members gathered outside City Hall before the Planning Commission's vote, to protest the development. They waited until midnight to hear the board's decision in a packed agenda where the hotel was the 18th item to be discussed. District 3 Council Member Pio Renteria was among those voicing his disapproval of the hotel plans: "There are many things in our neighborhood that are desperately needed. This hotel is not one of these," he said, noting the increased traffic the hotel would bring on an already-congested East Cesar Chavez. Brian and Bree Carrico, a husband-and-wife team of entrepreneurs, hope to build their hotel at 1207 E. Cesar Chavez – across the street from a daycare center and church. "It will affect the safety of our children," Renteria said. "It is not needed here in our neighborhood, and it's about time we decide we're not going to take it anymore."

It's unclear at press time whether the Carricos will take their proposal to City Council, despite the PC's negative recommendation.

Read an expanded version of this story.

A version of this article appeared in print on June 12, 2015 with the headline: Eastside Hotel Denied at Planning Commission