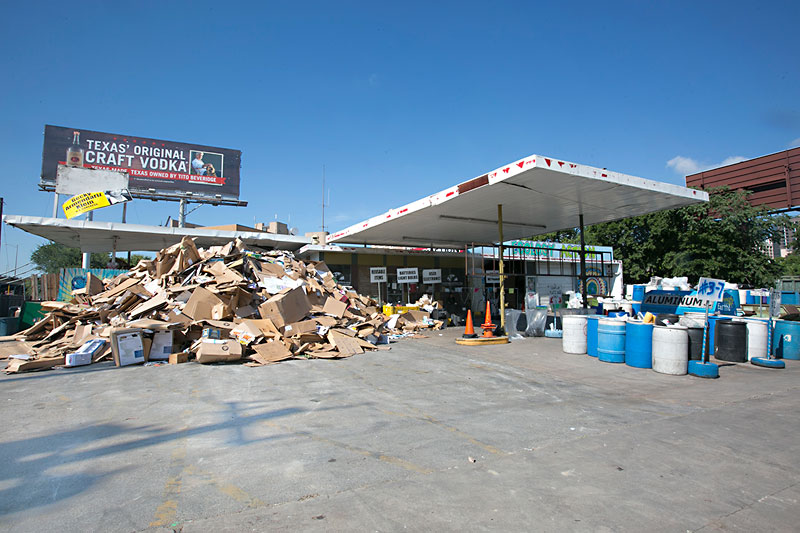 Come September, after 20 years of operations at Ninth Street and the southbound I-35 frontage road, Ecology Action's recycling drop-off center will close its doors. The center has collected lightbulbs, batteries, electronics, Styrofoam, cardboard, and traditional single-stream recyclables from both individual residents and commercial properties.

The decision to close, Executive Director Alden Larrick said, is based on the convergence of two factors: the changing nature of recycling in Austin, and the Downtown real estate market. When the center opened in the mid-Nineties, neither residential curbside single-stream recycling nor the city's Universal Recycling Ordinance existed. Ecology Action offered a convenient place for people to take their household or business recyclables instead of putting them in the trash.

Today, the center still receives large amounts of cardboard and Styrofoam from businesses, as well as household recyclables from Travis County residents who don't have curbside collection service. But the volume, particularly from residential clients, has decreased, as city programs and recycling requirements have expanded. The nonprofit group has been operating under a three-year contract with the city that was initiated in 2009 and extended for an additional three years, ending in May. Its terms provide that the city will reimburse Ecology Action for collecting and processing up to 220 tons of recyclables per month. Lately, the center has been processing a little more than 100 tons per month.

The second factor contributing to the decision is the end of Ecology Action's lease. Its landlord – with whom Larrick emphasizes the group has a positive relationship – has decided to sell the property. Both the city and the landlord have extended their agreements with Ecology Action until the fall, allowing the group to close the center in September and leave by the end of October. Moving the drop-off facility isn't practical, Lar­rick says, both because of the cost to move the equipment (which will be sold to a local recycling processor) and because the beauty of the drop-off site is its central location.

The dwindling drop-off volumes are actually an indication of recycling's widespread adoption in Austin. The advent of curbside single-stream collection has meant people can recycle at home. The Universal Recycling Ordinance, which by October 2017 will require all businesses and multifamily properties to offer recycling, means those buildings will contract with a hauler to pick up materials on-site. Instead of bringing their glass and plastic to the drop-off center, apartment dwellers can just walk to their on-site Dumpster.

"Ultimately we want recycling to be easy," Larrick says. "Our drop-off center is going away partially because recycling in Austin is getting better."

In preparation for the closure, Ecology Action is connecting its larger clients with companies that can accept truckloads of cardboard or Styrofoam. Residential customers can bring batteries, lightbulbs, and electronics to the city's adjoining Household Hazardous Waste and Resource Recovery drop-off sites on Todd Lane in South Austin. That facility will eventually become a one-stop shop accepting the above items plus appliances and bulky items, Styrofoam, and traditional recyclables (glass, plastic, paper). Austin Resource Recovery Director Bob Gedert says his department is working on the details of a contract to help ARR run that facility, and that Ecology Action will be able to bid on that contract. He said he did not anticipate a gap in service between the Ninth Street drop-off center's closure and the expansion of the Todd Lane center. Eventually (ideally within two years, Gedert says) ARR will replicate the Todd Lane center's capacities in a northeast facility.

Whether it continues in the drop-off business or not, Ecology Action, which was founded in 1969, is recalibrating its services to meet the city's current needs. The group, along with the city and the U.S. Business Council for Sustainable Development, runs the Austin Materials Marketplace, an online directory that facilitates exchanges in which the waste produced by one business is used as raw materials by another. Ecology Action serves as a middleman for commercial recycling services, connecting businesses affected by the URO with local recycling haulers. And it will expand its work in brownfield remediation, having nearly completed the transformation of a 9.7-acre former landfill in Montopolis called Circle Acres.

During a recent 30-minute conversation at the drop-off site, Larrick was approached by three different clients concerned about the center's closure. Each proffered a bag of recyclables: toner cartridges, Styrofoam, an ancient and rusted bathroom scale (working, but about 7 pounds optimistic). Nearby, the site's garage was half full of Styrofoam that had piled up while some equipment was out of service. To Larrick, these facts illustrate the public's commitment to recycling, which she expects will remain strong after the center's closure.

"We're sad to see this place go, as everyone is," she says, "but I think that says really good things for the future of recycling in Austin."

A Little Poison With Your Plastic?
Polycarbonate plastic bottles pulled from shelves over health concerns