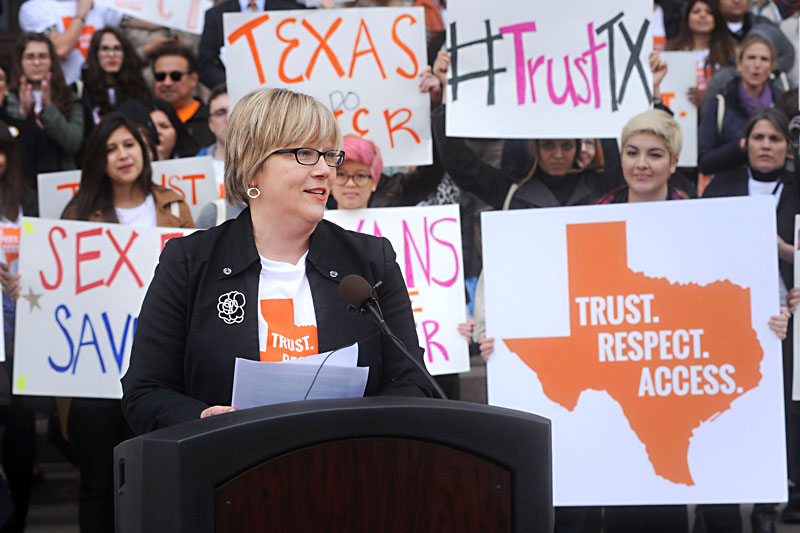 As if the notoriously anti-choice Legislature had anything left to destroy after eviscerating both women's health care funding and abortion access over the past two sessions, they somehow managed to chip away at reproductive rights even further. In their perennial quest to make abortion "a thing of the past" GOP lawmakers this session turned to dramatically restricting abortion access for abused and neglected minors – and they did so without exemptions for survivors of rape or incest.

House Bill 3994 by Rep. Geanie Morrison, R-Vic­toria (sponsored in the Senate by Charles Perry, R-Lubbock) poses hurdles to judicial bypass – the legal process by which a teenager averts parental consent (due to the threat of physical, sexual, or emotional abuse) to undergo abortion by securing permission from a judge. Among other changes, HB 3994 increases the burden of proof of abuse, limits where a minor may obtain the bypass, and extends the time frame in which a judge must rule. While pro-choice Democrats strove to alleviate the increased burden for minors with a series of compassionate and commonsense amendments, Republicans ricocheted each one out of sight. The bill – which is expected to be hit with a lawsuit from opponents – now moves to Gov. Greg Abbott's desk.

Conservative budget writers also succeeded in booting out Planned Parenthood from a breast and cervical cancer screening program, with the explicit intention of hurting the abortion care provider: Even though it keeps its abortion services wholly separate, the thousands of women who have used the provider for livesaving care will now be turned away.

However, there were some bright notes of pro-choice victory: SB 575, which would have banned health insurance plans from covering abortion care, eventually died due to Repub­lican infighting. Likewise, a measure that would have allowed legal representation for fetuses died. Other attempts to erode health care – such as an amendment slipped into an unrelated bill in the 11th hour by Rep. Matt Schaefer, R-Tyler, that would bar women from obtaining abortion in cases of fetal abnormality, and a move from Rep. Stuart Spitzer, R-Kaufman, to divert HIV prevention funds to abstinence education – faltered in the end.

Encapsulating the sexism women of the 84th session saw, Rep. Jessica Farrar, D-Houston, said on the House floor in April, "I won't even go into the level of misogyny I have experienced this session, particularly worse than in any other session."

On the overall health care front, Texas once again failed to make any substantial traction in expanding Medicaid under the Affordable Care Act (despite early rumblings from Abbott), leaving behind an estimated 1 million Texans stuck in the "coverage gap." And plans to consolidate the state's health agencies into one "mega agency" were scaled back after a high-profile contracting scandal plagued the department; under SB 200 three, instead of five, of the state's health-related agencies (the Health and Human Services Commission, and the Departments of Aging and Disability Ser­vices, and Assistive and Rehab­ili­tative Services) are slated to become one by 2017. The bill also creates an advisory committee to offer recommendations on the proposed consolidation of the state's women's health programs.