The latest Lege battles end, but the struggle continues

The dust of the 84th Legislature hasn't quite settled yet, and the flurry of the final days and the governor's signature agenda always tends to leave a few surprises. But you'll be delighted to know at least some folks are happy with the overall outcome – for example, National Rifle Associa­tion legislative spokesman Chris Cox: "Texas gun owners enjoyed several important victories this year."

Cox was referring primarily to the NRA's priority items, "open carry" of firearms and "campus carry" – allowing gun brandishers to display their weaponry in even more variety and in more places. They didn't get precisely what they wanted – which is no restrictions of any kind, and no requirement to produce a handgun license on request of a police officer – but there's plenty of time for NRA fundraising and promotion between now and 2017.

I was actually more amused by the passage of Senate Joint Resolution 22, which (when inevitably endorsed by the voters in November) will "affirm the individual [constitutional] right to hunt and fish" in Texas. The gun pushers, brave as they are, seem to endure quite a few inchoate terrors: the notion that somebody, somewhere, is threatening their "individual right to hunt and fish" is a touching one, akin to a child making sure the closet door is always tightly shut at bedtime.

Although I believe the latest round of expanded gun rights are folly (as I've written before), they're mostly symbolic. The country, and certainly Texas, are already so neck-deep in guns of all kinds – and the popular inclination to use them recklessly – that adding more around the margins will not markedly amplify the recurrent mayhem they enable. And until the folks who say they oppose this nonsense return to voting in larger numbers, there is probably very little to be done about it.

Elsewhere in this issue ("What's the Damage?" June 5), the News staff summarizes in more detail what the legislature did (and did not) accomplish in its five-month Austin residency. One landmark goal the GOP majority finally accomplished was to remove responsibility for public corruption investigations from the jurisdiction of the Travis County District Attorney's Public Integ­rity Unit, moving investigations instead to the Texas Rangers, and prosecutions to home counties – where local prosecutors will no doubt be eager to review the misconduct of their legislative colleagues.

The largest legislative task is of course the state budget, and the leadership is congratulating itself on delivering "tax relief" – including a 25% cut to the business franchise tax, another gargoyle designed to avoid a rational income tax actually based on ability to pay. In voting against the budget, Austin Rep. Donna Howard summarized the public needs it ignored: nearly a third of school districts with less per-pupil funding than before the 2011 cuts; pre-K funding (a Greg Abbott "priority") lower than pre-2011; higher education funding stagnant for a decade – all while the bragging continues over the "Texas Economic Miracle" (which has indeed raised state revenues, especially for the now $11 billion "Rainy Day Fund" that our political leadership refuses to allocate).

"It is neither conservative nor responsible to leave so many critical programs under­funded," said Howard, "when the necessary funds are available – even after considering the proposed tax cuts of $3.8 billion." Beyond the public schools and universities – where it was more important to allow guns than to fund education – add the ideological neglect of health care, as the state continues to refuse federal billions in Medicaid expansion in order to thumb its nose at "Obamacare," and is willing to obstruct women from cancer screenings to take another blow at Planned Parenthood.

It Coulda Been Worse

Conservative and responsible: never were two weasel words more inaptly applied. But no session ends without some accomplishments, often by negation. Although school funding starvation persisted, public school vouchers (still a right-wing priority), failed again, via the perennial alliance of urban Democrats and rural Republicans who support their local schools. A back-door attempt to defund unions by banning payroll dues deduction came to naught, at least in this cycle. And despite a couple dozen ritual attempts at targeting gay Texans (aka "religious freedom"), the zealots were left to lament woefully that the Lege failed to obstruct "the radical agenda of sexual gender confusion."

There were a handful of criminal justice reforms – decriminalizing truancy, some movement toward better review of wrongful convictions. The governor signed a marijuana toehold: approving the use of cannabis oil in certain medical cases. There was less direct attack on reproductive rights – not much left to outlaw – although the shameful new restrictions on judicial bypass for pregnant teens heaps official oppression on top of child abuse. (At least this year they didn't move even more money into "ignorance-only" sex education.)

All in all, it seems a mixed bag, under the recurrent headline, "It Coulda Been Worse." We wait for the state courts to save the public schools, and the U.S. Supreme Court (just maybe) to save national health care. On the representative side of the ledger: Elections have consequences. 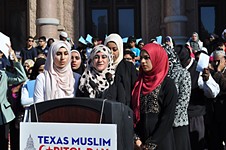