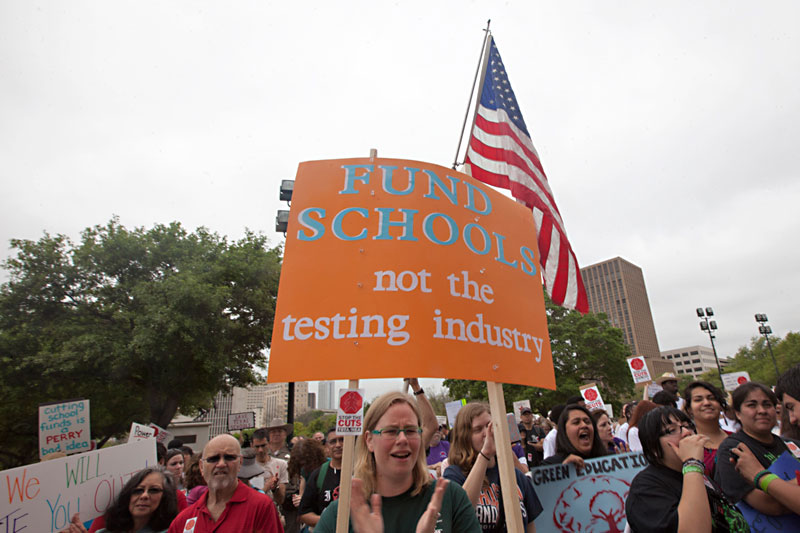 Save Our Schools rally (photo by Jana Birchum)

When it comes to public and higher education, the 84th Legislature will be remembered as much for what it didn't manage to do as what it did.

Put aside for a moment the always pressing issue of money. According to Texas Amer­ican Fed­er­ation of Teachers president Louis Malfaro, there's a chance this session will be remembered for lawmakers turning away from high-stakes assessments. "Early on, there was an agreement that standardized testing has started to outrun its usefulness," said Mal­faro. The biggest indication of that was the signing by Gov. Greg Abbott of Senate Bill 149, authored by Sen. Kel Seliger, R-Amaril­l­o. The graduation committees it creates will allow talented students to graduate high school, even if they have not passed all five end-of-course exams. Then there's House Bill 473 by Rep. Dan Hub­er­ty, R-Kingwood: A former school board member himself, Huberty wrote a reform requiring standardized tests to be designed to be completed in an appropriate amount of time by the majority of students.

Meanwhile, however, there is also new emphasis on assessment of school districts. Under HB 2804 by House Committee Chair Jimmie Don Aycock, R-Killeen, all ISDs and CISDS will be graded on an A-F scale. Mal­faro called that policy a failure before it came to Texas, noting, "The few states that have passed this thing are rolling it back or revising it, because they realize that it's an incredibly inaccurate way to monitor a school full of kids."

But it's what didn't pass that may matter most. On the positive side, Malfaro said, "Vouchers didn't pass. Tax credits didn't pass. Virtual vouchers, these online learning bills that would throw education online and bring on companies like K12 Inc. that have had awful results, didn't pass." On the negative side, Malfaro said it was "disappointing" that Travis County Democrat Eddie Rodri­guez's community schools bill, HB 1891 (see "Bill of the Week," March 6), was held hostage by Lt. Gov. Dan Patrick, "even though it passed the House with bipartisan support." Malfaro said he heard representatives of pro-charter pressure group Texans for Education Reform boasting that, even though they got nothing passed, at least this measure to get families and charities more involved with campuses failed. "What a twisted thing to say."

And then, of course, there is the money. There was a little extra cash: $1.5 billion over inflation and population growth, an extra $130 million for half-day pre-K. Yet none of that comes close to filling the hole left by a $5.4 billion cut in 2011. That's a situation repeated in higher education, where there was no tuition relief, and counties shoulder an ever-growing share of community college funding. They will become even more dependent on adjunct staff, and pay them salaries that make "a public school teacher's wages look princely," said Malfaro. He expressed particular frustration that lawmakers prioritized tax cuts over investment in the future workforce "at a time when corporate profits are at an all-time high." He said, "We have all these kids and all this money. It doesn't take a genius to work this out."