Open carry and campus carry dominated, but there were other smaller policy shifts, as well. 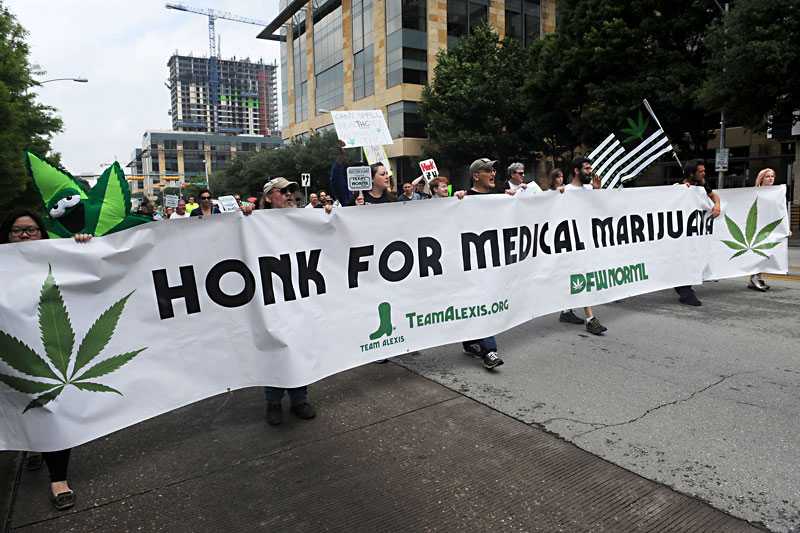 The tone for new marijuana initiatives was set March 2014, when Tea Party favorite Rep. David Simpson, R-Longview, declared support for "deregulating" it. "I recognize the innate goodness of everything God made and humanity's charge to be stewards of the same," he said, in an op-ed for the Texas Tribune. "I don't believe that when God made marijuana he made a mistake that government needs to fix." So launched the most encouraging fight for legalization this state has seen. Simpson's proposal was one part; Rep. Joe Moody, D-El Paso, made a valiant effort to cut down on possession penalties. And Rep. Marisa Márquez, D-El Paso, and Rep. Tan Parker, R-Flower Mound, shifted their attention toward the plant's medical benefits. Their two bills were abandoned in committee, however, and Moody and Simp­son's efforts were left hanging in Calendars.

The marijuana-related bill that did make its way to law isn't much of a traditional marijuana bill. SB 339, authored by Rep. Kevin Elfite, R-Tyler, allows cultivation of cannabis throughout the state, but only if the plant produces an extremely low amount of THC. The goal is to produce cannabidiol, a chemical that provides legitimate relief to those with epilepsy. While many say the bill is unworkable and too narrowly focused, those whose lives are affected by epileptic seizures welcome the advancement. 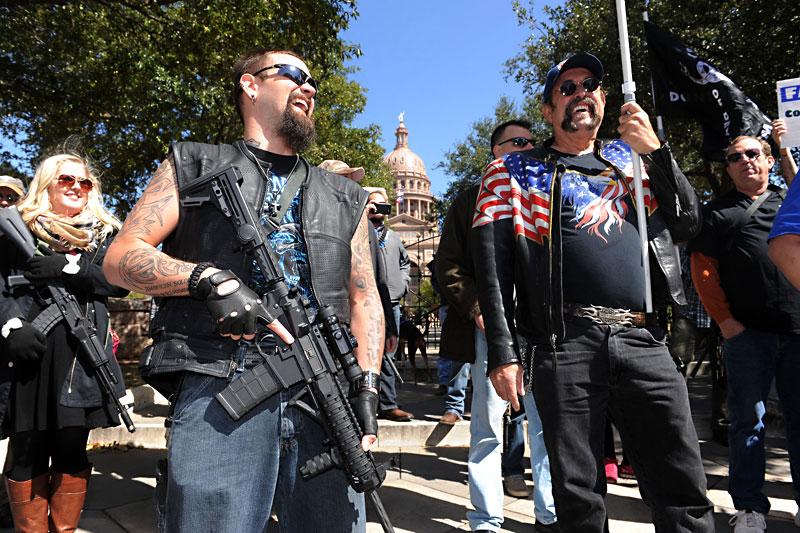 Open carry activists at the Capitol in January

Gun nuts entered with two key initiatives: open carry and campus carry. The first allows anyone with a concealed handgun license to wear their handgun out in the open (as is already allowed for long guns). The second would allow those with CHLs to bring guns onto college campuses. Open carry passed the Capitol's two chambers, though not without debate. Things became especially heated on the Senate floor when Sen. Don Huffines, R-Dallas, re-introduced a once-rejected amendment that would prohibit police officers from stopping someone solely to ask if they have a CHL. Opposed by law enforcement, the addition was eventually scrapped by lawmakers. Campus carry's journey to the governor's desk faced more resistance. Efforts from opponents just before deadline to delay its passage through the House on second reading were ultimately unsuccessful, but amendments filed (to provide limited local control to universities and allow private colleges to opt out altogether) helped move it to Abbott's desk. He said before the session that he'd sign any open carry bill into law.

Rep. Ruth Jones McClendon, D-San Anton­io, and Sen. Rodney Ellis, D-Houston, via HB 48, helped lay the framework for the Tim Cole Exoneration Review Commis­sion, which will study wrongful convictions. Ellis was also instrumental in passing HB 638, authored by Rep. Rafael Anchia, D-Dal­las, which will allow the wrongfully convicted to defer portions of their annuity payments in order to extend those payments to a designated beneficiary upon death. Elsewhere, legislators approved SB 135, a bill that will eliminate "pick-a-pal" selection on grand juries (to be replaced with random selection from the same pool as trial juries). Smaller but important policy shifts came in the form of HB 710, which centers around the issuance of court summons rather than an arrest warrant for certain parole violations; and HB 1363, which will allow some offenders to participate in a prostitution prevention program. HB 225, which would have barred police from arresting any drug user who calls 911 for another user who's overdosed, was vetoed by Gov. Abbott on Tuesday. Meanwhile, final decisions on Sen. John Whit­mire's SB 1630, to provide family-centric provisions to incarcerated juveniles, went down to the wire this weekend, finally passing both chambers.

Countering all that, a bill authored by Sen. Joan Huffman, R-Houston, made its way to the governor on May 20 that will make information about everybody who participates in the execution procedure – manufacturers, suppliers, transporters, and administrators – confidential and unavailable though public records. And Sen. Ellis' SB 226, which attempted to bar the death penalty for those with intellectual disabilities, was left hanging in committee back in January.