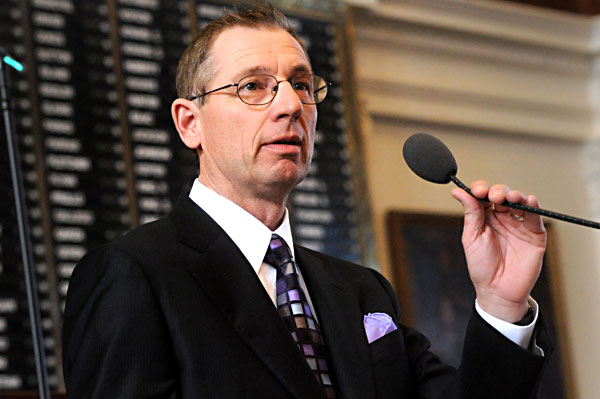 Was there a more resonant visual metaphor this week than the Texas House last Monday? As much of the state endured deadly storms, the lower chamber closed the wooden blinds to the outside world, and kept working on their agenda. Even though the budget is still in flux, there was no discussion of infrastructure investment or emergency funding for the thousands of residents. Instead, the Legislature moved on with its same agenda of guns and abortion restrictions.

That said, this session continues to hold up as the worst on record, with continuing capitulation from the House to the Senate, and to radical conservative demands. The Senate got its way on tax cuts, with a raise to the homestead exemption designed to appeal to Lt. Gov. Dan Patrick's middle-class primary voters. That's despite House Ways & Means Chair Dennis Bonnen, R-Angleton, repeatedly pointing out that what minimal benefit homeowners see will evaporate after one year. Then the House agreed to fast-track campus carry for the Senate without the local option that would allow state universities to stay gun-free – the one concession that gun control groups hoped for (as one lobbyist put it, "At least put some lipstick on this pig.")

Talking of the guns-for-everyone crowd, chamber security had to intervene when Rep. Jonathan Stickland, R-Bedford, almost got into a fistfight with State Affairs Committee Chair Byron Cook, R-Corsicana, after the Calendars Committee, on which Cook also sits, refused to put the abortion insurance restrictions in Senate Bill 575 up for debate. Three GOP women (Reps. Sarah Davis, Patricia Harless, and Debbie Riddle) sided with Dems – the latter reversing her vote after Cook reconvened the committee without six of the seven members who voted nay, steamrolling the measure through to debate.

In all this, the Democrats seemed utterly ineffectual, with infighting about how often members had been absent during important and winnable votes. But when Tuesday rolled around, they mustered some intestinal fortitude. Raising every able body (including Rep. Dawnna Dukes, D-Austin, who is dealing with serious back issues and turned up in a neck brace), they seemed set to run the clock until midnight – the deadline for getting Senate bills past second reading. They helped Republicans load up omnibus ethics reform bill SB 19 with multiple amendments, extending debate so long that SB 575 never got that second reading Stickland had demanded. However, many progressives are fuming that they folded on SB 11's campus carry, with only limited opt-out powers for individual state schools as a concession. The Tea Party rump may have had enough votes to call the question, but Dems withdrew their remaining 100 amendments without a fight, allowing quick passage.

The Tea Party wrecking crew responded with vindictiveness to the failure of SB 575. The next morning, they launched into what is being called the Wednesday Morning Massacre – pulling both Democrat and Republican bills off the Local calendar and sending them to the same trash pile as SB 575.

Bills of the Week: Where Are They Now?

There have been 4,340 House bills and resolutions filed this session, and 2,136 from the Senate side. Luckily, they can't all pass: In fact, as of May 19, only 180 bills had been sent to Gov. Greg Abbott, and he'd signed only 45. With the end of the session imminent, let's look back at the fates of some of our previous "Bills of the Week."

• HB 11 by Rep. Bonnen: The budget will have about $800 million for border security, but Bonnen's bill will overhaul a slate of operational issues, not least keeping the Texas National Guard at the border until the DPS has enough personnel there to take over all patrols – a date no one seems to know. With the Senate poised to approve it, this bill could effectively place the state's armed forces on permanent patrol.

• HB 942 by Rep. Kyle Kacal, R-Bryan: Remember the West explosion? And remember the political hand-wringing about how something must be done about ammonium nitrate storage? Well, astoundingly, there was a little action. Sadly, Austin Rep. Eddie Rod­ri­guez's HB 2470 to increase insurance requirements died in committee. But at least HB 942, strengthening the inspection powers of fire marshals, is now on its way to the governor.

• HB 839 by Rep. Elliot Naishtat, D-Austin: For years, kids leaving juvenile corrections have faced a silly and pointless gap in CHIP and Medicaid coverage. The master of the simple and effective fix, Naishtat's bill passed the Senate on May 27.

• HB 1785 by Rep. Harold Dutton, D-Hous­ton: Texas hates taxes, but does love taxing sin, so this proposal to cut the $5 per person entrance fee on strip joints to $2 never got a hearing. Now the comptroller's office is aggressively cracking down on businesses that didn't pay while the law was being challenged, and several pieces of legislation are targeting sexually oriented businesses for their alleged involvement in human trafficking.

• HB 1800 by Rep. Armando Walle, D-Hous­ton: Rule No. 1: Never write statewide legislation to solve a local problem. Feral dogs were scaring and attacking residents of one neighborhood in Walle's district, but it was in an animal control jurisdictional limbo. So he drafted an overly broad definition of "dangerous" and "nuisance" dogs that, luckily, was put to sleep without a committee vote.

• HB 1901 by Rep. Matt Krause, R-Fort Worth: A "pro-life" bill too mean-spirited even for Texas lawmakers? It seems so. This measure appointing a lawyer for a fetus when the mother is on life support and even brain-dead fortunately never made it to committee.

• HB 2474 by Rep. J.D. Sheffield, R-Gates­ville: One of a handful of bills designed to improve vaccination record keeping, it managed to evade the wrath of the anti-vaxxers long enough to escape the House, but died for lack of debate in the Senate Health & Human Services Committee.

• HB 2918 by Rep. Jason Villalba, D-Dallas: Talk about politically tone-deaf – as the nation discussed how pivotal amateur footage of police violence has been in securing arrests, Villalba suggested criminalizing that footage. Amid public outcry, he quietly withdrew it.

• HB 3561 by Rep. Rodriguez: Call it what it is – the Jumpolin bill. After the now-nationally infamous demolition of an East Austin piñata store, Rodriguez called for high damages against landlords who illegally eject renters. It was always more a political statement than a realistic aspiration (but then, how true is that of most bills?) and the House rejected it 61-77.

• HB 80 by Rep. Tom Craddick, R-Midland: Former Speaker Craddick has spent years trying to get a texting-while-driving ban on the books, and last session it took a governor's veto to kill his safety measure. This time, blame the Senate: After nearly two weeks on their Intent Calendar, this seems to have hit a permanent red light.

Sine die will be on Monday, June 1, this year, and the consensus is that it cannot come fast enough... The budget came closer to final passage, with the conference committee striking a $2.5 billion transport compromise... Texas DPS has publicly apologized for handing Stickland a tape of their interview with Rep. Joe Pickett, relating to accusations that Stickland's office faked witness sign-ups before Pickett's House Transportation Committee (see "Lege Lines," May 7)... Bad news for American Phoenix Foundation, the group that has been stalking lawmakers and covertly recording them. Conservative news outlet Breitbart handed the tapes back and will not publish them; donor and oil billionaire Jeff Sandefer has asked for his money back, saying he was "unhappy" with the group; and now its leadership is faced with legal action if they don't release its tax filings. 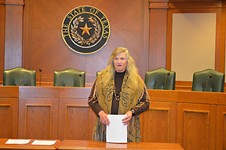 Gay Place
The largest transgender survey ever conducted is out, and the results reflect many hardships