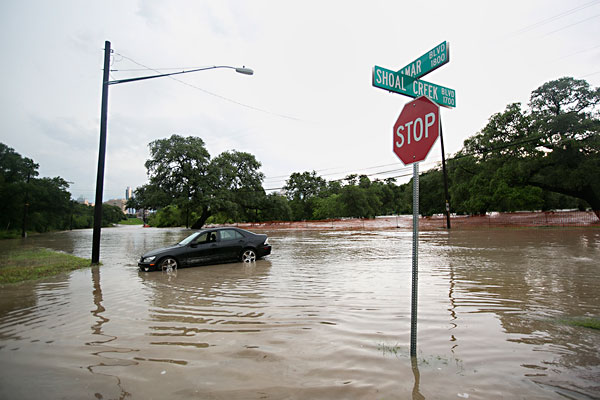 "Texas weather can be cruel" – Nina Hernandez, "Flood of Memories," May 25. Every Austinite, and seemingly every Texan, is exchanging flood tales this week, some of close calls and others of real disasters. See "Flood of Relief" for updates on events and local aid resources.

City Council meets today (May 28) with a couple of major decisions looming: today, whether to proceed with a challenge to commercial property evaluations by the Travis Central Appraisal District, and next week, whether and how much to adjust the homestead property tax exemption. See "Council: You Know You Better Finally Decide," May 29.

Anthony Snipes, the assistant city manager responsible for recruiting a couple of guest speakers to explain The Curious Ways of Women to city staffers, walked the plank this week, as City Manager Marc Ott accepted Snipes' resignation, effective in August. Snipes will spend the interim transferring his workload to other city staff. See "Asst. City Manager Placed on Leave," May 15.

APD officer Albert Arevalo, 37, got popped for a DWI Monday after he got pulled over for doing 91mph on MoPac and blew a .178 and a .163. He told arresting officers that he spent the night drinking six gin and tonics at three bars Downtown. Last April, APD Chief Art Acevedo issued a crackdown against officers drinking and driving, saying that first-time offenders are likely to be terminated.

UT students might not want to pick out a concealed carry holster just yet: The House pushed through campus carry before Tuesday's midnight deadline, but, at press time, the bill – which differs significantly from the Senate's version – was still awaiting final approval. See "Lege Lines," May 29.

Guardians of those living at the Austin State Supported Living Center saw their first win this weekend when the House passed a bill, originally meant to close the historic home for residents with intellectual and developmental disabilities by 2017, that included a provision preventing its closure (see "House Delays Closure of Austin SSLC," May 23). The updated bill still needs approval from a conference committee before the session ends.