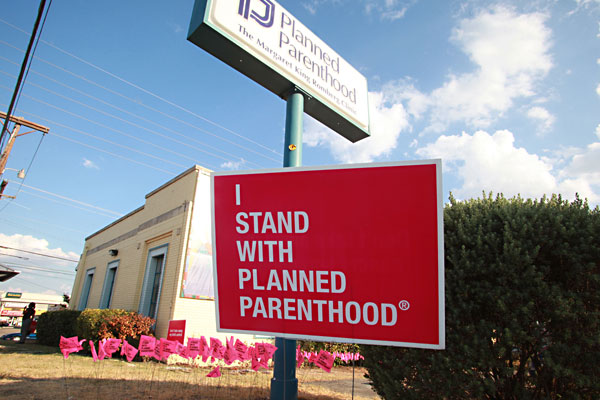 Low-income, insured women would no longer be able to turn to Planned Parenthood for state-supported breast and cervical cancer screenings, under a recently negotiated state budget compromise.

The Senate first proposed tiering the Breast and Cervical Cancer Services (BCCS) program funding in a way that would force Planned Parenthood to the back of the line by prioritizing other providers first when doling out funds, as the Chronicle previously reported (see "Defund Planned Parenthood ... Jeopardize Lives," Feb. 13). Smaller clinics unaffiliated with abortion care, like the San Marcos-based Community Action Inc. of Central Texas, would have also been hit hard under the original plan – the new budget at least spares these providers. But while the initial priority funding plan was scrapped, the House and Senate Budget Conference Committee has instead picked another route that leads to the same place.

The updated language removes Planned Parenthood from the program by stipulating that providers must be eligible for the Texas Women's Health Pro­gram – a strategic way to ensure the health network doesn't receive those funds. That's because three years ago, in an all-too-familiar move, Texas booted out Planned Parenthood from the Medicaid-based WHP, which offers preventative services including cancer screenings and contraception – leading to the immediate exclusion of some 50,000 low-income, uninsured women, and causing the state to give up around $30 million in federal state-matching grants. Since the PP exclusion, thousands fewer women receive care through the new health program. A report released this year by the Texas Health and Human Ser­vices Com­mission found that 30,000 fewer women received health care from the program in 2013 than in 2011.

"What we have seen in recent studies is what we know to be true: When Planned Par­enthood is cut out of a provider network, a significant number of Texas women lose access to care," said Yvonne Gutierrez of Planned Parenthood Texas Votes. "This decision will mean fewer women will be able to detect and treat their cancer early. The Texas Legislature has, without shame, put the lives of Texas women at risk."

The Lege's agreed-upon budget does what Senate budget writers intended from the outset. "There are many members that feel very strongly that the facilities that receive that funding should not be facilities that are performing abortions, so the answer is: Don't perform abortions and you get the money," chair of the Senate Committee on Finance, Sen. Jane Nelson, R-Flower Mound, told reporters in January, when the first plan was introduced.

The BCCS program aims to assist uninsured women over 18 years of age who earn income up to 200% of the federal poverty level – offering clinical breast exams, mammograms, pelvic and HPV exams, biopsies, and Pap tests to prevent and detect cancer in its earliest stages. Texas has among the country's highest incidence and mortality rates of cervical cancer, according to the CDC. Planned Parenthood serves about 10% of all program clients a year, and, serving some 45,000 women over its two-decades-long history, has been instrumental in preventing advanced stages of cancer for program participants. Patients say that without the BCCS program they might not be alive today. More than 15,000 women signed a petition calling on the Legislature to keep the trusted provider in the program, but that has apparently fallen on deaf ears.

"Once again, Texas legislators have ignored their constituents and jeopardized the lives of Texas women," said Gutierrez. "We will fight this shameful attack, and we will never back down from our mission to provide Texans the quality affordable care they need."

A finalized budget is expected to be hashed on before June 1.