Proposals before Council suggest change is in the air

Take a look at today's City Council agenda, and you might groan at first: Decker Lake Golf? Homestead exemptions? Haven't we been here before?

But take a closer look: It's springtime ... do we see, in fact, seeds of change starting to sprout?

Take taxes first: Council will debate the homestead exemption, yes, but they'll also mull a much more far-reaching proposal: filing a broad appeal against the Travis Central Appraisal District's commercial property valuations in general, which everyone agrees are ridiculously low compared to residential valuations. A new study of commercial appraisals (see Point Austin, p.10), suggests that more equitable valuations could allow for lower tax rates from all the taxing entities, and save $218 for the average homeowner – about four times as much as the homestead exemption Council is separately considering – and likely much more for homeowners inside the Austin school district. How that appeal would be met – and fought by large landowners – is an open question. But hey, it's a start.

Meanwhile, the Decker Lake golf proposal comes back to Council with a lot different spin than when it went off to the committees for further study. The Economic Oppor­tun­ity Committee, in particular, came back with some very specific recommendations for staff and the full Council to consider: First, take a step back and look at all options, rather than simply weighing the proposal on the table against the status quo.

Meanwhile, too, the American-Statesman has editorialized heavily against alienating the parkland without the public vote that move would seem to require, and even City Manager Marc Ott has now proposed that the Council put a lease or sale of the property to a citywide vote. From his April 29 memo to Council: "While we have a variety of license agreements for the use of parkland, I have to acknowledge that none of them may approach the scale of the one currently in front of you for consideration. With that in mind, giving our residents an opportunity to directly vote to either sell or lease the land may be an equally viable option."

Council won't likely call that vote, of course; but what they will likely do is direct city staff, and the involved stakeholders, and their own committees, to take a fresh look at this offer, and at economic incentives in general. As CM Greg Casar put it: "On getting the figures from real estate on more or less how many chips we have on our side, I think that it does make sense to take a look at what we can really ask for in return if we were to move forward on this deal." That may seem elementary, but it hasn't at all been standard operating procedure when city staff considers economic incentives. So it's great that we've at least gotten that far.

As I suggested a few weeks ago: Perhaps this is the way the committee system was supposed to work.

Speaking of which, this is that extra-busy week City Council has at the end of each month – compressed because of Memorial Day into six meetings in three days:

9am Wed., May 27: Audit and Finance Committee

This Monday, May 25, is Memorial Day; most government offices and city facilities are closed (as are the Chronicle offices), but trash pickup and other such services remain unchanged. Many Downtown roads will be closed for the Life Time Tri Cap Tex; see www.austin texas.gov/citystage for a complete list. But the Austin Animal Center will be open normal hours, 11am-7pm.

The Austin Humane Society has a Memorial Day adoption special going through May 25: free adoptions for veterans and active-duty military, while the general public can take home adult dogs at 50% off and adult cats for free. 124 W. Anderson Ln.

The annual ENERGY STAR® Sales Tax Holiday is this weekend: Sat.-Mon., May 23-25: Pay no sales tax on qualified air conditioners, refrigerators, ceiling fans, fluorescent light bulbs, dishwashers, clothes washers, and more. See details at www.comptroller.texas.gov/taxinfo/taxpubs/tx96_1331. The biggest savers: compact fluorescent light bulbs can save about 80% of the energy used by conventional incandescents; ceiling fans can save 60% on your energy bill, and an efficient clothes washer can use 25% less energy, and 40% less water.... Also, Austin Energy offers rebates of $50 up to $1,600 on various energy-efficient appliances and measures. Info at www.powersaver.austinenergy.com. 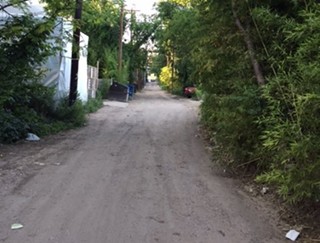 A view of Rainey Alley

The Rainey Alley Project is a city initiative, funded by the developer of the Millennium Apartments, to repave the Rainey Alley, and turn it into "an activated public space while still preserving core alley services." Come see what that could look like, on Tuesday, May 26, 5-7pm at the Mexican American Cultural Center. Volunteer designers will share their creative responses to what they've heard so far, and seek your feedback.

Send gossip, dirt, innuendo, rumors, and other useful grist to nbarbaro at austinchronicle.com.
A version of this article appeared in print on May 22, 2015 with the headline: Golf and Taxes

Council: And the Nominees Are ...
Council considers MoPac extension, and Zimmerman's nominees