Third time not a charm for foreign law ban in Texas 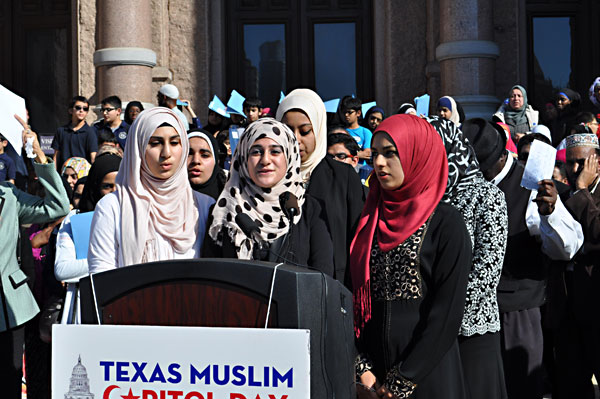 The 84th session of the Texas Legislature, which wraps up at the end of this month, has not lacked for anti-Muslim sentiment. Anti-Sharia law House Bill 562, filed by Rep. Jeff Leach, R-Plano, passed out of committee in April (but didn't see a House floor vote), while Rep. Molly White, R-Belton, generated national headlines in January for her unwelcoming attitude toward Muslim visitors at the Capitol (see "Rep. Molly White Not Quite Sure Who's an American," Jan. 29).

White's notorious Facebook post – instructing her staff to "ask representatives from the Muslim community to renounce Islamic terrorist groups and publicly announce allegiance to America and our laws" – was in response to Texas Muslim Capitol Day, which had been organized by Texan Muslims and their allies to educate legislators about Islam.

White is not alone among public officials in using social media to inveigh against Muslims. Reacting to what had been described by media as "the first Sharia tribunal in Texas and the U.S.," Irving Mayor Beth Van Duyne wrote on Facebook, "Sharia Law Court was NOT approved or enacted by the City of Irving. Recently, there have been rumors suggesting that the City of Irving has somehow condoned, approved or enacted the implementation of a Sharia Law Court in our City ... I will not stand idle and will fight with every fiber of my being against this action. Our nation cannot be so overly sensitive in defending other cultures that we stop protecting our own. The American Constitution and our guaranteed rights reign supreme in our nation and may that ever be the case."

The Sharia tribunal in Irving is led by four imams who use Sharia to mediate disputes in family and business matters. "The misconception about what they see through the media is that Sharia means cut the head, chop the heads, cut the hands – and we are not doing that," Tribunal Judge Imam Moujahed Bakhach said. "We are not here to invade the White House or invade Austin," CBS 11 News reported.

Despite the reactions to the Sharia tribunal in Irving, Catholic and Jewish tribunals already exist without much controversy in the U.S. For instance, the Beth Din ("House of Judgment" in Hebrew) of America was founded in 1960 in the U.S. by the Rabbinical Council of America. "Firmly anchored in the principles of halacha (Jewish law)," according to its website, Beth Din serves the Jewish community of North America as a forum for obtaining Jewish divorces; confirming personal statuses; and adjudicating commercial disputes stemming from divorce, business, and community issues.

Mustafaa Carroll, the executive director of the Houston chapter of Council on American-Islamic Relations, explains that participation in any religious tribunal in the U.S. is voluntary, and participants can turn to U.S. courts if they're not satisfied with the religious tribunal's legal advice. He believes the existence of a Sharia tribunal is important for the Muslim community, explaining that one cannot separate Sharia from the life of a practicing Muslim. "Sharia is getting married, getting buried, it is the Islamic principles that Muslims live by," Carroll says.

HB 562, for which Mayor Van Duyne was a strong advocate, doesn't mention any religion by name, but bans judges from violating the U.S. or Texas constitution by using foreign laws to rule on family law cases.

In 2011, Rep. Leo Berman, R-Tyler, was the first to introduce anti-Sharia legislation in Texas – not because he deemed it harmful, but because he "heard it on a radio station on my way in to the Capitol" that Sharia law is accepted in Dearborn, Michigan. "Isn't that true?" Think Progress reported him asking. And in 2013, John Carona, R-Dallas, also proposed legislation that would prohibit Texas judges from applying or ceding to foreign laws.

The anti-Sharia legislation in Texas is part of a nationwide anti-Sharia movement orchestrated by lawyer David Yerushalmi of New York, an orthodox Jew who rallies against Muslims, Jews who don't share his beliefs, and other minorities. Yerushalmi has drafted model anti-Sharia legislation, and has stated that "the Muslim who embraces traditional Islam but wants a peaceful coexistence with the West, is effectively non-existent," according to the Southern Poverty Law Center.

Realizing it's unconstitutional to single out a certain religion, the anti-Sharia legislators have tweaked their bills to ban the consideration of all religious or foreign laws, Carroll says.

There are complications, however. Amer­i­can state courts often draw upon foreign law in situations related to contract disputes where the parties have designated the law of another country as controlling, and in cases where a marriage or custody arrangement settled in another country are questioned. State courts usually apply foreign law, "provided it does not violate U.S. public policy," according to "Foreign Law Bans," a report published by the Center for Amer­ican Progress. State courts, for example, "will not recognize polygamous marriages, which are permitted in some Muslim countries, and most of them will not recognize marriages between same-sex couples, which are permitted in many European countries."

The report goes on to say, "While certain versions of Sharia are undoubtedly inimical to American constitutional values, treating these versions as the only authentic understanding of Islam – the religion of more than a billion people around the world – both ignores the diversity of interpretations of Islam and casts suspicion on all Muslims."

Because foreign law bans create legal uncertainties, various religious groups and corporate interests have lobbied against them. The American Bar Association has passed a resolution objecting to the bans.

"Supporters of anti-foreign laws fail to acknowledge that American courts are already required to adhere to U.S. law. Anti-foreign legislation infringes on the constitutionally protected right to choose Islamic marriage contracts, implement Islamic wills or to be buried according to one's religious beliefs," CAIR wrote in a letter to the Texas House of Representatives this year.

The utmost risk of foreign law bans is that they will upend the lives of Americans who have entered into family arrangements overseas. According to the Foreign Law Bans report, "In personal and family matters, foreign law bans could call into question the validity of existing wills, adoption papers, and child custody agreements that are arranged according to religious or foreign law principles." Additionally, "Christians, Jews, and Muslims who have agreed to arbitrate personal and family disputes before faith-based tribunals may also find their agreements and awards in jeopardy."

With time running out for the 84th session, it's unlikely that Leach's bill will get tacked on as an amendment or see renewed life. However, if experience is a guide, Texans can expect the issue to pop up again during the 85th session. 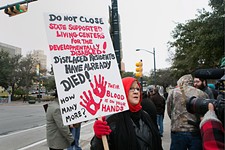 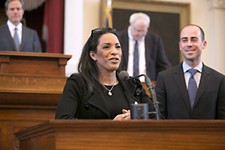