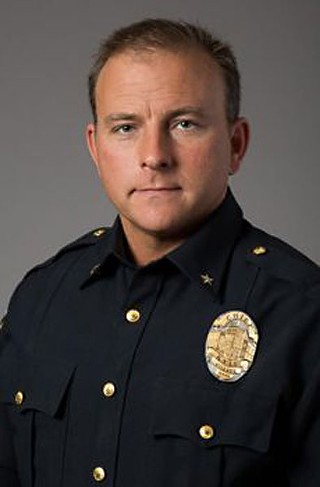 Officials from the south Austin suburb offered publicly that Barnett's removal relates to an internal investigation of KPD Sergeant Jesse Espinoza – Kyle police association president and nine-year KPD veteran – whom Barnett placed on administrative leave in February. However, many believe the reasons for Barnett's departure go deeper. Barnett and Espinoza have a history of discord, dating back to Espinoza's support of APD supervisor and Kyle resident Joseph Muñoz for KPD chief over Barnett, who was offered the job in May 2011. Furthermore, Espinoza has in recent years befriended Louisiana anesthesiologist Dr. Glen Hurl­ston. The two have vacationed together – reportedly going to San Antonio and Florida with their families. In Oct. 2013, after Espi­noza had established an online fundraising campaign, Hurlston donated $5,000 to help pay for Espinoza's son's cancer treatment.

It's that donation that ended up getting Espinoza in trouble with Barnett. The chief has an even longer history with Hurlston, and suspected that Hurlston was paying Espinoza – donating money to his son's since-successful surgery – in exchange for dirt on Barnett's schedule and personal life. (Both Hurlston and Espinoza have denied this, and say Barnett has failed to come forth with related evidence.)

It's reasonable for Barnett to believe that an anesthesiologist in Louisiana would want to obtain personal information about the police chief in Kyle, Texas, because Bar­nett spent approximately six years having an affair with Hurlston's now ex-wife, Suzanne Besse, while Barnett was the police chief in Princeton, a town of just over 6,000 people outside Dallas. Barnett and Besse have a child together: Gerard Jeffrey Blake Hurlston, born while Hurl­ston and Besse were still married – is actually the biological son of Barnett, whose full name is Jeffrey Blake Barnett. Hurlston learned of this in Jan. 2012, two weeks after being arrested on New Year's Day by Princeton police after Besse reported that he had strangled her. Hurlston went to jail for a felony domestic abuse charge for which he eventually pled no contest (after it was reduced to a Class A misdemeanor). Barnett had already split Princeton by then; he announced his resignation on Jan. 27, 2011, under the pretense that he was leaving to focus on completing his Ph.D. By May, however, he was in the process of becoming KPD chief. Hurlston believes Barnett orchestrated his New Year's arrest. (Hurlston was later arrested a second time that year, in June, for charges stemming from a January incident of excessively calling and texting Besse, which violated an emergency protective order. Charges in that case were eventually dropped.)

In Dec. 2013, Hurlston filed a lawsuit against Barnett, Princeton Police Lieutenant Robert Mitchnik, other unnamed Prince­ton police officers, and the cities of Kyle and Princeton, that alleged a string of "unlawful police actions" resulting in "significant and severe emotional distress; physical pain and suffering; emotion pain and distress; loss of income; and other damages." The city of Kyle maintains that it has no involvement in the case. However, the city has been unsuccessful in three separate motions to dismiss the charges against it. Both Barnett and Mitchnik were unsuccessful in their June 2014 attempts to have the case dismissed, as well. In a May 11 motion for summary judgment filed by Barnett, his attorneys argued that Hurlston's "belief comes not from facts, but [his] spiteful desire to make someone, anyone, pay for his hurt feelings and embarrassment," and denied that Barnett or Mitchnik had any involvement with Hurlston's arrest.

Last month, while reviewing documents obtained through the discovery portion of the suit's proceedings, Hurlston came upon a 60-plus page Texas Department of Public Safety Intelligence and Counter­terrorism Division report requested by DPS Ranger Jimmy Schroeder that contained more information about Hurlston than he would like to have be public, including information about past girlfriends and employers, the cars and properties he's owned, "possible relatives," and the phone numbers of old and current neighbors.

Multiple law enforcement sources told the Chronicle that a Texas police officer may only execute such a report if the individual being reported on is either a terroristic threat or has made a threat against a peace officer.

Hurlston's file indicates the latter, and attorneys for Barnett told the Chronicle that their client "received warnings from multiple sources that Glen Hurlston was gathering information about where Chief Barnett lived" and "made verbal threats that he was going to kill or physically harm" Chief Barnett. Hurlston, however, dismissed those accusations as "a complete and utter lie." His attorney elaborated, saying that the only threat Hurlston made was telling Barnett he'd eventually lose his job because he repeatedly slept with Hurlston's wife.

A judge has yet to rule on motions for a gag order filed by both Mitchnik and Barnett, who, along with the other defendants in the case, are hoping for summary judgment in their favor. Barnett awaits the possibility of return to active duty. Espinoza's been told not to speak with the media during his investigation, but surely must be left to wonder how he got tied into this mess to begin with. Who Killed Jim and Tina?
A double homicide in Kyle, Texas, goes unsolved