Following community backlash, city officials have reversed an earlier decision to close the Metz Neighborhood Pool on the city's Eastside for the summer. Officials announced Tuesday that they believe the pools can be repaired and opened for summer.

The controversy over the announced closure reached its high-water mark on the evening of April 29, when Eastside residents spontaneously gathered at the Metz pool to decry the city's decision to close it for the summer due to leaks – one of only two pools slated for the action, along with the Olympic-sized Mabel Davis Municipal Pool in Southeast Austin. A handful of residents expressed skepticism about purported water loss due to leaks, positing the city's move as yet another unfair action targeting the Eastside – already besieged by gentrification-fueled property rates changing the landscape of their community.

In announcing the closures, city officials stressed their decision was based on water loss in a time of drought. At a prior meeting of the City Council's Open Space Committee, officials released a Parks and Recreation Department report that found city pools leaked water at a rate of 256,000 gallons a day last year, with Metz and Mabel Davis accounting for more than 30% of the total.

Leaks notwithstanding, the city now appears to be giving the pools a reprieve from closure: "The Department is still considering operational options for Metz and Mabel Davis Pool," Cheryl Bolin, PARD division manager of Aquatics & Athletics, wrote in response to the Chronicle's questions. "Additional leak detection work is being completed at this time. The results of this work are expected in the near future." At a community meeting held May 7, the 150 residents who signed in were told the results of that study could come as early as Wednesday. Bertha Delgado, president of the East Town Lake Citizens Neigh­borhood Association, organized both the protest and the community meeting, aiming to keep city officials accountable for their actions, she said.

The pressure appears to have had its desired effect: "These results and the feedback received from the community will be considered with regards to the status of Metz and Mabel Davis for [the] 2015 season," Bolin wrote. "If operational changes are made, the pool schedule will be adjusted accordingly and re-released with new information."

Whatever the outcome, it's already shaping up to be a long, hot summer – in both the literal and figurative sense of the phrase. 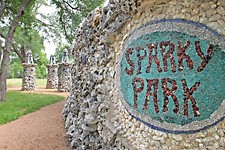