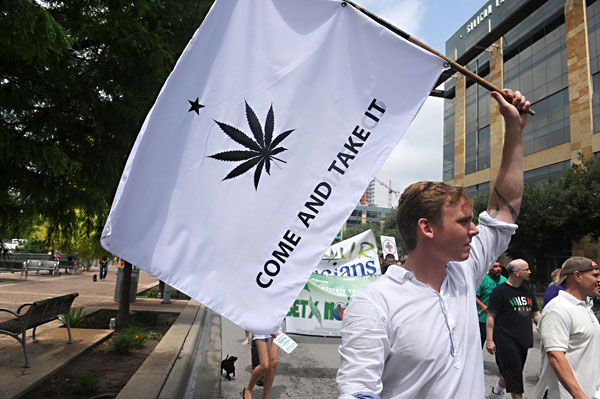 Hundreds of marijuana reform advocates met at the Capitol and marched Downtown to support the nearly dozen bills filed to lessen pot prohibitions, including legislation that would authorize the sale of cannabis oil for eligible patients and a GOP-authored bill that would fully legalize marijuana. (photo by John Anderson)

Local social media was agog this week over the Statesman's report that in March, city management hosted a staff training session by a Florida consultant mansplaining how to work with a majority-female City Council, e.g., women ask many questions, and don't like numbers. At a Wednesday press conference, Council members reacted with outrage and mockery. See "Daily News," for more.

Zoning cases dominate today's City Council agenda (May 14), with a few that might provoke wrangling, along with discussion of Monarch butterfly habitat and health insurance coverage for autism. See "Council: In the Zone."

Council spent most of Wednesday in another budget forecast work session (complete with numbers for members of ALL genders) trying to figure out a way to provide (and pay for) a homestead exemption without cutting basic services. Mayor Steve Adler's working proposal is for a 6% exemption paid for with an overall rate hike – his colleagues are hanging fire.

Austin Energy may escape deregulation for another session. Senate Bill 1945 by Sen. Troy Fraser, R-Horseshoe Bay, would open the local energy market up and allow the Public Utility Commission to set rates. With less than three weeks left in the session, it has disappeared from the calendar and seems dead.

The Austin Firefighters union agreed to a contract with the city on Monday that will provide local firefighters with a cumulative 5.5% increase in salaries, spaced out over the next two years. Prior to the agreement, firefighters had gone two years without a stable contract.

UT System Regent Wallace Hall must be given the full evidence of the Kroll Report, which examines admissions policies at UT Austin. Attorney General Ken Paxton issued an opinion that it would not violate federal privacy rules, although many suspect this is just another part of Hall's anti-UT witch hunt.