Guardians Fight On to Save SSLC

In the state Senate gallery, a group of guardians watched intently as the fate of their loved ones hung in the balance – some shed tears as lawmakers waved through a bill that would effectively evict their disabled relatives from the place they call home.

In a 26-5 vote, Senate lawmakers on April 13 approved SB 204, by Sen. Juan "Chuy" Hinojosa, D-McAllen, to direct the closure, by 2017, of the Austin State Supported Living Center – the site of state-based care for roughly 200 residents with intellectual and developmental disabilities – and to establish a commission to decide how many and which of the other 12 state supported living centers should also close.

"I was in tears, most of us were in tears. I wasn't necessarily surprised by the vote, but I was devastated by it," Judy Straughan, the mother of a 45-year-old medically fragile daughter who requires tube feeding, told me. "I was sobbing, other family members were, too. The center serves a vital need for people with profound disabilities," echoed Tammie Parker, legal guardian of her older sister, Jackie, who suffers from severe Down syndrome and has been an Austin SSLC resident since 1958. "My sister has been there all her life. She's happy, she's well cared for. Now we are being forced to rip her apart from that environment."

The shock for guardians was yet another tremor in the process to transition Austin SSLC residents from the longtime center. The legislation is based on last year's Sunset Advisory Commission recommendation to close the SSLC. Largely based on cost, Sunset also noted reports of abuse and neglect at the Austin SSLC and others, which elicited Department of Justice oversight in 2009. Families are aware of the DOJ intervention but remain steadfast in supporting the local SSLC. "If our loved ones weren't being cared for we would be first in line to put them somewhere better – they're happy, we're happy. We wish [the lawmakers] would listen to us, the guardians," said Linda Johnson, whose sister Gayla has called the Austin center home for 55 years. Additionally, an on-site evaluation commissioned by the Department of Aging and Dis­ability Services and conducted by the Texas A&M Health Science Center College of Medicine Rural and Community Health Institute found that the DOJ regulatory benchmarks were being impeded by the "lack of consistent" leadership at the Austin SSLC, which has had seven directors in just eight years. 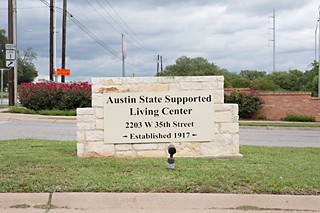 In the meantime, DADS sped up the process by downsizing the center, despite opposition from some family members. Citing high overtime expenditures amid struggling employee recruitment and retention, DADS called for the permanent closures of seven of the SSLC homes by November (see "Evicted and Helpless," Sept. 19, 2014). To date, four of the seven campus cottages have closed their doors. The current population hovers at 210; by this year, DADS hopes to remove 120 more residents. So far, 34 residents have chosen community settings; 27 have transferred to other SSLCs, and 10 others could not make a decision and are in various stages of appeals, according to DADS. Stephen Wallace and Forrest Novy are guardians of two among the 10 battling to remain at the AuSSLC – both families have filed suit, and litigation is still pending or in appeal. "We are not going to give up. There's still a fight to be had," said Wallace.

While advocates of the closure are convinced all residents will be better off in a community or group home setting, guardians of those with deeply debilitating conditions say the level of complex and comprehensive care provided by the SSLC – including specialty medical services, a pharmacy department, and an on-site infirmary – is unmatched in a community setting; placing them in that environment may very well endanger their lives, families persistently argue. Nearly three-fourths of the local residents prefer to stay at an SSLC rather than a community setting, DADS estimates. AuSSLC physicians agree that the patient population is "very complex and very fragile," requiring "significantly more care" than the usual intellectually developmentally delayed individuals, the A&M review noted. And the lack of experience with many underlying causes of IDD often means that "community providers are not prepared to care for this clientele."

Consider Mimi, who has lived at the AuSSLC for more than four decades. The 59-year-old woman needs assistance bathing, prompting for personal care, and often has seizures. "She would not be able to survive well in the community; she would wreak personal havoc," said Mimi's sister and guardian, Sarah Searight. While the legislation includes extra support for a community transition, families say that misses the point. "I would fear for her safety. She requires tremendous amounts of care and services only the SSLC can provide. We are taking her and others away from the sanctuary they've known for so long."

Repeating the arguments of community-based care groups when directing criticism toward the AuSSLC, Hinojosa made reference to the weak desire of those with IDD to find placement at SSLCs. "We don't have a waiting list of clients that want to join and be admitted to [SSLCs], but we have over 100,000 waiting to be part of community-based services. It's a huge unbalance that we're trying to correct." However, the logic appears faulty when considering the fact DADS has had a moratorium on new admissions to the Austin center since 2012, arguing that it was "in the best interest of residents and staff" to bring the facility down to "a more manageable size."

Furthermore, doubt lingers over whether or not existing SSLCs and community facilities can actually absorb the 200 residents in just two years – a concern expressed by state Sen. Kirk Watson, D-Austin, who voted against the measure after delivering an impassioned speech on the floor. "We don't even know if the places we're moving them will be identified for closure down the road," said Novy. "Why not pause until we know how to safely take care of those who can't live in the community?"

Many Austin SSLC guardians are now making the Capitol rounds, visiting with representative staffers before the House version of the bill, HB 2699 (still pending in committee) moves forward. While Watson tabled a handful of amendments for lack of support, those could potentially have a better shot in the lower chamber. Sug­gestions included striking or at least delaying closure; finding an alternative use for the AuSSLC to serve IDD residents; leasing portions of the campus for health care purposes, and combining the AuSSLC and Aus­tin State Hospital operations.