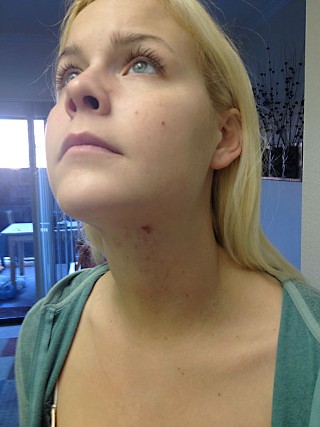 Caroline Callaway displays the injuries on her neck she says are the result of APD's blood draw. (Photo courtesy of Daphne Silverman)

After a trial that included a restraining chair from the Travis County Jail brought into the courtroom as evidence, it took three hours of jury deliberations before Caroline Callaway learned Friday night that she was acquitted of DWI charges stemming from a 2013 arrest.

Callaway, 24, registered as having a blood alcohol content level of 0.137 when she was pulled over by Austin Police Department Officer Patrick Oborski. He had seen her vehicle run two red lights on Lamar Boul­e­vard and pulled her over to conduct a field sobriety test, but Callaway refused a Breatha­lyzer and was in turn taken to central booking. Her attorneys, Daphne and Norman Silverman, were able to convince jurors late last week that there was not enough proof that Calla­way's sample had not been contaminated during its delivery into testing. APD does not seal its sample tubes after it draws blood, Daphne Silverman explained on Mon­day, and the chain of custody for each sample does not maintain a string of signatures of each person who handles the sampling.

By asking for and getting a subpoena to compel TCJ to provide a restraint chair into evidence – an unusual move in a DWI trial – Silverman was able to successfully argue that the blood drawing room was less than appropriately sanitary and that the conditions in which Callaway's blood was drawn actually made it quite possible for her sample to get contaminated. "I had a toxicologist come in who was able to explain what happens when you have potential contaminants get into the sample," she said. "She explained that there's yeast everywhere [inside a polluted setting] and that yeast is actually one of the worst contaminants for blood samples. Yeast develops into ethanol in the same way that alcohol does, and you cannot tell the difference."

Callaway still faces charges of resisting arrest and possession of marijuana, for which she is scheduled to stand trial later this year. Oborski – a recognizable name for his role in the NYE 2012 arrest of Antonio Buehler, another of Silverman's clients – testified last week that Callaway was one of the most ­violent subjects from whom he's drawn blood during his more than 13 years with APD; and the affidavit alleges that her resistance caused her blood to spray onto another ­officer.

Friday, after the trial, Silverman shared photographs of Callaway taken immediately after the arrest and ensuing blood drawing episode that show lacerations and bruises around her neck and windpipe. Silverman says that, aside from allegations of excessive force, the wounds indicate that at least one individual did not wear protective gloves when he or she handled Callaway at central booking.