Painted-over mural to be restored 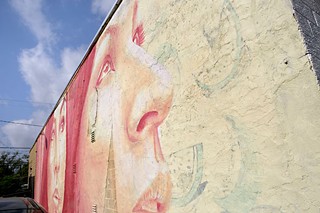 A faint outline of the Lóteria mural can be seen through the new mural. (Photo by Jana Birchum)

The iconic Eastside La Lotería mural, which was recently painted over as part of an SXSW-related art project, is now expected to be restored after community outcry. Addition­ally, advocates are stepping up efforts to save what's left of the area's public artwork in order to prevent something similar happening to another mural in the future.

As the Chronicle previously reported (see "Eastward Expansion," April 10), the mural was painted over by an artist commissioned by SXSW organizers ahead of the festival as part of its Impossible Wall Project – described online as an effort to bring local and international artists together "to transform ordinary walls throughout the downtown area into large public works of art for the Austin community." To that end, Australian graphic artist Rone painted an image of a girl's face on top of the Lotería mural outside the Cycleast store at 1619 E. Cesar Chavez. Latino community members complained they were never notified that the mural – a neighborhood fixture since 1989 – would be replaced.

"It was a disrespect to our neighborhood," said Bertha Delgado, president of the East Town Lake Citizens Neighborhood Associ­ation. "They didn't have the courtesy to make an announcement or even notify the neighborhood association."

In a statement sent to the Chronicle, SXSW project manager Lizzie Brenner wrote, "We apologize to the community for painting over the La Lotería mural. We didn't do our due diligence by talking to the neighborhood and community about the mural. We should have proactively reached out to the community before moving forward with painting the new mural. We are working with the community and property owner to get the La Lotería mural re-created. Moving forward, we will discuss any pieces that we are part of with the local neighborhood groups beforehand."

Brenner expressed similar notes of regret at a neighborhood meeting that took place after the Chronicle first reported on the mural controversy. Her sentiments echoed those of Cycleast owner Russell Pick­a­vance, who said in a previous interview that he made the decision to have the mural replaced before realizing its cultural significance to the neighborhood. "I'm aware I've hurt some people," he conceded.

Members of the community see the defacement as further evidence of a gentrification wave that continues to transform their neighborhood from a predominantly Latino enclave to one abundant in commercial development catering to a higher-income demographic. "La Lotería mural, formerly at 1619 East Cesar Chavez, served as a neighborhood icon and cultural touchstone for 30 years," reads an April 16 petition signed by various groups and arts interests – the East Cesar Chavez Neigh­bor­hood Contact Team, East Town Lake Citizens Neighborhood Association, the mur­al's original artist Felipe Garza, Hermanos de East Austin, and local artist cooperative Old Skool Kreaters. "Painted by local artists and youth through a community project supported by city, state, and federal programs, the mural was neither 'ordinary' nor 'impossible,'" it continues. "The recent destruction of La Lotería to make way for SXSW's Impossible Wall Project – the stated goal of which was to replace 'ordinary' walls – was an aggressive affront to our community. With tensions already high due to the demolition of Jumpolin and the impact of economic gentrification in East Austin, the timing of this offense ... was exceptionally insensitive."

Now, with the iconic mural being repainted, Delgado is spearheading efforts to save other remaining public artworks that have long been part of the community fabric. She's been meeting with the original artists of six different works gracing the site of the shuttered Holly Street Power Plant. Efforts to save artistic elements of the community are three years in the making, Delgado said, but are heightened after the Lotería debacle. Last year, City Council approved a beautification plan at the surrounding 90-acre Holly Shores parkland. Given such aesthetically minded advances, Delgado is ensuring the graffiti artwork by Latino artists at the former power plant is preserved for future generations.

"Along the plant are high walls that have been there for decades, and those walls have our art on them," Delgado said. "I'm working with the local artists who are in their 40s now who created the art in the Eighties as a tool to express themselves. I contacted all of them, and we meet on a weekly basis." She hopes to be able to use a portion of the city-sanctioned beautification budget allocated for the Eastside toward those preservation efforts. City Council passed a resolution in 2009 that reallocated funds from the Holly Good Neighbor Pro­gram to develop a master plan for Edward Rendon Sr. Park at Festival Beach, Fiesta Gardens, and the Holly Power Plant Site Park, toward providing an additional nine acres of parkland.

The disappearance of the Lotería mural is no isolated incident, Delgado noted. One of the murals created by Eastside artist Ramon Maldonado – the Chicano Park murals at the pool at Rendon Park – was painted over not long ago, too. "Our cultural art are masterpieces for us," Delgado said. "Some may not understand this, but it's a reflection of who we are."