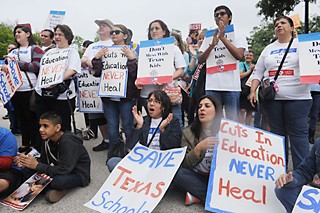 Hundreds of citizens, including Austin Mayor Steve Adler and AISD Board President Gina Hinojosa, gathered at the Capitol steps on Saturday, April 18 to urge lawmakers to invest in public education. The Save Texas Schools ralliers criticized massive budget cuts to education made in 2011 and the current Legislature’s proposal to invest in publicly funded vouchers for private school. (Photo by John Anderson)

City Council meets today (Thursday, April 23), following its Wednesday budget workshop, with the return of a couple of vexing land use issues, and more. See "Council: If You Come to a Fork ... Take It."

Texas Civil Rights Project founder Jim Harrington, 68, announced his impending (Sept­ember) retirement this week, marking 25 years since he began the foundation as a more aggressive version of the ACLU of Texas. In a release, Harrington said the TCRP has grown from two staffers to 36 and is financially healthy, and said he wants to turn to personal advocacy, "speaking and writing."

Roughly 70 members of Austin's Taxi Drivers Association gathered outside City Hall on Tuesday to lobby for 405 additional permit medallions when City Council renews its contracts with the three cab companies – Yellow Cab, Austin Cab Company, and Lone Star Cab. Behind association president Dave Passmore, the drivers also laid out initial plans for a citywide cabbie co-op, and pushed for fair regulations in accordance with the lesser-regulated transportation network companies. The city's contracts with the cab companies expire in August.

AISD trustees moved Monday to change what student information is available in the student directory, after discovering that charter schools use the data to cherry-pick kids they want to recruit.

Does Dan Patrick want a special session? After the Lt. Governor's Grassroots Advis­ory Board called Gov. Greg Abbott's plan to increase pre-K funding "godless" and "socialistic," and Patrick doubled down on property tax cuts rather than the franchise reductions Abbott prioritizes, speculation is mounting around the Capitol that he is trying to torpedo the regular session.

Former Democratic gubernatorial candidate and state Sen. Wendy Davis is back fighting for women's rights, this time with a national gender equality initiative. She hasn't yet announced the details, but told the Odessa Amer­i­can: "There are too many women right now who are staying out of the conversation, and if we joined it collectively, we could drive the conversation."

Drop that cone! Blue Bell Ice Cream, the unofficial Lone Star State frozen treat, has expanded its recall to the entire product line after listeria was detected in its Texas and Oklahoma creameries.

Missing black men: A study by The Upshot, a statistical project of The New York Times, determined that more than 15% of young (ages 25-54) African-American men are "missing from every day life." "This gap – mostly driven by incarceration and early deaths," wrote the researchers, "barely exists among whites." The study's top 10 list of cities with high rates of "missing men" include Houston and Dallas.