It's Old World Order vs. New in this week's news blast 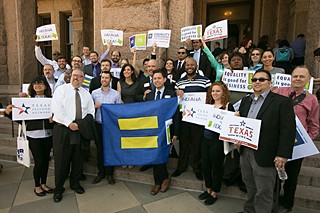 Advocates for gay, lesbian, bisexual, and transgender citizens rallied at the Texas Capitol on Monday, April 13 against the more than 20 anti-LGBT bills filed this session, including an Indiana-style so-called "religious freedom" bill allowing business owners to discriminate based on ideological beliefs. The event was part of Freedom Advocacy Day, sponsored by Equality Texas, the Texas Freedom Network, and the Human Rights Campaign. (Photo by Jana Birchum)

Mayor Steve Adler delivered his first State of the City address Monday night at the new AISD Performing Arts Center, declaring "inclusion, innovation, and intentional improvisation" as his working principles, and the state of Austin "very strong" but faced with serious challenges.

Development firm Constructive Ventures announced the Independent, to be built at the Seaholm development project – at 58 stories slated to be the tallest residential tower west of the Mississippi, featuring 370 condos ranging from the mid-$300,000s to over $3 million.

Texas Competes announced its formation this week, a business alliance with the mission of providing "a unified voice for the Texas business community on the clear economic and business case for fair treatment of lesbian, gay, bisexual, and transgender (LGBT) workers, families, customers, and tourists." Businesses include GSD&M, SXSW, Alamo Drafthouse, Samsung, AMD, and Whole Foods, among a long list of major Texas companies.

Downs Field will see $200,000 in improvements, the African American Cultural Heritage District announced Wednesday at a press conference on the historic East Austin baseball field. The diamond – home to the Huston-Tillotson Rams – is slated to receive new fencing, an entrance, and two murals illustrating its storied history.

Classroom technology was the focus of Monday's AISD board discussion, as trustees heard from the District Technology Planning Committee on not just how to spend the $39 million in tech bonds passed by voters in 2013, but also the more complex problem of integrating fast-evolving tech into the curriculum.

A computer glitch on Tuesday temporarily derailed the House's plan to pass HB 910, the "open carry" bill, as well as an estimated 125 other bills. Rep. Trey Martinez Fischer, D-San Antonio, drew attention to a report that incorrectly identified how certain ­witnesses testified on the bill in committee hearings.

Singer John Legend is in Austin today (Thursday) to speak at the Capitol in support of ending mass incarceration. The Grammy-winning singer is also expected in Del Valle, where he'll perform for inmates at the Travis County Correctional Complex.