Our strident politics demand war as the only option 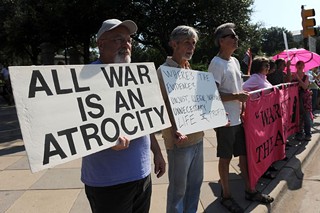 I long for a day in this country when proposals for war are debated as hotly and expansively as proposals for peace. Our polarized domestic politics are such that when President Barack Obama suggests virtually any policy, the Republicans currently in charge of Congress reflexively bring out the long knives, determined to stop or overturn whatever it is proposed from the White House. The dozens of bootless votes to reject Obamacare (working better than predicted, by the way) remain the primary example, but right now I'm thinking of the outcry over the tentative agreement on the Iranian nuclear program. GOP presidential candidates are instantly declaring the deal dead by default, and the Congressional leadership (not only Republican) is insisting that without Congressional approval, no agreement can go forward.

It's no surprise, of course, that our contemporary political arrangements and its two major parties have become locked into a Manichean dance of death, orchestrated by the politics of money and the next election cycle. But I'm thinking here of the crucial military variation on that pattern; specifically, that U.S. military actions are provided little more than a cursory review by either our media or our public officials. Yet when we seem to be on the verge of avoiding another major war – as is the case with the multi-party negotiations with Iran – suddenly our politics turns to chest-beating and threats, as though we are unable to conceive of a world in which diplomacy is actually preferable to military conflict – or (as the war lobby's hero, Winston Churchill, put it), "It's always better to jaw-jaw than to war-war."

Consider: In just how many places are we, in one form or another, currently at war? Afghanistan, Pakistan, Yemen, Iraq, Syria, Libya ... that list is only the most obvious, and if one includes areas of covert action, "assistance" to allies, or serious military presence, the list of countries jumps into the several dozens. How many of those conflicts have been subject to serious debate, let alone public controversy from the political leadership?

Generally, only when somebody suggests – as in the current instance – stepping back from the precipice of yet another war.

The Deal We Have

Yet in terms of what we know of the agreement so far, it appears to be better than the conventional wisdom predicted possible. As reported, the final agreement anticipates: Iran will reduce its refining centrifuges by two-thirds, and its stockpile of nuclear fuel by over 90%. It will shift its research away from any work that could produce weapons-grade fuel; and it will allow extensive and necessarily intrusive inspections of all potential nuclear sites.

In exchange, the sanctions imposed by the U.S. and other countries (Germany, Russia, China, France, and Britain) would be gradually lifted – the timetable for that transition still needs to be worked out, and might yet fail. But it's especially worth noting that should Congressional (or Iranian) hard-liners prevail, and the deal be undermined or rejected, the U.S. partners in the negotiations are very likely to walk away from the largely U.S.-engineered sanctions – since the entire declared purpose of the sanctions was to produce an agreement with Iran like the one now under consideration.

It could well happen that the parties will not be able to conclude a final agreement by the June deadline. But what is striking about current U.S. opposition to the pending agreement is how little of it is based on any objections to the announced terms. Reflexively, the proposal has been attacked as "appeasement," or as "capitulation" to Iran, or with the empty alternative of "ratcheting up the sanctions" (a prospect for which we have no allies).

The only real alternative to diplomacy, as the president has pointed out, is another war. Some of the opponents (e.g., John Bolton) have actively campaigned for bombing Iran, as though this were some divine right of U.S. military power. Arkansas Sen. Tom Cotton – author of the idiotic Senate letter purporting to explain the U.S. Constitution to Iranian leaders – has proposed "several days" of bombing as not really a "war" at all. Arizona Sen. John McCain suggests that Israel should do the bombing (perhaps with its own nuclear weapons?) and the U.S. should stand by Israel's side. The Iranians, no doubt, would simply shrug.

Where have we heard this before? And how many more 21st-century wars do we need before we decide there are better routes to peace than more war? What's striking is how reflexively the public conversation turns to war talk whenever there's a remote chance of a peaceful international resolution. Yet how meek, mild, and ineffective are the official voices for peace, when the troops and weaponry are always ready at hand.

Toward an Accounting
Letters at 3am