We've all seen those touchy-feely TV ads with baby deer, butterflies, and sylvan streams – claiming that Amalgamated Con­tam­ination Inc. is nature's best friend. There's a word for such hokum: greenwashing.

Leave it to the Koch brothers, however, to invent a whole new category of greenwashing. Doling out millions of their oil-smeared greenbacks, David and Charles have been buying their way onto the boards and into the exhibits and studies of elite museums of science. The fossil-fuel billionaires are using the academic and cultural prestige of these establishments to wash their filthy reputations and to spew the self-serving balderdash that climate change is a natural phenomenon, not one caused by polluting profiteers like them.

Astonishingly, David Koch was able to purchase a seat on the decision-making boards of the American Museum of Natural History and of the Smithsonian's natural history museum. The exalted Smithsonian has even allowed him to fund a Hall of Human Origins that promotes David's junk science fantasies. I know museums are scrambling for money, but come on – an infamous science-denier directing a science museum?

Maybe not for long. A new kind of museum has been started to highlight economic and political forces that shape (or misshape) nat­ure. Called The Natural History Muse­um, it's outing the Kochs and other greenwashers who're invading the public's science spaces ... and invading science itself. More than merely exposing the invaders, however, this upstart museum is recruiting prominent scientists, activating museum staffers, and rallying you and me into a spirited cultural campaign that literally can oust these hucksters, reject their tainted money, and throw junk science out of our centers of real science.

Connect with this new museum at www.thenaturalhistorymuseum.org.

Brain Busters
Adam Savage on the human capacity for knowledge 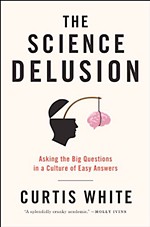