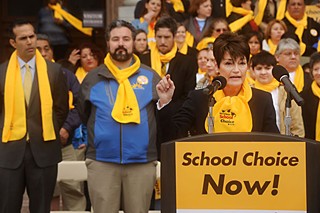 A Fix for School Finance?

Texas schools are in feeble fiscal shape. In case you had missed it, the whole public school finance system has been found unconstitutional (see "Texas School Funding," Sept. 5, 2014). And a recent study by the National Education Agency found Texas ranks 45th in spending per child in the nation. Lawmakers are not blind to these problems, so now the House and the Senate are gearing up for some ugly fights that transcend party lines.

How does the Senate want to fix these problems? By sending more kids and more public money into private schools. Enter Sen. Donna Campbell, R-New Braunfels, who never met a voucher bill she won't co-author. On March 26, she presented Senate Bill 276 to the Senate Com­mit­tee on Education. That's her proposal for a taxpayer savings grant – in other words, a voucher system. In the Campbellverse, this isn't simply a subsidy for rich families to send their kids to private schools, but an escape route for kids fleeing gangs and bad teachers. She further argued that this would not really affect school funding, because the money would still be going to education – just not to public schools. Her free market fantasy was quickly pricked, as Sen. José Rodríguez, D-El Paso, noted that private schools don't face any real state oversight or accreditation. "The only true accountability is consumer accountability," Campbell waffled, implying the free market is far better at ensuring a good education than the Texas Education Agency. Sen. Rodney Ellis, D-Houston, hammered her for trying to pull money out of state school coffers, rather than fixing what ails those schools. Then Sen. Sylvia Garcia, D-Houston, pondered, if public schools don't need more money, then why are private schools so expensive?

Cue roughly nine hours of public testimony, pro and anti, with Pastor Kyle Henderson of the First Baptist Church in Athens, Texas, as the show stealer. While he is actually pastor to a religious school, he attacked this plan as "a way to move funds into private religious schools," and condemned lawmakers for trying to instigate "a holy war" in the classroom. Fortunately for Campbell, former Sen­ate Ed. chair Lt. Gov. Dan Patrick turned up to support her bill, after he took the opportunity (and we are not kidding here) to take a selfie before he delivered his testimony.

Committee Chair Sen. Larry Taylor, R-Friends­wood, has said that bill, along with other measures, may be folded into SB 4, an empty-shell bill that will eventually house the Sen­ate's voucher-heavy reforms. However, it faces a rocky future in the Texas House, which has historically pandered to the education "reform" movement less than the upper chamber. In recent years, a coalition of urban Democrats and rural Republicans fought off the backdoor privatizers. Both fear how much vouchers gut their school districts' coffers, and charters pick off their students. House Education Committee Chair Jimmie Don Aycock, R-Killeen, announced last week that he wants to pump an additional $3 billion into the school finance coffers. He's also not afraid to attempt serious school finance reforms, and he has filed a shell bill of his own, House Bill 1759. Unlike Gov. Greg Abbott, who spent years as attorney general challenging lawsuits and stalling the legislative process, Aycock wants real change now. In a press conference last week, he said, "Do we want to do what's right for the state of Texas and the children of Texas, or do we want to sit around and try to play lawyer and out-guess the courts?"

The rhetoric will please many public school advocates. It also comes with the approval of House Speaker Joe Straus, who said he was "very encouraged by the goals articulated" by Aycock. Yet Aycock has already warned that it will be basically impossible to make everyone happy. Now the question is, how can he get the Senate on board, while fighting off their voucher plan?

The War on Classrooms

It's not just school accounts vexing education policy. On March 30, the Senate passed SB 6, introducing a new A-F grading system for campuses. The measure may have Sen. Taylor's name on it, but the initiative is really being pushed by Lt. Gov. Patrick, and passed 20-10 along partisan lines. Defending his "no" vote, Democrat Rodríguez explained that lawmakers had rejected the same proposal in 2013 because "it would cause already struggling schools to fail further because parents would withdraw their children, eventually leading to school closures and subsequent negative effects to the local neighborhood."

The legislative plan to consolidate the five agencies of the Health and Human Ser­vices Commission into one entity may be stalling, after a new report by Gov. Abbott found the agency may be so badly malfunctioning that the integration may take years, not months. Last October, the Sunset Com­mis­sion recommended the consolidation, continuing a process begun in 2003 when the Legislature reduced the total number of health departments from 12. However, soon after their report, scandals erupted: no-compete sweetheart deals for external vendors, allegations of nepotism, and inflated salaries for inner staff (see "Lege Lines," Feb. 2). Abbott launched a task force to investigate the issues, spearheaded by Texas A&M Uni­versity System CFO Billy Hamilton and Texas Department of Agriculture CFO Heather Griffith Peterson, with the unlikely duo of Center for Fiscal Policy Director Talmadge Heflin and director of the UT Children's Rights Clinic F. Scott McCown as advisers. The group has now released its report, describing the commission as being "in a state of quiet turmoil." However, it openly opposes quick consolidation, arguing that "it can be mandated, but it can't be achieved successfully." This could give extra political cover for lawmakers to slow the process: Sunset Chair Sen. Jane Nelson, R-Flower Mound, has already suggested that, until the Legislature really knows how bad internal mismanagement is, there should be no premature action.

The House passed HB 1, its draft budget, after an 18-hour slog through 350 amendments. Highlights of the increasingly incoherent debate included such odd diversions as Rep. Matt Rinaldi, R-Irving, complaining that film incentive cash helped pay for Mongolian Death Worm, and Rep. Stuart Spitzer, R-Athens, claiming the only way to get HIV is through sex (see "Texas House Funnels HIV Funds to Abstinence Education," April 1)... The March 31 special election to fill now-Sen. José Menéndez's old House District 124 seat in San Antonio sees Ina Minjarez and Delicia Herrera headed to a run-off after a dismal 2.25% turnout... Senators passed a raft of property and franchise tax reductions worth $4.6 billion on March 25, but Sen. Don Huffines, R-Dal­las, could not convince his fellow senators to simply end the franchise tax... The latest Republican plan to move the Public Integ­rity Unit out of the Travis County District Attorney's office and over to the Attorney General may be stalling: SB 10 author Sen. Joan Huffman, R-Houston, said she is short of the 19 votes needed for a floor debate... HB 40, San Angelo Republican Rep. Drew Darby's bill to strip cities' ability to regulate drilling and fracking within their borders, passed out of the House Energy Resources Committee on March 30. The committee process tightened the original draft's vague terminology, but it's still opposed by environmentalists and the Texas Municipal League.