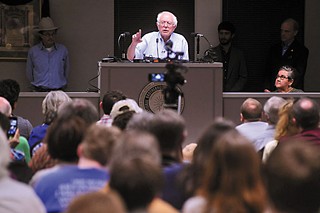 City Council meets today (April 2) on a fairly concise agenda, but with a couple of contentious questions: administrative staffing at AFD, the smoke from barbecue joints, and the ongoing discussion of adding staff ... to Council. See "Council: Where There's Smoke, There's BBQ."

The Jumpolin piñata keeps popping, with Status Labs employees forcing the resignation of CEO Jordan French for his "inexcusable" demolition of the Eastside mom-and-pop shop, but many questions remain about who did what when, and what happens now. See "Status Labs Ouster Doesn't End Questions."

AISD trustees voted March 30 to establish a new equity committee, designed to examine and analyze classroom disparities across the district. The board approved the measure 8-1, with District 7 Trustee Robert Schneider as the sole nay.

A court date of June 15 has been set for the appeal hearing of indefinitely suspended APD Officer Jermaine Hopkins, terminated from the department in Oct. 2014.

The lethal injection process took a hit Monday when the American Pharmacists Association adopted a policy discouraging its members from providing drugs to state death chambers – though the APA holds no legal authority over compounding pharmacies that work with organizations like the Texas Department of Criminal Justice.

An 18-hour debate and 400 pages of amendments: That's what the Texas House waded through before passing their draft budget, House Bill 1, by a 141-5 vote, at around 6am on April 1. Now lawmakers wait to see what numbers the Senate finally crunches (see Lege Lines).

On Tuesday, March 31, a group of women being held at the Karnes County family detention center in Karnes City, Texas, began a Holy Week hunger strike to protest their treatment. According to a letter written by one of the women, "The conditions, in which our children find themselves, are not good. ... We know that any mother would do what we are doing for their children."

On the Banks of the Wabash, far away, the Hoosier Legislature and Indiana Gov. Mike Pence have stepped in it big time, attempting to sell an anti-LGBT law as simply defending "religious freedom." Nobody's buying, businesses are abandoning ship, and Pence & GOP & Co. are into serious damage control. See Point Austin.

Meanwhile, the Texas Legislature has filed a record number of anti-LGBT bills this session. The 20 pieces of bigoted legislation include measures that would place power with the secretary of state rather than the county clerk when issuing marriage licenses, and a bill that allows business owners the right to discriminate.