Still All About the Money? 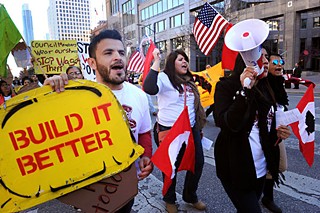 Last June, the Capital Metro Board voted to award the Plaza Saltillo development contract to the Endeavor Real Estate Group, best known in Austin for developing the Domain, among other projects. That decision came as a blow to neighborhood advocates, including members of the East Cesar Chavez Neighborhood Planning Team, who had been working for some time on a proposal with a competing group, the Saltillo Collaborative.

Lori Renteria, a member of the planning team, said she had hoped Plaza Saltillo, as envisioned by the Collaborative, "could be an international model of building a transit-oriented community." One of the benefits of their plan, in her view, was that the affordable housing units would have been priced lower – with units available not only for those earning 60% of median income, but also for those at 50%, 40%, and 30% – and would have included three- and four-bedrooms for larger families.

At the time of the decision, the Chronicle reported that "Saltillo Collaborative team leader Lorenz expressed disappointment over a decision that ran counter to what neighborhood stakeholders had wanted for the site. 'When someone – or some board says – "it is not all about the money," it really means "it's all about the money,"' he said." (See "Plaza Saltillo Decision Comes Down to Money," June 24, 2014.)

The decision to go with Endeavor was decided by a single vote, after the Cap Metro board twice deadlocked. Then-Council Members Mike Martinez and Chris Riley, as well as Leander Council Member Dave Siebold, all voted for the Collaborative, while Norm Chafetz, Terry Mitchell, Beverly Silas, and Ann Stafford voted for Endeavor. John Langmore decided to switch his vote to Endeavor after its representative, Jason Thumlert, told the board that Endeavor would be willing to "entertain an agreement with that specific group [WDP] and the terms that are being proposed for the other developer as well," as Martinez put it at the time.

Nearly a year has passed, and Endeavor and WDP have yet to reach an agreement, although representatives from each organization have met. According to WDP, part of the problem was that it took a while for Endeavor representatives with the decision-making power to commit to terms to make it to the table. However, talks are now under way.

Endeavor had included living wages for workers as part of its proposal, but WDP would like to see the company agree to each of the requirements of its Better Builder Program, which include not only living wages, but also OSHA-10 safety training, workers' comp insurance, local hiring goals, and on-site monitoring. On-site monitoring by WDP would make sure that workers are being treated fairly in practice, both WDP and the planning team believe.

The planning team has passed a resolution asking "that Endeavor fulfill its commitments to form a community advisory group, work with stakeholders, and sign Workers Defense Project Better Builder certification to ensure that development of the Plaza Saltillo tract be fair, sustainable, and equitable."

Council Member Pio Renteria, who had argued for the Collaborative's proposal as a member of the planning team, believes Endeavor has time to agree to further worker safety standards. "They're still going through the planning process," he told the Chronicle. Plaza Saltillo Ground-breaking Set for Wednesday
After a long wait, the Eastside redevelopment finally kicks off