Paying Out of Pocket for Autism 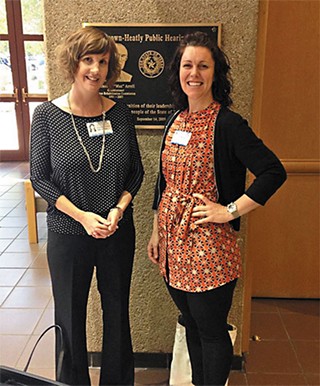 In July 2013, four months after her family's life was changed forever, Lisa Whitted learned that the older of her two children had been diagnosed with autism. The news was not surprising – 2-year-old Quintin had begun reverting into his own cognitively uneven mind – but it introduced another element to an already emotional household.

That March, on the first morning of the month, her husband Jonathan, an Austin Police Department officer of nearly four years at the time, shot and killed 70-year-old John Schaefer after an armed altercation on Schaefer's property. A grand jury declined to indict Jonathan in the shooting, and he received no departmental discipline. Last month, Schaefer's son filed a lawsuit against APD and the officer. On administrative leave (departmental policy after an officer exercises lethal force), Jonathan had to wrestle with the reality that he was directly responsible for taking a man's life. And Lisa, as she admits, would "have to come to terms with the fact that I am married to and love someone who killed someone."

The two realities – their son's diagnosis and the emotional aftereffects of Schaefer's shooting – became even starker when the Whitteds learned Quintin's recommended treatment: "applied behavior analysis," a physiological intervention program demonstrated to provide substantial gains to the social and adaptive behaviors of diagnosed children (and some adults). ABA treatment can take as little as four hours per week or, in truly unique cases, upwards of 40. Quintin was recommended 10. Doctors couldn't guarantee results, but the Whitteds felt it was their only hope.

Except Jonathan's salary was already spread thin supporting his wife and two kids (their second child, Juniper, now 2-and-a-half, was diagnosed with autism last August), and a mortgage. He couldn't pick up overtime pay during the six weeks of administrative leave. Quintin's ABA treatment cost $700 every week. The Whitteds refinanced their cars, emptied their savings, and maxed out credit cards. Jonathan worked massive overtime loads – forgoing needed post-traumatic therapy – when he did return to duty. And Lisa, who'd assumed the role of single parent while Jonathan worked overtime, tried to make sense of how a method of treatment so essential to her children's well-being could be omitted from the city's health care coverage.

In the spring of 2014, the Whitteds came into contact with Imagine a Way, a local assembly of philanthropists who help families struck by autism pay for necessary health care. The group funds all necessary treatments for participating children until age 6 – be it speech therapy, occupational therapy, music therapy, or ABA. Quintin reaped the benefits almost immediately, and so did Juniper that August after diagnosis.

That same month, through Ann Hart, then the president of the Autism Society of Central Texas, Lisa met Jacqueline Benestante, the wife of an Austin firefighter and mother to a 10-year-old with autism. For four years before Lisa's efforts, Benestante made such a racket trying to get ABA treatment on the city's health care plan that the employee benefits manager who dealt with Lisa once asked her if she was Jacquie.

Lisa wasn't, but she was glad to have finally met her. Benestante had data, price points, endorsements, and figures that suggested Towers Watson's cost estimates were inflated. ABA treatment could cost the city $1 million, if every patient requires 40 hours. But the actual figure is merely a fraction of that. Since August 2013, Quintin has received 10 hours of treatment every week; his sister Juniper gets only four.

In fact, data provided by Autism Speaks reports that costs associated with autism treatment often fall well below governmental allocations. South Carolina, Louisiana, and Arizona each made serious overestimates, compared to actual claims. Most strikingly, one year in South Carolina saw only $856,000 spent of an initial $10.6 million estimated to cover autism – a difference of 1,237%. Figures from 2014 indicate that only 17 children in the COA health plan between the ages of 1 and 9 suffer from autism, and only 48 individuals in total. Employees in the Austin Independent School District receive coverage for ABA, as do those covered by Travis County.

Last September, Lisa Whitted and Bene­stante campaigned to get ABA coverage added to the city budget, but they were told their efforts were too late for this year. They've since received the support of the Austin Firefighters and Police associations, as well as the Mayor's Committee for People With Disabilities.

In late January, Benestante ran into Council Member Delia Garza, a former firefighter, at a fundraiser event thrown by the wife of a former colleague. "She bent my ear a little bit," remembers Garza. "I couldn't believe that the city didn't cover these types of benefits." The two agreed that Benestante should meet with Garza's staffers. "After doing a bunch of research," continues Garza, "it just didn't seem that it's as cost-prohibitive as the city's saying that it is."

Last month, Garza began her plan to get coverage for ABA treatment included in the city budget, and in April, she will present a resolution to the Health & Human Services Committee. Council Member Ann Kitchen has been supportive, as has Mayor Pro-Tem Kathie Tovo. "There's more awareness toward it now," says Garza of autism. "I think everybody should have as much health care as they can get."

One need look no further for advantages of applied behavioral analysis than the Whitteds' two kids, Quintin and Juniper. Socially repressed when she was younger, Juniper's now getting invited to other kids' birthday parties. Even Quintin is beginning to turn a corner.

"At his lowest, this was a kid who sat in a corner spinning lids," said Whitted. "Spent all day crying, clawing, scratching, and biting. ... Now, he's starting to figure certain things out."

This story has been updated to properly identify Quintin’s recommended treatment and clarify Ann Hart’s position with the Autism Society of Central Texas.