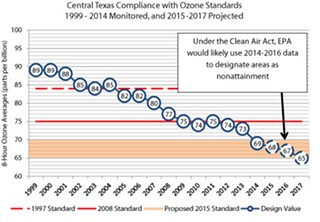 The thing about air pollution is that it doesn't stay put. Emissions from Central Texas cars, power plants, and refineries make their way to places downwind – often San Antonio, sometimes Temple. At the same time, emissions created elsewhere end up here. Often they blow in from the north (as far away as the Ohio River Valley) or the south/southeast. For instance, Louisiana will soon be responsible for 2 parts per billion of Central Texas' ground-level ozone (O3), according to Environ-mental Protection Agency data. That may not seem like much, but it's enough to nudge the region into "nonattainment" of EPA standards – a designation that could have economic consequences for decades. According to Andrew Hoekzema, air quality program manager for the Capital Area Council of Governments, that close-call scenario is exactly what Central Texas may be facing under new O3 standards proposed by EPA.

Based on a new assessment of health impacts, the EPA has proposed a 65-to-70ppb limit on O3 levels (down from the current 75ppb), to take effect in 2017. According to CAPCOG's analysis, Central Texas is poised to meet a 70ppb standard given an overall downward trend in O3. However, the region will be off by just a hair if EPA implements the more stringent standard (65ppb). Not only will O3 levels miss the mark by just 2ppb, but they will likely do so for just one monitoring season. "Looking right now, we will miss it by a year," says Hoekzema. "We will be over 65 by the end of 2016, but we may be able to reach 65 by 2017." (See graph.)

Although O3 will continue trending downward, that brief juncture spent in breach of the standard could have significant consequences. A nonattainment designation would subject the Austin-Round Rock metropolitan statistical area to new planning restrictions, such as emissions-offset requirements of 110% or more, says Hoekzema. Such requirements could be costly enough to limit growth in the region. "Samsung has, for instance, indicated that their recent expansion would not have occurred here had our area been designated nonattainment," says Hoekzema.

While these restrictions would likely be short-lived, others would not. Under transportation conformity requirements, for instance, projects such as highway construction would be subject to expensive and time-consuming analyses. According to Hoekzema, amendments to the regional transportation plan "that would take maybe a month or two under an attainment situation would now take nine months to a year." Moreover, once the region regained attainment status, it could be placed under a "maintenance" plan prolonging the restrictions. "Transportation conformity requirements can last for even 20 years after an area comes back into attainment," he says.

For Central Texas, this situation would be a particularly bitter pill to swallow. Through their participation in the Clean Air Coali­tion, the jurisdictions of the five-county, 13-city MSA have worked together for 15 years to improve air quality. They have implemented a variety of programs intended to keep the region in attainment (e.g., idling restrictions, rideshare programs, and energy conservation measures). Some programs, such as vehicle emissions testing, are "frankly well beyond what would be required even under a nonattainment designation," says Hoekzema. For such efforts, CAC and CAPCOG have been recognized as a model for voluntary regional air quality planning and were honored in 2014 with an EPA Clean Air Excellence Award.

Still, there's room for improvement, says Sierra Club member Scott Johnson, a veteran of local air quality planning efforts. For instance, he says, idling restrictions would benefit from greater enforcement, tailpipe emissions should be more closely monitored, and funds for unproven outreach efforts should go to mitigation. Overall, he believes current strategies would be more effective given a greater focus on such improvements. "But that has not been done, much to my chagrin," he says. At an EPA hearing in Arlington in January, he spoke in support of a strengthened standard. In Central Texas, a 65ppb target would "galvanize the effort to do more to look at the existing strategies and try to improve those," he says.

Earlier this month, ahead of the March 17 deadline for public input, the CAC submitted a comment letter to EPA. Rather than weigh in on a preferred standard, the CAC requested that EPA consider adjusting how it assesses compliance. The current approach, says Hoekzema, is subject to too much variability. "If areas are popping over that line [of compliance] back and forth, that's not good for air quality planning," he says. Developed by CAPCOG staff, the recommendations are intended to create a metric less sensitive to data outliers. For example, per monitoring season, EPA allows a certain number of exceedances of the standard. CAPCOG's analysis shows that allowing just one more exceedance should keep Central Texas in attainment.

EPA might also consider simply deferring nonattainment designations for a year for areas close to the standard. After all, says Hoek­zema, O3 monitoring instruments have a 7% margin of error – the equivalent of about 4ppb. The letter also encourages EPA to implement long-delayed Clean Air Act requirements addressing emissions traveling from other states, such as Louis­i­ana. Finally, it asks EPA to reward good behavior – go easy on restrictions for nonattainment areas that have undergone voluntary emissions-reduction efforts, it suggests.

If the recommendations don't sway EPA, a plan B awaits in the form of a draft letter to Central Texas Congress members asking that they consider changing the CAA itself to "provide significant regulatory and economic relief for Central Texas." With an EPA ruling not expected until October, the CAC tabled discussion of the letter at its March 11 meeting. For now, the individual jurisdictions can decide whether to amend it, send it, or sit on it.

In the meantime, there is reason to believe EPA might listen to the CAC. According to CAPCOG's analysis, the recommendations do not sacrifice public health benefits achieved by the stricter O3 standard. Moreover, says Hoekzema, other regions – having seen CAPCOG's analysis – have submitted similar recommendations to EPA. "We've gone above and beyond what's required of us under the Clean Air Act," he says. "Central Texas to some extent has earned the right to be heard by EPA on these matters."