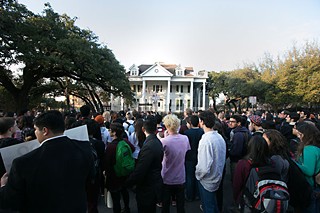 Students rally against racism, outside the Fiji house in February. (photo by Jana Birchum)

Many students and faculty were upset about the party and, though skeptical, hoped that the administration would take bold action against Fiji. At the time, Marilyn Russell, coordinator of sorority and fraternity life in the Office of the Dean of Students, told the Chronicle, "To be skeptical is premature because nothing has come of this exact case right now." (See "Frat Party Fallout," Feb. 20.)

However, a week later, the official UT-Austin Twitter account tweeted, "While the behavior doesn't mirror UT core values, it's within students' right to freedom of speech at a private off-campus event." UT Senior Associate Vice President for Student Affairs and Dean of Students Soncia Reagins-Lilly told The Daily Texan that because the party didn't violate any university rules (primarily because it was an off-campus event), the frat faces no penalty, though UT is working with Fiji to increase the frat's "cultural sensitivity."

Christian Umbria Smith of UT's chapter of the League of United Latin American Citizens (Longhorn LULAC) said that the response was "somewhat expected. And it's not so much that we don't have any faith in their ability to tackle student issues. I mean, President Powers has stood with us when it came to affirmative action policy, among other things." Still, he says, the response has, yet again, been just "words, but no actual actions." Yes, Smith says, it's good that the administration has made supportive statements, but they need to take concrete actions as well.

UT-Austin is no stranger to dealing with issues of racial insensitivity on campus, and the university is far from alone when it comes to these issues. The problem of racism in fraternities has recently gone viral, after a 10-second video of University of Oklahoma Sigma Alpha Epsilon (SAE) members chanting racist slurs and making reference to lynching was leaked to the OU student paper.

For UT-Austin student Cat Tran, both the Fiji incident and the OU SAE video draw "attention to the legacy of racism that penetrates institutions, especially in the South, and how exclusion of minorities has historically been the norm, not the exception."

In contrast to UT's reaction (or lack thereof) to Fiji, OU's response to SAE was swift and powerful. The video leaked on Sunday, March 8, and by the next day, OU President David Boren had ordered the fraternity to be removed from OU and expelled two of the students seen leading the chant in the video. The video's publication also caused promising high school offensive tackle Jean Delance to reconsider his previous commitment to OU, and led to a protest by the school's current football team.

Smith said that he and many others considered OU's reaction to be encouraging and "very respectable." "It was good, but it was also disheartening to see that we didn't have that same level of vigor when it came to how the administration of the campus responded. Granted, there are differences," Smith said.

Following the OU SAE controversy, UT President Bill Powers issued a statement, which read in part: "Both of these incidents were hurtful and offended many. I deplore this behavior, which is contrary to the core values of the University of Texas at Austin."

He went on to point out that an alleged photo of "Fiji Pledge Rules" that had been in the news first "appeared in 2007 and was largely believed to be a hoax even then."

For some students, this statement was far from adequate. "The fact that President Powers would have such a dismissive response to racism at UT and insist that our commitment to diversity is sufficient makes me feel like my concerns don't matter," Tran said. "I think it's tremendously important for UT to assure students of color that they're listening. I think we need to have an open discussion about race rather than continuing to sweep it under the rug."

In his statement, Powers also addressed claims that UT's SAE chapter also performs racist chants. The Office of the Dean of Stud­ents launched an investigation into the allegations, and on March 11, Reagins-Lilly issued a statement saying that UT's SAE chapter does "not perform the chant or anything similar" and that "such behavior [has] no place in their organization." Still, the statement claimed that the office "is also reaching out to former and current students involved with SAE for a more complete review."

In an interview with the Houston Chron­icle, UT SAE President Luke Cone said that the OU SAE video "was deplorable. It's not what we stand for here at SAE at the University of Texas." Regarding the allegations against the UT SAE in particular, the 21-year-old petroleum engineering student told the Houston Chronicle, "Of course, we've got a target on our back. We're a very big university ... Everyone wanted to bust us." Cone went on to say that the chapter is diverse and would not tolerate any policy barring people because of race. Still, the chapter has no African-Americans among its 230 members.